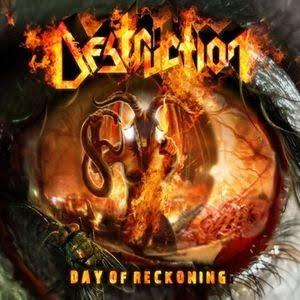 Five years ago the legendary German Thrash metal trio Destruction decided to release a collection of re-recorded classics under the title “Thrash Anthems” – a collection which I remember describing as ‘not a release worth having’, much to Schmier’s (bass/vocals) annoyance. The point I was making was that the band ought to focus its energy on releasing an album that will stride into the future with confidence while, at the same time, honouring Destruction’s past, something which Schmier translated as criticism of anything new they might release. Guess what – five years later, Destruction have managed to release the album that I was hoping for them to come up with – an eleven track monster of energy and passion, entitled “Day Of Reckoning”, which is sure to blow your minds!

Following the release of 2008’s “D.E.V.O.L.U.T.I.O.N”, the band employed the services of drummer Vaaver (Wawrzyniec Dramowicz) and signed a new contract with the quite prestigious label Nuclear Blast records. I cannot really say whether it was the move to this high profile label that forced Destruction to step up their game and create this colossus of an album, but I can indeed confirm that Vaaver’s dynamic and often technically challenging drumming has allowed Mike Sifringer’s trademark riffs to come across as much sharper than on previous albums, providing a platform upon which Schmier presents us with his highly aggressive, and often multi-layered, vocal performances. Simply put, aggression and passion are back with a vengeance and now we can all hail Destruction once more as the really dangerous outfit that we all came to know and love throughout the years.

When I started listening to the album I did so without any major expectations and I was almost reduced to tears of joy when I came across the furious old-school riff of the opening track “The Price” – a riff whose intensity almost blew me away! Vaaver’s drumming skills are clearly audible in the galloping tunes of the mid-tempo opus “Hate Is My Fuel”, a song that features one of the best sing-along refrains of the album! In “Armageddonizer”, Destruction are looking towards Exodus for inspiration and the end result is both diverse while “Devil’s Advocate” will give you the opportunity to work your neck muscles. Though one of the shortest compositions of the album, the same-titled “Day Of Reckoning” is, simply put, its absolute highlight, since every riff, every guitar melody, every drum part and every vocal line, are of the highest quality and work together to present the listener with what can only be described as a classic in the making. “Sorcerer Of Black Magic” was quite a surprising composition as it is both melodic and aggressive (the melodies being highly reminiscent of those used by fellow-countrymen Rage), paving the way for more riff-orientated shredders, such as “Misfit” and “Church Of Disgust”. The last great surprise of the album comes in the shape of a five track groovy-sounding composition, “The Demon Is God”, which, together with “Destroyer Or Creator” and “Sheep Of The Regime”, provide an impressive close to this amazing album!

I am not sure whether my feelings towards this album came across clearly in the above lines so, just in case that they haven’t, let me clarify this one for you by saying that I am absolutely ecstatic about “Day Of Reckoning”! I feel slightly vindicated in my abovementioned comments to Mr. Schmier, since I have always championed the notion that this is exactly the kind of album that a band of the importance and the historical significance of Destruction ought to be releasing, both for the new and the fans of old! Thrash Metal has always been all about pride, power and aggression – elements of which can be found in abundance on the eleven compositions on offer. That is why “Day Of Reckoning” stands out from all of the band’s releases post 2000 era and that is why it has been given top marks here. Best Thrash Metal album of the year? Quite early to say, but that is most probably the case!