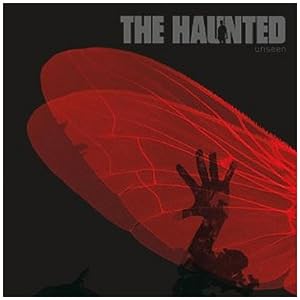 Sixteen years ago and following the demise of the much revered and totally influential melodic Death Metal outfit At The Gates, brothers and founding members Anders and Jonas Bjorler began to look for other musicians with the hope of filling the massive void that was created as a result of the above-mentioned break up. It was not long before the band filled the position of the vocalist with the unique sounding and massively outspoken Peter Dolving, with whom they recorded the critically acclaimed debut “The Haunted” (1998), before falling out and moving their separate ways. Luckily for us, Peter returned to The Haunted in 2004, thereafter releasing a number of albums, the latest of which is the twelve track opus “Unseen” whose release is scheduled for the end of March.

Those of you who have read Peter’s recent statements on the net are probably feeling quite anxious as the moment, as expressions such as ‘quite melodic’, ‘different’ and even ‘pop sounding’ were mentioned in abundance over the last few weeks. Should you be worried? Well, yes! Staying true to his word, Peter, with the help of the remaining members of the band of course, came up with what I can only describe as the most varied and potentially controversial album in the history of the band! It is the only The Haunted release that I can think of where you will find heavy stoner riffs combined with pop-sounding choruses, but also, it is the only The Haunted release where such unusual combinations make absolute sense! Having said that, it did take a few really good spins prior to me appreciating this release, so if you find yourselves initially ‘lost’, do persevere and you will certainly be rewarded!

“Never Better” is the typical up-tempo modern-day Thrasher that you expect to open a The Haunted album so I was not surprised to find it there; what I was totally surprised by was the heavy groove of “No Ghost” – a song that could easily have been written by Black Label Society and which is an absolute belter! “Catch 22” is another killer track, with melodies being heavily influenced by those of fellow-countrymen Katatonia. What the triad consisting of “Disappear”, “Motionless” and “Unseen” has in common is the use of Tool-influenced lead guitar harmonies and catchy refrains with a melodic nature the quality of which you have never come across in any The Haunted album before. The song that totally blew me away was and is “The Skull”. What we have here is a four minute epos which combines a Queen-sounding, multi-layered vocal intro with heavy as hell down-tunes riffs – a song that I am absolutely mad about and which I consider to be the absolute highlight of the album! “Ocean Park” is a very short acoustic guitar theme while “The City” utilises once more the band’s ability to create memorable harmonies. “Them” is another classic-sounding riff-orientated gem that leads the way to the far more daring “All Ends Well” – a varied composition whose melodic appeal will most likely freak out all of the band’s old school fans. The album closes with “Done” – another varied but also quite emotional piece that will challenge any misconception or limited understanding that you may have created of what The Haunted stand for.

When I first started listening to this album I was quite sceptical and, if I am to be totally honest with you, somewhat perplexed by what Peter Dolving and Co have created here. The more I listened to the twelve compositions on offer, though, the more I appreciated the effort and skill behind this impressive album. I know that those of you who adore the first two albums from this band will find it quite difficult to understand what it is that I am talking about here, or why you should be bothered to invest in this release, right? Maybe the reason why you should get your hands on this album, apart from the fact that the music on offer is so damn good, is because, simply by releasing it, The Haunted stayed true to the main principles of this great music that we all know and love: i.e., being daring and innovative. A new era has begun for this great band and I, for one, am more than willing to pledge my full support to them! Well done guys!