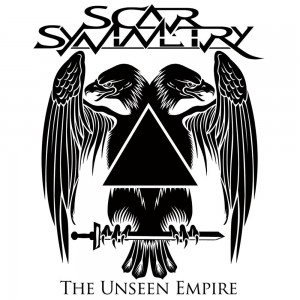 Scar Symmetry is a Swedish Melodic Death Metal outfit whose early work I am quite familiar with, seeing as I was assigned to do reviews for both their debut “Symmetric In Design” (2005) and its predecessor “Pitch Black Progress” (2006) back in the day. For reasons that are not relevant to this review, I lost touch with the band’s activities for almost five years – a period which saw them further establish a working relationship with their label Nuclear Blast by releasing two more highly acclaimed albums. My decision to review the band’s latest studio effort “The Unseen Empire”, as you may well understand, was not simply based on the fact that my past memories of the band’s music were quite positive, but also because I was curious to find out how much the Avesta-based sextet has evolved over the years.

After giving this album a fair amount of spins and looking back on the things that I said about the band’s first two releases, I realised that quite a few things have indeed remained the same with regards the band’s approach to song writing. Though fairly varied and daring, all of the nine compositions on offer depend on a melodic vocal line for stamping their authority and they all feature at least one flamboyant guitar solo, courtesy of founding member and axeman supreme Per Nilsson. In addition, there is a variety of brutal vocals and low-chorded riffs whose purpose is to stir the waters of the band’s creativity and present something different than most Melodic Death Metal bands. So, where is it that things went wrong? Well, let’s just say that while adding a few extra elements to your music may help solidify an album, adding too many will eventually create the opposite effect. Though pleasantly surprised by the band’s ever increasing levels of skill and execution, especially with regards the guitar work, there were a few moments when I felt confused and losing my focus of the proceedings – something I thought was quite unfortunate.

This album’s musical diversity is evident when comparing the first two compositions, namely “The Anomaly” and “Illuminoid Dream Sequence”. While the former contains such melodic lines, both vocals and guitars wise, to the point of coming across as a pop composition, the latter is a full on riff orientated guitar monster that features an array of brutal vocals and spacey keyboard themes. “Extinction Mantra” was the first composition that really stood out due to its successful mixture of oriental melodies, metalcore riffs and the Soilwork-sounding melodic refrain. More such influences can be found in the follow up “Seers Of Schaton”, a song which however comes across as less coherent in comparison while the four minute “Domination Agenda” is another attempt towards easily-digestible commercial success. Melodies of a more atmospheric fashion are cleverly combined with brutal vocals and low-chorded massive-sounding riffs in “Astronomicon” and fans of the six string will be amazed by some of the flamboyant guitar solos that are featured in “Rise Of the Reptilian Regime”. A song where all those diverse elements that I described above work in perfect unison is the five and a half minute “The Draconian Arrival”, enabling the much more straight forward “Alpha And Omega” to put the finishing touches to the band’s fifth studio effort.

What do I think of Scar Symmetry, having listened to “The Unseen Empire” more times than I care to remember? Pretty much exactly what I did the first time I laid my hands on their debut release six years ago – this is a band with much skill that has some way to go prior to reaching its full potential. I am genuinely happy by the fact that Per Nilsson and co are in constant search of new ideas and sounds and I will forever support them and any other musician who chooses not to play things safe; however, I do also believe that sometimes it is wise to step back and think of your next move rather that constantly pushing something that may not necessarily be heading in the right direction. I have much faith in this band – hopefully it won’t be long before my instincts prove me right and we see them move to the next level.