BRAINSTORM – “ON THE SPUR OF THE MOMENT” 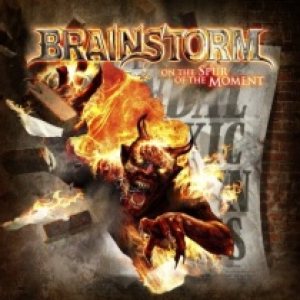 I quite recently had a conversation with a group of musically like-minded people, during which the topic of modern Power Metal was raised. One of the main conclusions of this long and fairly interesting conversation was that my definition of what decent Power Metal is all about seems to be inherently different than that of most young people nowadays. You see, while most fans of the genre opt for the most melodic and gimmicky outfits such as Powerquest and Hammerfall, I find myself drawn more towards more dynamic outfits as the sadly late Nevermore and the German riff masters Brainstorm, the latter being one of the most quality-wise consistent band that I can think of.

Less than two years since the release of “Memorial Roots” (2009), an album that scored really high in my ‘appreciation board’, the Heidenheim quintet is back with a new studio album that’s entitled “On The Spur Of The Moment” – an album that contains quintessentially classic Brainstorm material which is also bound to catch a few people by surprise. Why? Well, these last few years, we have all been used to having these fine Germans creating compositions that are predominantly based on catchy vocal melodies, melodies which are further supported and enhanced by crunchy guitar riffs. Thought such melodies are still in existence, it is ‘the riff’ which gets a leading role in the majority of the compositions on offer, thus making the album come across as one of the most dynamic and powerful ever to have been recorded by this band.

The band’s ‘classic meets modern’ or ‘heavy meets melodic’ approach could not be better demonstrated that through a comparison between the first two compositions of the album. While “Below The Line” is a keyboard-infused, choral-laden anthem whose catchy chorus and sing-along refrain renders it an instant classic, its follow up “In The Blink Of An Eye” is founded upon a rhythmical riff which could easily had been the product of a Thrash Metal outfit, had it only been a tad faster. Similarly straight-forward and lacking the pompous themes of the opener, “Temple Of Stone” is further evidence of the band’s intention towards a ‘back to basics’ approach. Though I thoroughly enjoyed both these tracks, by that stage I begun missing the catchy tunes that this band has become famous for and so it was with a great relief that I welcomes the cleverly orchestrated and immensely catchy “In These Walls” – one of the best compositions of the album whose refrain still resonates in my head as I write these very words.

The band’s love for classic Metal and the likes of Judas Priest is clearly audible in tracks such as “Still Insane” and “Dark Life” while the acoustic guitar intro and band vocal refrain of “No Sinner – No Saint” comes across as a form of tribute to the mighty Helloween. By that stage, most albums would have already made their final impact, but Brainstorm’s ninth studio effort still has a few aces up its sleeve. As if the honest sounding Heavy Metal gems “Where Your Actions Lead You To Live” and “A Life On Hold” were not enough, the album concludes in a dark and pretty bombastic fashion through the five minute opus “My Own Hell” – a composition which depends as much on eerie orchestral arrangements as it does on low-chorded heavy riffs for effect, making this by far the darkest composition ever recorded by the band.

Brainstorm are one of the few Power Metal bands that I can think of who have been both brave an intelligent enough in re-inventing enough since their inception back in 1989 and “On The Spur Of The Moment” is a living proof of such a mentality. I am happy to see a band as experienced and musically gifted as them choosing to spice up things rather that resting on their laurels, resulting in the creation of a very interesting and musically varied album. Their choice of investing less on their trademark melodic choruses and refrains means that it will probably take more that the average couple of spins in order to get what this album is all about but, as with most good things in life, your patience and perseverance will definitely be rewarded. Invest without fear!