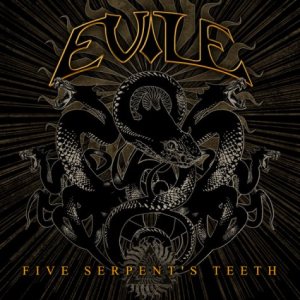 Five years ago, something totally unexpected happened! Thrash Metal, a genre whose popularity began deteriorating since the mid 90s and which, for a pretty long time, remained alive only in the memory of those of us who were proud enough to present ourselves as its supporters, was once again getting label attention!

How did it happen? Many different theories exist, all of which seem to agree on one thing; the pivotal role of numerous young bands whose passion and commitment forced many labels to reconsider how and where their annual budget ought to be spent. One of the bands that, according to media and fans alike, spearheaded this ‘resurgence’ is the Huddersfield-based quartet Evile, now ready to release their third studio album “Five Serpent’s Teeth”.

I am probably one of the few people who never got massively impressed by either “Enter The Grave” (2007) or “Infected Nations”(2009), which is indeed quite a frustrating thing based on the band’s ability in creating good quality riffs, so it was with a great deal of expectation that I began listening to the ten new compositions on offer.

Two things that I noticed almost immediately were the massive improvement in Matt Drake’s vocal performances and also the use of a great variety of styles in the song writing process – what remained was to figure out whether this will be a release that will eventually convert me into an Evile fan.

Five days after I first downloaded the album and many, many spins later I realised what my issue has always been with regards this band; while each individual riff and melody employed are of high quality, they do not always work together in harmony, resulting in many compositions coming across as lacking coherence. This is what ‘plagued’ the band’s music in the past and which sadly, though to a much lesser extent, continues to be the case here.

It was indeed a great idea to open the album with the five and a half minute “Five Serpent’s Teeth” as its up-tempo Exodus-influenced riffs and Dave Padden (Annihilator) sounding vocals were both quite welcoming to my ears. While this simple composition scored massive points, its predecessor “In Dreams Of Terror”, though more up-tempo and dynamic, comes across as a collection of individual riffs and melodies rather than a coherent piece of music.

“Cult” is a slow groovy riffed opus whose Hetfield-like vocals and distorted riffs certainly betray the band’s admiration of Thrash legends Metallica while “Eternal Empire” confused me once again with its lack of direction. Being a massive fan of Voivod I was naturally drawn to the opening harmonic guitar theme of “Xaraya” and by the time I was introduced to its technical riffage and twin guitar melodies I knew that this would be one of the highlights of the album!

While soon losing interest in “Origin Of Oblivion” I was totally blown away by the commanding riffs and lead guitar solos of the mighty “Centurion” and was also quite moved by the quite melodic and moody themes of “In Memoriam” – the band’s fitting tribute to their fallen comrade Mike Alexander.

Sadly this momentum is not continued in “Descent Into Madness”, another track somewhat lacking coherence, something that cannot be said about the closing opus “Long Live The New Flesh” – a five minute belter filled with heavy riffs and flamboyant solos, courtesy of the six-string ‘maestro’ Ol Drake.

If you asked me two weeks ago what my opinion was of Evile, my answer would probably be that they are a group of highly skilled musicians with no unique musical. Now that I ‘lived’ with “Five Serpent’s Teeth” and I have witnessed the band’s willingness to evolve and search for unique ways of expressing their love for the likes of Metallica, Exodus and Annihilator, I can say that I find myself quite sympathetic to their cause.

There is a fine balance between creating very simplistic and overtly complicated compositions, one that I feel that they have not quite mustered at this moment in their career. Once this balance is achieved, they will inevitably manage to convince both myself and all those numerous old-school Thrash fans that they are not a copycat band but a group of artists with a great future. I really hope that this happens soon, as it pains me to give their work a relatively average rating.