SOLITUDE AETURNUS – “IN TIMES OF SOLITUDE” 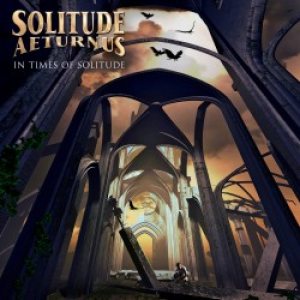 Twenty three years ago, following the demise of the Thrash Metal outfit Rotting Corpse, guitarist John Perez decided to invest all his love and passion for Candlemass influenced Doom Metal in a new group – a quintet that was given the name Solitude. Under this moniker, John and his fellow musicians will release only one five track demo tape entitled “And Justice For All”, following which they changed their name to Solitude Aeturnus and released some of the most epic-sounding Doom Metal albums in living history. The fact that this great band is mainly known outside the Doom circles due to Robert Lowe’s vocal contribution in Candlemass is not only unfair but downward shameful; however it has raised the band’s profile enough to enable it to release material such as that featured in the ten track CD “In Times Of Solitude”.

I have been long waiting for the successor of the amazing “Alone” (2006) to grace me with its presence, and I was really hoping that what is here on offer would be exactly that, the new Solitude Aeturnus studio album, but that is not the case. “In Times Of Solitude” is a collection which features all those songs that were originally featured in 1988’s “And Justice For All…” demo tape, plus two additional rehearsal tracks and one live take of “And Justice For All” from the same era – all those things that the loyal followers of the band have been dying to get their hands on but could only really get from sites like EBay, having first inflicted a substantial blow on their bank accounts. What remains to be established then, having ensured the interest of the band’s fan base, is whether “In Times Of Solitude” will appeal to the rest of you mere mortals out there.

Well, the fact alone that three of the five songs from the Demo tape found their way in the band’s legendary debut release “Into The Depths Of Sorrow” is in itself a great selling point. If you add to that the fact that four of those tracks feature the vocal contribution of the band’s original singer Kris Gabehardt whose voice cannot compare to that of Lowe’s but is fairly decent and that the overall sound is quite satisfactory, considering the time that it was recorded, then you know that this is a release worth checking out. Candlemass have always been the band’s main influence, and even though such elements can be found in “It Came Upon the Night”, “Into Battle” and “Where Angels Dare To Tread”, these songs are heavy and up-tempo enough to draw direct comparisons with contemporary US Power Metal bands such as Warrel Dane’s Sanctuary. Traces of the band’s future direction can be found in “Transcending Sentinels”, “Sojourner” and the sole Robert Lowe fronted and truly epic sounding “Mirror Of Sorrow”- those being the true highlights of this release! The rehearsal versions of “Remembrance Of A Life” and “Sojourner” are decent takes though lacking good quality sound and the same applies to the live version of “And Justice For All…” which, for all its flaws, shows that as early as 1988, Solitude Aeturnus were capable of attracting people’s attention with their dynamic style and honest attitude.

Ok, it is a no brainer that any release that consists of demo versions, live tracks and studio rehearsals targets mainly fans that are loyal to the band in question, and “In Times Of Solitude” is definitely not an exception to that rule. What is truly impressive about this release however, and the main reason that will potentially/hopefully attract the interest of a wider audience, is the fact that the material on offer is of really good quality and that the adorning sound is, with minor exceptions, pretty good – something that cannot be said for the vast majority of similarly-minded releases from other bands. Solitude Aeturnus have raised the bar of quality music very high quite early on in their career and, while I still wait for the day that I will hold the band’s next studio album in my hands, I feel slightly comforted by the fact that there is a nine track release available to quench my thirst every time the wait becomes too unbearable. A release certainly worth checking!