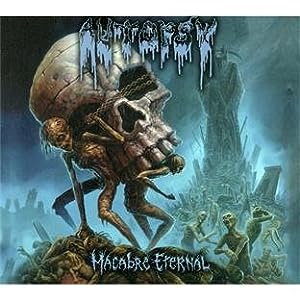 When Californian Death Metal legends Autopsy disbanded back in 1995, following the release of their fourth studio album entitled “Shitfun”, the Metal world lost one of the most honest and purely aggressive bands of the genre. Actually, I don’t really think that Chris Reifert’s (drums/vocals) outfit has ever really received full credit for its contribution to the scene, even though numerous high-profile musicians have openly admitted being influenced by the works of this noisy Concord-based band over the years. Anyway, as I hope you are most probably aware, Reifert and Co finally re-united back in 2008 and last year released a pretty ‘delightful’ five track EP entitled “the Tomb Within”, however many people, myself included, believed that only by releasing a new full-length album will the band finally convince its fan base that they are really ‘back in business’. Well, the long wait is now over as Autopsy are finally ready to present us with their fifth studio album, namely Macabre Eternal”. So, let’s see what’s on offer here.

Autopsy’s music has always been fairly simple in its concept as everything pretty much revolves around the straight-forward ‘mighty riff’: one that is both slow enough to compete with the Doom Metal bands and fast enough to challenge the Thrash Metal outfits! Well, you will be happy to know that two and a half decades later, Autopsy are still capable of bringing together material that combines elements from both these genres, making them appealing to a pretty varied audience. What you are probably most interested in is whether this new album can compete with genre-defining releases such as “Severed Survival” (1989) and “Mental Funeral” (1991) right? Well, “Macabre Eternal” is a really good album, certainly a worthy addition to the band’s back catalogue”, but both sadly and strangely enough, the twelve compositions on offer are not equally balanced across the board. The first half of the album consists of solid head banging material, stuff that old school fans will certainly enjoy, however it is only in its second half that the album flourishes and reaches its true potential as it features truly mind-blowing tracks.

“Hand Of Darkness” is a very fitting song for opening as its rhythmical mid-tempo riff combined with Reifert’s brutal/screaming vocals come across as an invitation from a long lost friend. “Dirty Gore Whore” is based on a similar approach, however I never managed to establish a real connection with it as the melodies and riffs on offer are, by far, the weakest of the album. In “Always About to Die” the tempo becomes really slow and the riffs quite groovy while the same-title “Macabre Eternal” and the follow-up “Deliver Me From Sanity” are more energetic and full of short Slayer-influenced solos, with the vocal section on the second of these reminiscent of those in later-day Darkthrone albums. It is strange that I had to reach half-way through the album in order to be blown away by a composition, namely the rhythmical groovy opus “Seeds Of The Doomed”, but from this point onwards the levels of quality remain fairly high. “Bridge Of Bones” is another groovy track featuring a beautiful acoustic guitar atmospheric passage, “Born Undead” is a Thrash sounding belter and the duet “Sewn Into One”/ “Bludgeoned And Brained” contain riffs of true head banging quality. The song that really stands out for me is the twelve track opus “Sad*st*c Gratification” as I found it main mournful guitar melody, as well as its repetitive Doom riffs and extended final narrative to be truly exquisite – much different from the more straight forward “Spill My Blood” which is assigned the role of closing this album.

Having a band like Autopsy releasing a new album in the year 2011 is in itself a very remarkable achievement, however, it is even more pleasing to discover that these guys are still capable of recording some truly inspirational material. It is true that the quality offerings could have been more evenly distributed across the album, however the thing that they all have in common and that will eventually win you over is that they are all products of a pretty focused and much experienced band that is still passionate about playing Death Metal music. Ladies and gents, there are not many Death Metal bands out there who know what constitutes a proper groovy riff and who feature amongst their ranks one of the best vocalists of the genre… Don’t believe me? Get your hands on “Macabre Eternal” and you soon will!