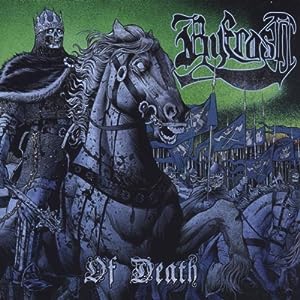 Being a part-time music journalist is a time-consuming task. So, in answer to the question I have often heard: “Why write – why not just enjoy your own choice of music?”, my response is “exposure”. This activity puts me in contact with the work of new and exciting bands – bands like the Bergen based Black/Thrash Metal trio Byfrost, whose second full-length release “Of Death” is now out through the German label AFM Records.

Though hailing from the birthplace of legendary Black Metal outfits such as Burzum, Immortal and Gorgoroth, Byfrost’s approach to Metal is somewhat different in comparison to its Norwegian compatriots. Drawing the inspiration predominantly from the 80s and the works of Sodom and Bathory, the trio do not restrain themselves from cleverly incorporating characteristic elements from the music of their countrymen, creating in the process eight really good quality compositions that most fans of extreme metal, regardless of specific genre affiliations, are bound to enjoy. Actually, if you were to remove HeavyHarm’s quality throaty vocals and the limited parts where drummer Alkolust goes supersonic, the majority of the material on offer could easily come across as the product of a band that has more in common with Sodom than with Mayhem. Great stuff? You bet!

You can tell that this band means real business from the fast-paced opening Thrash theme of “May The Dead Rise” – a three and a half minute Metal assault which will give your neck a real ‘warm up’. The opening theme of “Eye For An Eye” sounds closer to Burzum material than anything, but once introduced to the mid-tempo riff of the main theme, you will realise that Thrash Metal has once again prevailed in this ‘struggle’ for supremacy between the two genres. “Buried Alive” is by far the best composition of the album, being based on an unbelievably catchy head-banging tune and featuring a 80s sounding guitar solo, while the same-titled “Of Death” comes across as a tribute to modern-day Satyricon. The bass guitar tone of “Full Force Rage” is terribly remimiscent of Sodom’s classic “Nuclear Winter” and so moves at an 80s inspired pace while the influence of these German legends becomes even clearer in the four and a half minute “Shadow Of Fear”. While most albums would have made their statement by now, this release features two of its strongest compositions in the very end. “Sorgh” is dark and atmospheric, with discrete keyboard themes and spoken narratives creating a beautiful claustrophobic feeling, while the six minute “All Gods Are Gone” is an Epic piece filled with Bathory-influenced choral parts and eerie guitar harmonies – all trully befitting the band’s northern origins.

Initially, I never expected“Of Death” to appeal to me to the extent that it has done. In strictly musical terms, what these three guys are doing has been attempted by many bands before, however it is the sheer quality of these simple riffs and the passion involved in their creation that will help Byfrost win many important bonus points in their struggle for ever increasing – exposure in the press. Listening to an album like “Of Death” many times is an easy task, with its finely crafted riffs and the opportunity to do a little bit of head banging along the way. A cleverly crafted and highly contageous release that is thoroughly recommended!