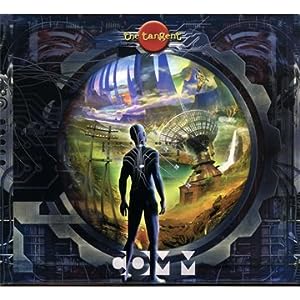 Looking now back at my musical upbringing with the well-trained musical ears of a thirty seven year old, I realise that, even when I was going through the most ‘extreme phase’ of my involvement with Metal music, the band’s that really managed to capture both my attention and imagination were the ones which invested in unusual arrangements and odd time signatures.

It is not at all surprising then that as I am becoming older and, I hope, somewhat wiser, I find myself even more attracted to Progressive music of the Rock or Metal variety. How a band like The Tangent managed to avoid my radar all these years is surprising, especially as no other than Roine Stolt (The Flower Kings) is listed amongst its founding members – a man whose musical career I have been following very closely. I had to wait for “COMM”, the band’s sixth full length release, in order to realise the error of my ways; I was finally introduced to the music of this quintet via the five new compositions on this album.

I began listening to “COMM” with much excitement as I was fully aware that, apart from sporting conventional Rock instruments that we all know and love, the album was the product of a creative process that also acquired the services of Theo Travis’ saxophone and flute.

Well, it did not take too long for me to become really connected with this album, even though my initial reaction was somewhat restrained, as I found Andy Tillison’s lower vocal registers somewhat unusual. Once this obstacle was overcome and I began to really submerge myself in the music, I was overwhelmed, not only by the band’s technical capabilities, which are truly of the highest standards, but also by the way that they incorporate into their lengthy compositions sounds as unpredictable as the noise of a mobile phone searching for signal.

The band’s inspiration and musical references are limitless, ranging from classic 70s Prog all the way to Funk and Jazz – all lending a hand in ensuring that listening to “COMM” is first and foremost a truly enjoyable experience.

There are not many bands that have the guts to position a twenty minute long composition as the opening composition of the album, but this ‘little’ gem is so cleverly crafted and unbelievably confident that, in retrospect, I cannot see any of its peers as better qualified. Starting with a keyboard melody and guitar solo that borrows influences from bands like Transatlantic and Dream Theater respectively, the song soon falls into a groove and funk mood with both the bass guitar and the saxophone providing truly memorable performances.

My initial inhibitions towards Andy Tillison’s vocals are completely forgotten when, towards the end of the song, a narrative that’s clearly influenced by a Pink Floyd “The Wall” is incorporated in the proceedings, thus proving that there is real method in this musical madness! Slightly more unusual in its time signatures and lacking the same number of catchy melodies as its predecessor, “The Mind’s Eye” is far darker and jazzier, allowing the five members of the band to prove their technical capabilities.

In “Shoot Them Down” the members of The Tangent re-discover their emotional side as the slow paced main theme is built upon a soothing bass melody and emotive keyboard themes. Both vocally and lyrically the images that are created are quite atmospheric and when the moment the first guitar solo is performed you once again realise how much indebted this band is to the mighty Pink Floyd in terms of inspiration. “Tech Support Guy” is a more uplifting piece of music thanks to a beautiful flute tune and Jonathan Barrett’s funky bass guitar lines and becomes an even more attractive composition as the Jon Lord-inspired keys become more prominent.

Even though I enjoyed every single composition of the album, the band certainly left the best for last as I cannot even begin to describe how I feel every time I listen to the sixteen and a half minute opus “Titanic Calls Carpathia”! Kicking off with a three and a half intro which is the kind of classical music score that you expect to find in epic movies, the song evolves with a rhythmical mid tempo where the rhythm section operates like a well-oiled funk machine and by the time the simply crafted band-vocal refrain fills the air I feel emotions overwhelming me – a fitting tribute, both musically and lyrically, to such a painful historical event.

Even though I knew nothing of this band prior to “COMM”, I knew that I would be quite interested in this release, especially as band names such as The Flower Kings and Van Der Graaf Generator were mentioned in relation to past releases.

What I could not have known is how addicted I would eventually become to their beautifully crafted and emotionally charged melodies, which are in great supply throughout this fifty seven minute album. The Tangent came pretty close to releasing a top quality album with “COMM” – an album that will very soon find its place in my CD collection. If you love progressive Rock and you are fond of bands that are skilled and strongly resist a genre-defining etiquette then this album is definitely for you! Invest freely and allow yourselves to indulge in this musical journey.