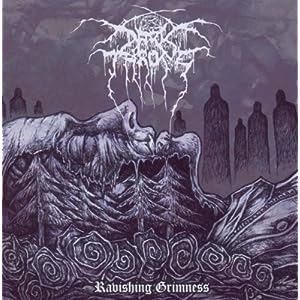 Human beings are, for better or for worse, creatures of habit. Most of us follow a certain routine in our working environment, have a preference as to which side of the road we park our cars and use specific grammatic idioms in our daily language that help us come across as individuals. We pretty much follow a similar approach when it comes to enjoying music: we learn to associate bands with a specific sound, we eventually get to either love or loathe them for it and, in those cases when certain artists choose to follow a musical path that is different from the one we are used to, our reaction is mostly negative. Being quite conscious of that phenomenon, most bands that reach a ceratin level of success begin operating within their own ‘comfort zones’ – others, like the Norwegian Black Metal duet Darkthrone do not allow such considerations to influence their artistic vision, as is proven in their seventh studio album “Ravishing Grimness” which is now reissued by Peaceville Records.

Though starting as a Death Metal outfit, by the time “Transylvanian Hunger” was released in 1994, Darkthrone were alreday spearheading the second wave of Black Metal, strongly associating themselves with hyper fast drum tempos and slow guitar riffs. It was around that time that this unholy duet decided to slow things down and, predominantly influenced by the works of the mighty Celtic Frost, come up wit some of the grooviest heavy-sounding riffs of their career up to that point. One thing that most people failed to realise at the time, and which is once again pretty evident in this nicely made reissue, is that Darkthrone’s decision to ‘clean up’ their sound and reduce the intensity of their drumming did not lead to them sounding less heavy than before. On the contrary, the six compositions on offer contain numerous bombastic riffs that are simple in nature and easily described as ‘head banging friendly’ and, combined with strategically-placed Bathory-sounding lead guitar parts add a beatiful atmospheric dimension to the overal proceedings!

The sound of the whip that was used as an introduction to the five and a half minute opus “Lifeless” is described as a wrong decision by Fenriz in the commentary CD which accompanies this reissue – something I personally quite disagree with! Used in ‘strategic’ parts throughout the composition, it certainly spices up and further enhances the song’s hypnotic Celtic Frost-influenced riffs, helping it stand out as an absolute highlight. “The Beast” is a Punk-sounding composition with a fairly average and repetitive theme that I found really difficult to conect with and, interestingly enough, the only one composition penned by Fenriz. Thankfully, the follow up “The Claws Of Time” brings Darkthrone back in top form, courtesy of the epic-sounding lead guitar melody which embraces its main theme. “Across The Vacuum” is another epic sounding classic based on a massive head banging riff while the band’s admiration for the mighty Bathory becomes ever so evident in the melodic leads of the same-titled seven and a half minute “Ravishing Grimness”. The last compositions of the album, namely “To The Death (Under The King)”, is a delightful piece of music whose strong 80’s sounding Sodom-influenced riffs are impossible to resist.

When first released via Moonfog Productions back in 1999, “Ravishing Grimness” received a lukewarm reaction by Darkthrone’s fan base, but as the years have gone by, people began to finally understand the importance of this album. This six track release is, more than anything else, the first step towards a new direction that will eventally prove that the duet Fenriz/Nocturno Culto are capable of creating good quality and trully memorable head banging tunes – tunes that will eventally be united under the same ‘banner’ by most fans of extreme Metal music. If this beautiful album doesn’t already figure in your CD collection, you should get your hands on it pronto – especially this attractive reissue which, apart from the quite fitting new artwork and liner notes, includes an additional commentary CD featuring both Fenriz and Nocturno Culto and which, at times, is fairly entertaining indeed!

This entry was posted in PURE METAL (All posts), Pure Metal/Album reviews. Bookmark the permalink.