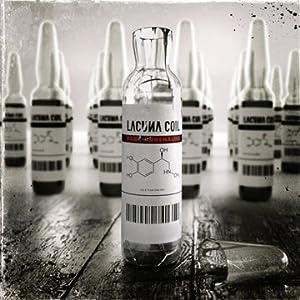 Milan-based Atmospheric/Gothic Metalers Lacuna Coil have managed to capture the attention of fans and music media through a string of highly successful commercial-sounding releases and through a really clever marketing strategy – one that takes full advantage of the fact that the band has in its ranks Cristina Scabbia who is one of the most beautiful looking women in the music industry.

These very reasons, which brought many people closer to the band’s music these last eighteen years, were also the ones that steered me as far away from them as possible – I am not a great fan of the superficial. So, how did I end up preparing a review for the band’s sixth full length release “Dark Adrenaline”, one might rightfully ask?

Believe it or not, something possessed me to actually ask the band’s label Century Media to grant me access to this release and I am truly happy to have done that as this has proven to be a thoroughly enjoyable experience!

Lacuna Coil have been heavily advertised as a Gothic Metal band in the past, a description that is very limiting and misleading, as far as these twelve new compositions on offer are concerned, in any case.

Sure, you could say that both the sound of the low-chorded guitar duet Maus/Migliore and that of Marco Coti Zelati’s keyboards bare some elements and influences of the above-said genre, however the way these short and melody-driven compositions are constructed is not different from that used by any of the modern commercially-sounding Rock bands, such as Coldplay.

With an average duration of three and a half minutes between them, these twelve compositions had to rely on commanding riffs and highly memorable melodies for a successful result and that is exactly what Lacuna Coil have managed to offer us here – and they have done so with flair.

The band’s intentions are clearly audible from the first massive riff which adorns the opening track “Trip The Darkness” – a composition which, not surprisingly, also happens to be the first single for this album.

Having really enjoyed its powerful guitar sound and high vocal register performances I moved onto the equally dynamic “Against You”, a compositions that proves how tight and well-coordinated this sextet really is. The quartet “Kill The Light”, “Give Me Something More”, “Upside Down” and “End Of Time” find the band further indulging in simply-crafted but amazingly memorable hooks and melodies, whereas the massive head banging “I Don’t Believe In Tomorrow” explains why the word ‘metal’ deserves to be included in any sentence describing the band’s sound and style.

It is at this point that I am introduced to “Intoxicated”, a three and a half minute monster of a song which contains the most contagious vocal melody, courtesy of Ms. Scabbia, and which is by far the best composition of the album. Andrea Ferro’s commanding performance in “The Army Inside” proves that Cristina is not the sole talented vocalist in Lacuna Coil while the band’s take on R.E.M’s classic “Losing My Religion” is so clever and insightful that, had its main melody not been so universally recognisable, you would be excused in assuming that this is one of their own.

In the three minute “Fire” you have yet another short and highly memorable composition while the closing five minute epic “My Spirit” enables Cristina to use her full vocal range and is justifiably one of the highlights of the album!

On paper, “Dark Adrenaline” is the kind of album that ought to leave me, at best, totally indifferent, but the quality of the music on offer is such that I would be a fool not to recognise it! The truth of the matter is that these twelve compositions managed to capture my attention from the first spin and it was not long thereafter that I caught myself singing along to some of their highly-infectious tunes.

If “Dark Adrenaline” has managed to have such an effect on someone like me who is generally not fussed by this style of music, imagine what it will do to the fans of the band and those of you who appreciate the genre. Should I be checking out the band’s previous studio releases? Something tells me that the answer to that question is “yes”!