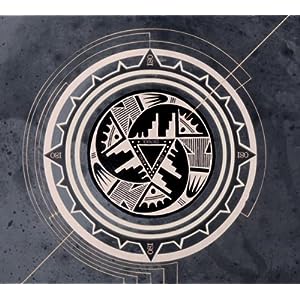 Massachusetts-born guitarist Jim Matheos has been a very busy man lately. It was only a few months ago that his collaboration with ex-band mate and vocalist extraordinaire John Arch resulted in the release of the highly-acclaimed Prog Metal masterpiece “Sympathetic Resonance”, an album which will be supported with a handful of shows this year. Meanwhile, he is already visiting the old continent on a small scale tour with the mighty Prog legends Fates Warning, with whom he is planning on releasing a new album in the immediate future. While all this was taking place, Jim somehow managed to find enough time to start working on some new ideas with long time friend Kevin Moore (Chroma Key, ex-Dream Theater) – ideas that flourished and manifested themselves through a collection of eight songs that are now presented as the fourth studio album of the Progressive/Industrial project OSI, one that comes under the title “Fire Making Thunder”.

When the band’s previous studio effort “Blood” was released back in 2009, Kevin Moore described the end result as having been the product of a ‘positive conflict’ between him and Matheos due to their different musical tastes. That difference in musical taste is clearly audible in the eight new compositions on offer but I cannot think of many examples where a conflict of such nature has ended up being as productive as in this case here. Matheos has spend quite a few years perfecting his style and guitar tone and when the massive riffs that are produced by this man mix with Moore’s cleverly-crafted layers of atmospheric and highly emotional keyboard melodies, the end result is simply magnificent. These songs may indeed come across as easily accessible after only a couple of spins, but it is only when you try to dissect and analyse the layers of different ideas that are incorporated in each and every one of them that you begin to realise how technically adept and compositionally charismatic this duo really is!

This great collaboration between guitars and keys is audible from the first few notes of the opening track “Cold Call”, a song which made me once again realise how much of their atmospheric character Dream Theater have lost following Moore’s departure back in 1994. Matheos is not only a great guitarist but also a very impressive bass player as suggested by the groovy tunes of “Guards”, but his real value shines through the more moody compositions, such as “Indian Summer” – a five minute piece filled with exquisite acoustic guitar and piano melodies. During the five minute instrumental “Enemy Prayer” elements from Fates Warning begin to creep in and when combined with moments of Pink Floyd guitar quality, the end result is simply mind blowing. The band’s undeniable musical pedigree is further showcased through “Wind Won’t Howl”, another emotionally charged piece, and its more diverse follow-up “Big Chief II”, while “For Nothing” is another example of greatness through simplicity. Closing an album with a ten minute track might be quite a risky thing for most bands, but not for OSI who instead made sure that their last musical offering would end up being the most epic of all! “Invisible Men” is a wonderful composition filled with exquisite guitar harmonies, atmospheric keyboard/piano passages and which, once again, owes as much to Pink Floyd as it does to early Dream Theater for inspiration.

Albums that are stylistically varied are by nature more difficult to digest than what you would describe as an average release and are prone to criticism from fans with a, let’s say, more classic musical upbringing. You might assume that “Fire Making Thunder” would be the kind of album that would fall into such a category but it does not and that is clearly due to the technical skill and compositional ingenuity of its creators. I cannot think of many people who can make electronic/industrial themes sound so appealing as Kevin Moore does and there are definitely not many guitarists out there who can create a natural environment for such themes on a Progressive Metal album. “Fire Making Thunder” is a great trip towards uncharted musical landscapes that every fan of good quality music ought to undertake – it really is as simple as that!