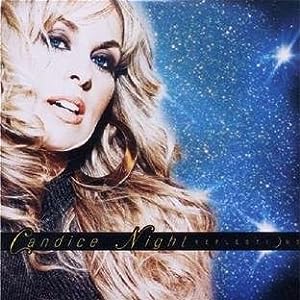 The name “Candice Night” was first heard back in 1995 when she provided guest vocals on Rainbow’s tenth and final studio album “Stranger In Us All”. Though her impact was only really felt on the amazing ballad “Ariel”, Candice managed to make quite an impression on guitar wizard Ritchie Blackmore with whom she soon formed the Folk Rock act Blackmore’s Night – one of the most successful bands of the genre. Now, fifteen whole years after “Shadow Of The Moon” was released, Candice has prepared her first solo effort – a ten track album, entitled “Reflections” and which will find its way onto the shelves of record stores around the world mid-summer.

One would assume that the reason why Candice has opted for a solo release at this point in time would be to explore musical styles outside those of Blackmore’s Night and that is partly the case here. Candice’s vocals are the focal point throughout this ten track album but these songs are divided between those with a more Pop/up-beat tone with a strong commercial feel and the more emotional/moody ones that will most certainly appeal to all Blackmore’s Night fans. What is common throughout the album is Candice’s passion and trademark energy, ensuring enjoyable – if not particularly ground breaking – time spent listening to “Reflections”.

“Wind Is Calling (Hush The Wind)” is a song based on a beautiful harmonic theme and equally colourful vocal melodies that create an interesting contract with the up-beat Pop tunes of the follow up “Gone Gone Gone”; as we said – interesting – but not very exciting. In “Black Roses” Candice plays on a sweet atmospheric theme, an approach that is further followed in “Now And Then”. “Dangerous Smile” is another energetic Pop tune that you may or may not like but I expect most of you to really fall for “For You” – a three and a half minute folk ballad featuring single and multi-layered vocals of the highest quality.

The piano is an integral instrument on both “Call It Love” and “Robin Red Breast” and truly enhances their emotional value, but none can really compete with the ‘gypsy’ folk tunes of “Alone With Fate” – a three and a half minute piece featuring an array of instruments, including the accordion. The closing composition “I Time” is a beautifully arranged orchestral theme which proves that the ‘alliance’ between the violin and Candice’s vocals is truly rewarding.

I cannot think of many albums with which I have managed to connect almost instantly of late, but “Reflections” is definitely one of them. Even though I feel that the material on offer is not innovative, I cannot fail to recognise the passion and energy that permeate this release. Candice Night is a very talented woman with an angelic voice whose solo music should appeal to a varied audience; it may not always be the right time to listen to an album like “Reflections”, but when the proper mood is there and the planets are favourably aligned – then you are in for a treat.