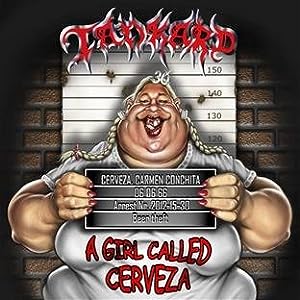 How does a band manage to play the same style of music for thirty years, restricted to a specialised and somewhat controversial topic, and still manage to make a decent career out of it? If there is one band that can really answer such a question that will most certainly be the Frankfurt-based Thrash Metal quartet Tankard whose alcohol-infused riffs and lyrics are the stuff of legend. After sharing a decade with the German Metal label AFM Records, Andreas Geremia and his merry squad decided to ‘jump ship’ and sign a new contract with the commercially-stronger Nuclear Blast and the first product of that collaboration is a ten track album entitled “A Girl Called Cerveza”.

Tankard have enjoyed a good run with their last few releases as both “Thirst” (2008) and “Vo(l)ume 14” were albums that attracted quite high ratings from me and my fellow music journalists around the word. Surely the four Frankfurters would love to provide their new label with a killer album but, sadly, “A Girl Called Cerveza” does not deserve such a characterisation. It only takes a couple of spins to realise that there are certain basic elements that are missing here, starting with the quality of the guitar work on offer. Though the solos are of the highest quality, the majority of its riffs, the backbone of every Tankard album, come across as lacking purpose and inspiration. A similar argument can be made with regards Geremias’ choruses which are fun but not as inviting as they ought to be. There are a couple of instances where the well-tried formula really works, much to my satisfaction, but that only serves to highlight the album’s lack of cohesion and sense of direction.

It’s only when you divide the album in two equal parts that you realise that there is a certain pattern to it. The first part kicks off with the impressive riff-orientated Thrasher entitled “Rapid Fire (A Tyrant’s Elegy)”, continues with an interesting Punk-infused lyrically-hilarious composition entitled “A Girl Called Cerveza” and concludes with the average-sounding Masters Of Farces” and the pretty indifferent “Witch Hunt”/”The Metal Lady Boy” – the latter featuring legendary Metal vixen Doro Pesch on supporting vocals. Similarly, the first track of the second part of the album is the groovy up-tempo belter “Not One Day Dead (But One Day Mad)”, which is followed by the amusingly comic “Son Of A Fridge” and concludes with one interesting piece, “Running Of Fumes”, and the average duet of “Fandom At Random”/”Metal Magnolia”, none of which incorporate any memorable or inspiring themes for the listener.

As I mentioned earlier in my review Tankard have been enjoying quite a healthy run these last few years so a slight mishap is to be expected, especially when the end result is a release such as “A Girl Called Cerveza” – not the worst Thrash Metal album that I can personally think of. Maybe this is the right time for Frankfurt’s finest to slow things down a bit and ensure that they take the right amount of time before they come back with an album worthy of the band’s status and legacy. I only hope that Nuclear Blast will have the patience and offer the support needed for a target like that to be achieved. A pint too many for our German friends here?

This entry was posted in All Posts, PURE METAL (All posts), Pure Metal/Album reviews and tagged A GIRL CALLED CERVEZA, TANKARD. Bookmark the permalink.