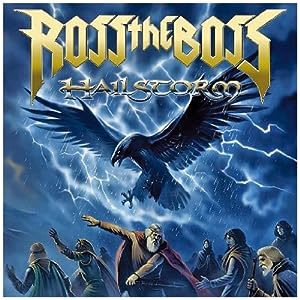 Manowar is one of those bands who can proudly claim to have some of the most loyal friends (and enemies) around the world – a band which, for the last thirty years, has been filling huge arenas worldwide and has been consistently destroying high tech PA systems with both ease and determination. Even the most loyal amongst us, though, will certainly agree that the band’s most classic work was recorded between 1980 and 1989 – the period that featured Ross “The Boss” Friedman as Manowar’s song writer and axeman! Following his departure from Manowar, Ross became involved with various projects, none of which had much in common with Manowar…that was the case till 2008. Now, under the Ross The Boss moniker, the Bronx born-and-bred musician has turned his attention back to Heavy/Power Metal and has just release his second offering entitled “Hailstorm”.

“Hailstorm” was one of those albums that I was both looking forward to listening to and was dreading at the same time! Why? As I mentioned before, I quite adore all Manowar releases up to 1989 and I am one of those people who was always happy to claim that a) it was really Ross The Boss who helped make Manowar who they are and b) that the band has never really managed to get over his departure. Would Ross release an album deserving of his glorious past or try to cash in on it? Would “Hailstorm” be an album worthy of carrying his name in its cover? I was soon to discover, much to both my pleasure and relief, that this is an album that is as much reliant on Ross’s classic past as it is on his vision of modern-sounding Heavy/Power Metal – an album whose eleven compositions are both varied and cleverly arranged. Most importantly, it is an album that will attract the attention of most Manowar fans without venturing too far into the band’s ‘waters’.

Following the short and atmospheric intro “I.A.G”, the listener will come across “Kingdom Arise” – one of the few directly Manowar-influenced compositions whose lead guitar melodies and catchy chorus/refrain help it stand out. In “Dead Man’s Curve”, the best song of the album, in my humble opinion, Ross has created a catchy little gem whose melodies combine the riff prowess of Iron Maiden with the melodic efficiency of Power Metal bands like Gamma Ray. The same-titled “Hailstorm” is an up-tempo riff-orientated piece which creates an interesting contrast when compared with the much slower and by far mellower Hard Rock piece “Burn Alive”. Fans of Manowar and Epic Metal ought to check out both the slow-paced “Crom” as well as the simply riffed “Behold The Kingdom” whose sing along refrain is second to none. “Great Gods Glorious” is a melodic instrumental piece whose classical outlook encourages comparisons with the mighty Savatage whereas the four and a half minute “Shining Path” is based upon classic sounding mid tempo guitar riffs. The two last compositions of the album are both absolute highlights as “Among The Ruins” features an amazingly melodic and catchy chorus/refrain whereas “Empire’s Anthem” combines 80s Manowar riffage with Blind Guardian influenced choral arrangements.

“Hailstorm” is the kind of album that you need to listen to without any expectations and biases in mind! I say that because the impression that I got after I first finished listening to the album was totally different from the one that I hold now. Ross’ intention was not to record the best Manowar album after “Kings Of Metal” – something that would be simply impossible as two very important ingredients (DeMaio and Adams) would undoubtedly be missing! Instead of doing what he opted for was the creation of a varied, straight forward and outwardly enjoyable Heavy/Power Metal album – one which will grow on you with every new spin! The riffs on offer are pretty straight-forward but honest, the solos are short but to the point and the melodies of its choruses and refrains are passionate to the core…is that not what classic Heavy/Power Metal is all about?