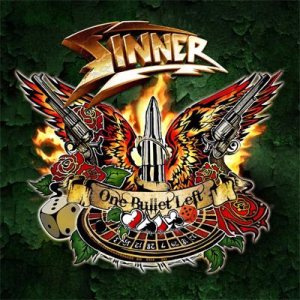 Mat Sinner is a very busy man! Not only does is he heavily involved in the music industry, holding an important position in a well known record company for a number of years, but he is also an active artist whose creative juices are still fairly squeezed under the monikers Primal Fear and Sinner. While Primal Fear are the most popular of the two, mainly as a result of Teutonic Power Metal being fairly popular this past decade, it was through the birth of his namesake Hard Rock outfit that Mat first left his mark back in 1982 and continues to do so to this day. Following a pretty steady career that has seen the band recording moderately-successful studio albums on a fairly frequent basis, Sinner are about to release their seventeenth effort entitled “One Bullet Left” in mid November through AFM Records. Will this new album has what it takes to bring the band to a level of popularity, higher to the one that that its predecessors managed to do?

“One Bullet Left” is a typical Sinner album in a number of different ways. While predominantly an album whose compositions are founded upon catchy Hard Rock melodies, it’s modern sound and, at times, punchy riffs enables Rock and Roll and Heavy Metal elements to ‘creep in’, resulting in the twelve compositions on offer compiling a very interesting mix of different ideas. The main two issues that I can detect with regards “One Bullet Left” are a) Mat’s vocals, which I never really found to be particularly impressive or inspirational, and b) the melodies on offer, the majority of which I have listen to in the past from a variety of different bands, some more popular than the others. What I did find out, however, but only after I had decided to give this album a few good spins, is that these same fairly generic melodies can be moderately enjoyable when on the right mood, making the task of rating it a slightly difficult one.

The first time I listened to the opening track “The One You Left Behind” I was not too impressed by the overall experience, as I found the Blaze Bayley inspired vocals on its main theme to be less than inviting. While I eventually got used to this three and a half minute track, I cannot say the same with regards “Back On Trail” – a very poor attempt to work on a tune that is so dangerously similar to that of Thin Lizzy’s classic “Jailbreak”. The simple Hard Rock melodies of “Give & Take” may not have managed to convert me into a Sinner fan but they did manage to heal a few wounds inflicted by the previously negative experience and by the time the truly catchy refrain of the same-titled “One Bullet Left” filled the room, I was even cracking a wee smile! The unusually titled “10 2 Death” is a fast Rock N ‘Roller with a few catchy hooks which, though a decent track, cannot be compared in both appeal and quality to the 80s sounding ballad “Haunted” – by far the best song of the album. While it is with a party approach in mind that “Atomic Playboys” is crafted, while the slightly slower tempo of “Suicide Mission” and the smart acoustic guitar arrangements in “Wake Me When I Am Sober” make them both more appealing to me. Fans of Accept will undoubtedly enjoy the meaty riffs of “Mind Over Matter” while Thin Lizzy enthusiasts will be compensated for the band’s “Back On Trail” ‘slip up’ with the more inspired “Mend To Be Broken”. Mat has chosen a beautiful melodic ballad entitled “Rolling Away” as the closing theme for the album – a wise choice as it was its quality and charm that convinced me to give this album a proper chance, when my initial instinct was to do otherwise.

Though not the outstanding efforts that perhaps Mat Sinner would have wished it to be, “One Bullet Left” is far from being a bad album. The guitar work on offer, especially with regards the lead solos, is often truly impressive, however, the band does tend to fall into the trap of re-working ideas long associated with a number of different outfits, most of which being fairly popular two decades ago. There are, however, a couple of occasions where these exact same formulae work exceptionally well while managing to make this fairly varied album come across as a pretty cohesive entity. In conclusion, “One Bullet Left” will not appeal to a wide range of people, but those who do not mind heavier elements infiltrating their 80s sounding Hard Rock tunes will most probably warm to it. All the rest ought to approach it with caution and open-mindedness.