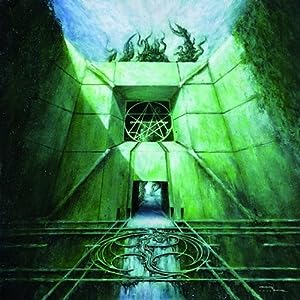 Rock music and the occult are separate concepts whose ‘paths’ first crossed in the late 50s and which have been intertwined ever since. The number of bands at the extreme end of this musical genre who have used the devil and other unworldly creatures as their main source of inspiration are too many to be named in this review, however, what is indeed worth mentioning is that it is only a handful of them which have managed to base their whole career on a concept so unique and so inspirational – one such collective being the Texas-based Black/Thrash Metal outfit Absu. Following the release of their 2009 release “Absu”, the trio, led by mastermind Proscriptor McGovern, began working on the second installment of their Sumerian/Celtic mythologically-inspired trilogy – a collection of six songs, entitled “Abzu”, which will soon be released around the globe.

So far in their career of twenty one years, Absu have released six studio releases with only two being the product of the same line up – 1997’s “The Third Storm of Cythraul” and 2001’s Celtic-inspired opus “Tara”, which also happens to be Absu’s bestselling album to date. Once again, drummer and vocalist extraordinaire Proscriptor McGovern was asked to recruit two new members in the band – quite a demanding task since a certain level of continuity needed to be safeguarded on “Abzu” – the second installment of a long-awaited and much planned musical trilogy. Much to my relief, the six compositions that are “Abzu” are so naturally balanced with those of its predecessor that you are almost led to believe that they are both products of the exact same band. As far as the musical approach is concerned, fans of Blackened Thrash Metal with a soft touch for discrete eerie/atmospheric passages will find here all to their heart’s content!

“Earth Ripper”, the opening compositions of the album, stands out as rhythmically being the most straight forward of the six compositions on offer. Based on a solid galloping riff, this four minute track could easily have been considered a Thrash Metal composition, had it not been for the raw guitar sound and Proscriptor’s trademark Black Metal vocals/screams. The follow-up “Circles Of The Oath” is more typically Absu as, apart from the fact that it kick-starts with blast-beats, its riffing is more varied and it also incorporates numerous beautiful lead guitar harmonies – definitely my favorite song of the album. In “Abraxas Connexus”, Absu provide their audience with a mid-tempo head banger whose short atmospheric parts are both commanding and epic-sounding. If you need any sort of proof as to Proscriptor McGovern’s drumming capabilities, then “Skrying In The Spirit Vision” will answer all your questions while “Ontologically, It Became Time & Space” proves that bombastic riffs and galloping drumming is something that Absu are really good at delivering. The last composition of the album is a fourteen and a half minute epic entitled “Song For Ea”, which is divided in six separate units. This is by far the most challenging composition of the album as its rhythmical patterns change faster that you can spell the name of the band, however, and much to these guys’ credit, the end result comes across as both technically advanced and thoroughly coherent.

Every time a new Absu release finds its way into my record collection, the first thing that comes to mind is how much the Texas outfit has evolved and continues to evolve since its inception. Though not a founding member himself, Proscriptor McGovern has long acquired the role of the undisputed leader, skillfully steering this musical project into uncharted waters and releasing one impressive album after another. “Abzu” is both conceptually and musically the logical continuation of 2009’s “Absu” but, most importantly, is a truly delightful Black/Thrash record that will attract you with its ruthlessness and inspire you with its depth and emotional texture. This is another worthy addition to the band’s sparse but quite impressive discography!