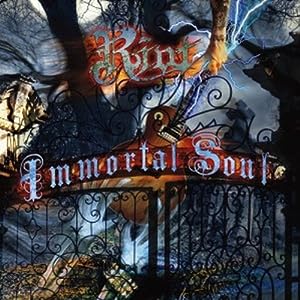 Monastiraki is a beautiful market area at the very foot of the Athenian Acropolis – an area which includes, among others, a great number of second-hand record shops where vinyl connoisseurs can find that which their hearts desire. One record that has escaped me over the years is Riot’s sixth studio album “Thundersteel”, as purchasing a near mint copy, even twenty three years after it first saw the light of day, means that I should have to break the bank. Numerous line up changes in the years following that release ensured that Riot would never again release an album of such high quality and that was the reason why they ‘dropped from my radar’; that is, until I was assigned to write a review for their latest offering, “Immortal Soul”.

Riot has been one of those bands whose musical style owes as much to Hard Rock as it does to classic Heavy Metal – a style that was forged back in the early 80s, at the time when genre restrictions were not something that bands were either aware or particularly preoccupied with. Similarly to bands like Y&T, Riot’s music is filled with simply-crafted heavy guitar riffs and catchy melodies but, as this twelve track release seems to suggest, the most powerful weapon in their musical arsenal is Tony Moore’s wide-range vocals. It is his high pitch vocals together with Mark Reale’s outstanding guitar work throughout the album that will evoke memories of days where bands like Iron Maiden and Helloween were dominating Metal charts around the world (note: Iron Maiden still do, much to their credit) and, even though some of these ideas are far from being original, they are so masterfully put together that you will soon find yourself addicted.

The albums starts in a dynamic fashion with “Still Your Man” – a composition whose early 80s Iron Maiden guitar work combines perfectly with the Michael Kiske era Helloween-sounding refrain. The five minute “Riot” may have a Euro-Power sounding intro but soon evolves into a fast tempo monster that could easily have been recorded by a Thrash Metal band, bar Moore’s high pitch vocal contribution. “Crawling” was the first composition to make a massive impression on me, as I found its dark intro and Kamelot-like oriental theme to be both fairly irresistible and quite different in comparison with the up-tempo Power Metal tunes of the follow-up “Wings Are For Angels” – a song that nevertheless sports a really catchy sing-along refrain. “Sins Of The Father” is a simply crafted little gem with a memorable refrain, whereas “Fall Before Me”, one of the best compositions of the album, works at a far slower tempo and features an array of heavy low-chorded riffs and breathtaking lead vocal harmonies that I find myself singing along to every time.

Following the short intro “Majestica”, the listener hears the same-tiled slow-paced Hard Rocker whose strongest attribute is its catchier- than- catchy sing-along band vocal refrain and that is followed by the up-tempo melodic riffs of the five minute Power Metal anthem “Insanity” – the most commercial sounding of the compositions on offer. One of the songs that will almost certainly cause a lot of controversy is the four and a half minute “Whiskey Man” – the band’s attempt to have fun through humorous lyrics and a riff that sounds terribly reminiscent of Y&T’s classic opus “Maenstreak”. In “Believe”, the second most impressive composition of the album, the band once again proves its great ability to create simple but truly memorable melodies as Tony Moore’s low register vocals sound like those of a young Rob Halford, urging you to sing along at their command. The closing composition of the album, namely “Echoes”, is the most Euro-Power friendly of them, however, it is based on good quality melodic guitar hooks, providing a pleasant ending to the overall proceedings.

Twenty six years of active involvement in the music industry (with a short break in the early 80s) are enough to take their toll on any band, however, far from contemplating retirement, Riot are back with one of the best albums of their entire career! Everything in this album is well calculated and masterfully executed, from production all the way to individual performances, but most importantly, it really sounds to me as if the band had a really good time recording these twelve compositions. Is this the great return that fans of Riot were hoping for? I sure hope so as, based on what I experienced when listening to “Immortal Soul”, I will have no inhibitions in considering myself one of them!