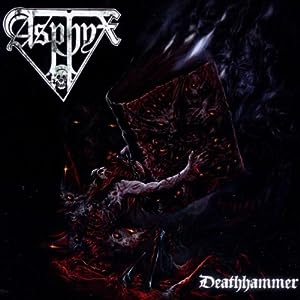 Line-up changes are a common occurrence among bands, but I cannot think of many which can claim to have seen more people coming and going as the Dutch Death Metal legends Asphyx have during these last twenty five years.

What most of the fans of the band and Death Metal enthusiasts in general will agree upon is that Asphyx have been at their absolute strongest only at those times when the vocal duties were handled by ex-Pestilence and, for a very short period Bolt Thrower, frontman Martin van Drunen.

Having enjoyed considerable success with their 2009 opus “Death…The Brutal Way” and the numerous live dates that followed its release, Asphyx are back with a new full-length album entitled “Deathhammer” – a ten track release which will further strengthen their newly-acquired status and position in the ever-so-popular Death Metal scene.

Asphyx were one of the first Death Metal bands to realise that heaviness is not at all compromised by slow paced riffs, providing of course that the riffs can boast a fat, meaty sound, and they managed to acquire a long career for themselves by adhering to this very important principle.

Twenty two years since the release of their legendary full length album “The Rack”, Asphyx are still working on the same musical recipe, combining slow groovy guitar parts with fast riffs of a certain old-school Thrash appeal and, somehow miraculously, managing to make the end result not only appealing to their older fans, but also relevant to the young Metal kids!

With Martin in exquisite vocal form, Asphyx are offering us ten new impressive and somewhat varied compositions which are easy to grasp and quite difficult to resist – the very values that every Death Metal album should adhere to.

Making an immediate impact with a mid tempo Thrash-influenced riff “Into The Timewastes” will soon showcase the band’s diverse nature through a groovy mid-tempo riff that owes as much to Obituary as it does to Bolt Thrower.

The same-titled “Deathhammer” finds the band paying a tribute to early 80s Slayer through a riff that sounds terribly reminiscent of the one found on the all-time classic “Necrophiliac” and together with Martin’s commanding vocals and proud lyrics constitute the first of the many highlights of this album!

“Minefield” is a predominantly slow-paced composition with a somewhat challenging rhythmical structure – much different from the simply-crafted, in-your-face riffs found in “Of Days When Blades Turned Blunt” which is highly recommended to all you head bangers out there!

Another beautiful contrast is created between the Doom-laden riffs of the seven minute “Der Landser” and the up-tempo groovy hooks of both “Reign Of The Brute” and “The Flood” while Martin’s brutal and totally commanding vocals in “We Doom You To Death”, together with the amazing guitar harmonies, courtesy of Mr. Paul Baayens.

By the time the last few notes of “Vespa Crabro” were performed I thought that I had reaped everything that this album had to offer, but little did I know that in “As The Magma Mammoth Rises”, Asphyx had pulled one more ace out of their collective sleeves!

During its eight minute duration the band presents a number of different ideas but its main feature is the Bathory-influenced guitar harmony which still is and will continue to resonate in my mind long after I finish writing this review!

You cannot love Heavy Metal without loving head banging and if you love head banging there is simply no way that you will not end up loving “Deathhammer”!

While most young extreme Metal bands opt for either speed of technical dexterity to impress, Asphyx are, luckily for us, still operating on the assumption that a song’s real worth is in ensuring that simply-crafted heavy riffs and memorable hooks are part of the overall picture.

That is why, while all other albums will gradually fade into obscurity, “Deathhammer”, will provide you with moments of sheer pleasure every time you choose to listen to it. This album can ‘sit’ very comfortably next to classics, such as “The Rack” and “Last One On Earth”, so getting your hands on it – it is simply a no-brainer!