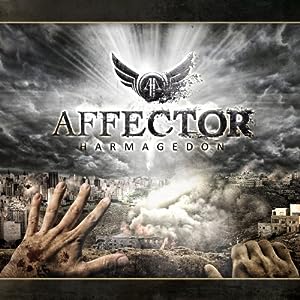 The concept of the “end of days” is one that has been troubling humanity for many centuries and with 2012 being likewise marked in the Mayan calendar I am sure that there are quite a few people around the world who will feel at least slightly uneasy this coming December. But what for some people is a cause for concern for the Prog Metal quartet Affector seems to be a source of inspiration. Back in 2006, this new outfit that features Mike LePond (Symphony X) and Ted Leonard (Enchant, Spock’s Beard) amongst its ranks, decided to start working on their concept debut release and using passages from the Bible and the help of prominent members of the Prog scene and Poland’s Sinfonietta Consonus orchestra, created a beautiful eight track album, entitled “Harmagedon”.

Technical prowess is an attribute that all four members of the band seem to be blessed with in equal terms, and that explains why the average duration of each song is around nine minutes and also why these songs are rhythmically quite challenging. There are also adorned by numerous flamboyant solos (both guitar & key), syncopated riffs and beautiful vocal melodies/harmonies. Technically on a par with Dream Theater (“When Dream And Day Unite” era) and following a melodic band vocal approach reminiscent of the mighty Shadow Gallery, these four lads have managed to create some outrageously technical but, at the same time, quite welcoming themes that ought to satisfy fans of technical and melodic Metal and the participation of keyboard legends such as Derek Sherinian & Jordan Ruddess will undoubtedly bring more welcome attention to this great musical project.

The opening piece “Overture Pt.1: Introduction” is a two minute moody and bombastic soundtrack-like orchestral theme that creates a very welcoming atmospheric feel and the follow up “Overture PT. II: Prologue” allows the band to stretch its technical muscles, indulging in guitar and keyboard themes that would appeal to any Dream Theater fan. More such elements can be found in the eight minute piece “Salvation”, one coloured by Mike LePond’s beautiful bass tunes, while the fourteen minute opus “The Rapture” proves that constant rhythmical variation does not necessarily result in lack of cohesion. “Cry Song” is a much simpler musical proposition compared to its predecessors but offers some beautiful acoustic guitar and vocal melodies while “Falling Away & Rise Of The Beast” finds the band once again looking towards Dream Theater for musical inspiration for numerous solos and technical themes. What “makes” the thirteen minute same-titled track “Harmagedon”, in my humble opinion, are its Queen/Shadow Gallery like band vocals and multilayered guitar solos and together with the more commercial sounding melodic themes of the masterfully crafted “New Jerusalem” constitute the absolute highlights of this album – an album that grows on me with each new spin.

Seven years is a very long time to have to wait for the release of album but I am quite confident that once you listen to the eight compositions on “Harmagedon” you will agree that this is one album that was most certainly worth the wait. With members of Affector being involved in some of the most prestigious and popular bands in Prog Metal, the future of this musical project is perhaps understandably questionable but if the music community realises the real value of “Harmagedon” and offers this band its support then maybe, just maybe, this will be the beginning of the musical journey of one very important Prog Metal band! Fingers crossed!