BURY TOMORROW – “THE UNION OF CROWNS” 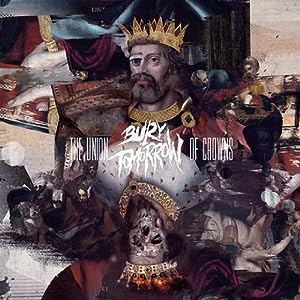 Portsmouth and Southampton have spawned numerous Metalcore outfits over the years, one of which, the melodic quintet Bury Tomorrow, is clearly doing enough to attract the attention of a major label like Nuclear Blast with which they are about to release their second studio album, “The Union Of Crows”.

Before I start dissecting the fourteen compositions on offer I believe that it is only fair to say that Metalcore and I have always ‘enjoyed’ a somewhat turbulent relationship, so for a band of such musical orientation to appeal to me would require some pretty special music indeed. Much as I think that this young quintet has a good understanding of what constitutes a decent riff, investing in melodic passages and catchy choruses, the end result, with minor exceptions, is quite predictable. That means that the younger fans of this popular genre will find a few good reasons to enjoy the material, whereas someone who is neither too keen or devoted to modern day Metalcore will most likely lose interest on this album really fast.

There is no better introduction to this album than the four and a half minute “Redeemer” as it pretty much incorporates all the elements that characterise it: Dark Tranquillity influenced lead melodies, Metalcore repetitive riffs, brutal lead vocals and commercially-orientated clean vocal refrains. “The Maiden” was created to the same recipe, with its follow-up “Lionheart” slightly standing out, thanks to the incorporation of a delightful groovy riff. It is at this point that I began losing interest in the album as I found “Message To A King”, “An Honorable Reign”, “Knight Life” and Royal Blood” to be both predictable and, sadly, quite similar. I am not sure exactly what it is that makes “Bitemarks” stand out, maybe it’s interesting leads, but together with “Abdication Of Power”, they re-ignited my interest – a process that was almost undermined by the pretty average “Kingdom”. Another stand out track is the piano-led emotional power ballad “1603” which is again followed by the boring duet “Sceptres”/”Vacant Throne”. The album’s conclusion is provided through another melodic ballad, namely “A Curse” – a song that proves the pedigree of this band and adds an interesting dimension to the band’s music.

Bury Tomorrow are not a bad band and “The Union Of Crows” is not what one would describe as a bad album – they are just not for me! Though quite skilled, especially in the employment of lead guitar melodies, I found their approach to song writing to be fairly restrictive and predictable and that is not a good attribute for any young band to have. If the purpose behind “The Union Of Crows”, the band’s debut with Nuclear Blast, is to simply help them establish a name through a major Metal label with the next goal being the acquisition of a personal style/sound then all is well here. If, on the other hand, the fourteen compositions on offer are a blueprint of what we should expect from this quintet in future releases then I cannot see them being around for long.