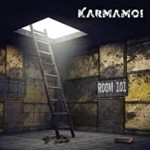 There are times, aren’t there, when you think artists try just that little bit too hard to express feelings of emotion, be it good or bad (Bono is a cause-célèbre here) resulting in an over-egged pudding.

The fifth studio album from Italian proggers Karmamoi is a case in point.

My fellow scribe Pete Whalley described their excellent previous outing ‘The Day Is Done’ as ‘musical interplanetary drift with multi-layered textures washing over you’.

Well you can kiss goodbye to all that here with their take on George Orwell’s dystopian epic, Nineteen Eighty Four.

The novel itself is a doom-laden vision of the future and it is quickly self-evident that Karmamoi’s musical interpretation is not going to let any of the menace and imminent threat escape.

The whole album eats at your inner-self and it is difficult to imagine listening to it more than once without self-harming.

That is not to say it’s a bad album, it isn’t – there’s some tremendous playing from founder members Daniele Giovannoni (keys, drums) and Alex Massari (guitars) topped off with sublime vocals from Sara Rinaldi, who reminded me a lot of Morcheeba songstress Skye Edwards.

The pulsing beat and ominous background voices of opener ‘Memory Holes’ set the tone for what follows with the real menace of ‘Drop By Drop’ and ‘Dark City’ being slightly tempered by the Morcheeba-like vocals and cascading chords of ‘Zealous Man’.

The aforementioned ‘Newspeak’ is the album’s high water mark with outstanding keys from Holzman and great fretwork from Massari.

‘Room 101’ sounds just as you’d expect, with what I would describe as noises from a digital prison and closer ‘The New World’ is so bereft of hope you might well consider hiding the razor blades before listening.

I accept that Nineteen Eighty Four is a tough read and interpreting it musically must have presented huge challenges, but the band’s over-the-top attempts to make it sound as portentous as possible has resulted in a dark, forbidding and frankly, scary album.

Some great playing, but as much fun as a North Korean news bulletin.   **1/2