Blackheart Orchestra are garnering quite a reputation for themselves, especially on the live circuit. So, unfamiliar as I was with them I was keen to catch their short support slot. The Manchester duo treated a pretty full room to a quick run through their back catalogue plus a sneak preview of a brand new track to boot. Refreshingly different, on this brief encounter I will definitely be investigating further.

Lifesigns have been around for eight years now, releasing their first, self titled album in early 2013. The line up has changed since those early days with John Young (keyboards/vocals) the only original member though Jon Poole (bass) joined early as original bass player Nick Beggs was unable to tour.

Dave Bainbridge (guitars/keyboards) came on board in 2017, having guested on second album, ‘Cardington’ while, for Zoltan Csorsz (drums) this was his first live appearance with the band although he had played on latest release, ‘Altitude’.

As they took to the stage for their first set, guitarist Dave Bainbridge pointed out this was their first gig since March 2020, however, you would never have known it as the fourpiece powered their way through a selection of tracks from the first two albums, plus a pre-Lifesigns classic.

If there were any doubts about the bands prog pedigree, majestic opener ‘N’ swiftly lays that to rest.

Special mention for new boy Csorsz on drums who has dovetailed neatly into the band bringing his own unique feel to the older songs like ‘Open Skies’, a John Young Band number from 2003 and 2017’s ‘Different’. Then it was back to the first album for ‘At The End Of The World’ before closing the first half with the pop prog almost hit, ‘Impossible’, complete with backing vocals from the Craufurd Arms choir. 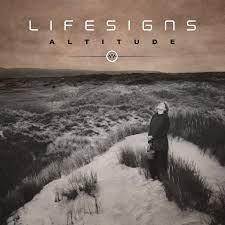 After a short break a slightly apprehensive Young announced the maiden live performance of the Altitude album. Again those concerns were firmly brushed aside as, over the next 50 minutes or so, the six main album tracks were played in sequence.

The title track accounts for a good proportion of that time, shifting dynamically from start to finish, atmospheric soundscapes intertwined with the complex rhythmic gymnastics that allow Csorsz to really show what he’s made of.

The punchy ‘Gregarious’ is next up, Young’s dominant piano motif fading as the sound builds to a glorious crescendo capped out by a superb guitar solo from Bainbridge.

‘Ivory Tower’ a tale of love and jealousy follows, lyrically superb from Young and sung with a real passion. ‘Shoreline’, reminiscent in places of a late era Rush with occasional outbreaks of Steely Dan leads into main set closer, ‘Fortitude’, a slow burner that increases in complexity and power with more gorgeous guitar work from Bainbridge before ending in a glorious keyboard/bass pedal face off.

The encore was the album closer, ‘Last One Home’. Those familiar with Young’s back catalogue will know this as dating originally from the short lived Qango project. Probably the shortest track on offer all night yet. The perfect song to bring proceedings to a close with Dave Bainbridge’s emotive guitar solo bringing the song and the night to an end.

A word here for the excellent front of house sound with much credit to both the venue and fifth band member, the audio magician that is Steve Rispin. Make no mistake, this is ‘Accessible Prog’ for the masses, talking of which it was great to see the venue comfortably full – no chance then of Young buying the audience dinner tonight as he had to do in the early days of his solo career!

Lifesigns are a band that deserves so much more exposure than they currently receive but, with mainstream broadcasters apparently indifferent it is up to those in attendance and the record buying public at large to promote this wonderful band.