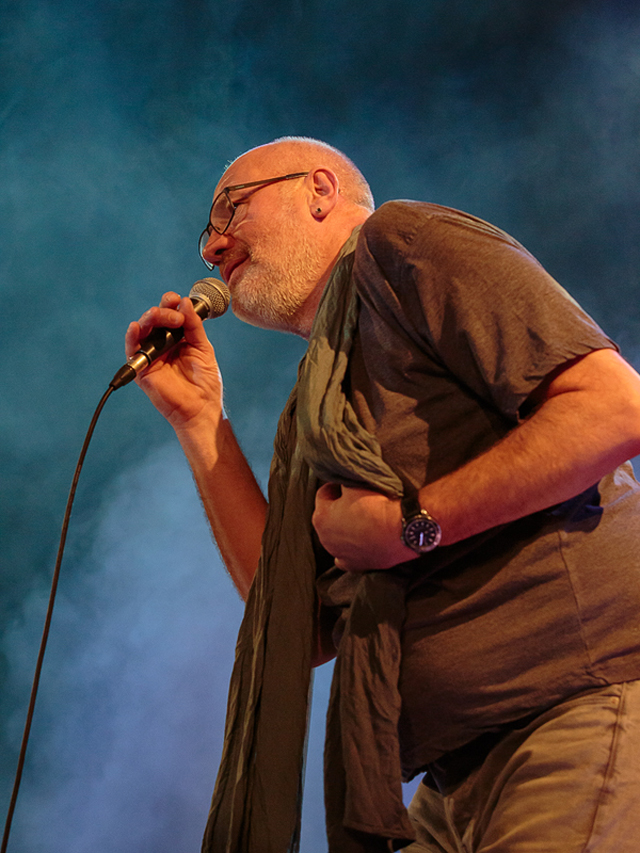 After four decades, four studio albums with Marillion and eleven solo albums it’s drawing close to Fish winding down a long and storied musical career that has seen the towering Scotsman touch the hearts of countless thousands around the globe.

As much a poet as a singer, his lyrics have brought an imagery and honesty that has painted vivid pictures and tapped into raw emotions, putting the listener into the centre of the action, be it walking in other’s shoes or tapping into our darkest, deepest psyche.

With the career best ‘Weltschmerz’ album released last year to critical and public acclaim, a long-awaited tour to properly air the tracks was postponed several times due to the pandemic so when it finally came, the sense of relief and joy was unbridled amongst fans.

Adding to the mix a selection of tracks first solo album ‘Vigil in a Wilderness of Mirrors’ made the prospect even more mouthwatering, this bookending of his time since leaving his former band one that felt perfect for the occasion.

Acting as both support and backing singer to the man himself, Doris Brendel opened the evening with a set that highlighted what a unique and talented artist she is in her own right, her distinctive vocals and the band’s Steam-Punk aesthetic equally attention grabbing.

They started with a bang, kicking off the set with the impressively Led Zep sized ‘Takes One To Know One’, the riffs of Lee Dunham hitting with the same heft and precision of Pagey’s best work, Brendel’s voice a mix of Janis Joplin and a rocky Elkie Brooks.

The shimmering waltz of ‘Never Too Late’ had a filmic and dreamlike quality, the song ending with Dunham winding the spent singer up with a giant prop key and the glorious sweep of ‘You’re Everything’ has elements of Elton John as his most ambitious, the sound a blend of Glam Rock and Soul, the dazzle set to stun.

‘Latest Fantasy’ went from the pastoral to the crunching guitar work heightening the dynamics of the piece, the Brendel seemingly immersed so totally in the song itself that she was transported to another world, the whole audience happily taken with her.

Returning to earth, ‘Why are You Still Here’ put the hammer down once again, it’s jagged heavy rock an adrenaline rush of razor riffs and pounding rhythms, the whole thrilling effect like being strapped to a fairground waltzer as it goes faster and faster.

After that, the Celtic infused ‘Took My Breath Away’ was an atmosphere-soaked change of pace, Dunham’s guitar work and solo superb. The set was rounded off with the interactive drum battle fueled ‘The One’, it’s drama and fun bringing an unexpected sense of community as everyone present got lost in the music as grins got stretched over faces. A highly visual and musically captivating set, Brendel and the band brought their own sparkle to a night that would prove once and for all that Progressive Rock has more soul and humanity than it’s ever given credit for.

Despite a slight technical problem threatening to derail the evening even before he strode onstage, nothing was going to stop Fish make this an event to remember, the set filled with celebratory highs along with some heart-rending moments of pure emotion. Of course, his ability to be able to touch the very heart with his writing has never been in doubt but this was something special, that physical connection between artist and audience that can only be achieved in a live setting, the power tangibly visceral. Opener ‘Grace of God’ was, suitably, like a mainline straight into the veins as it opens with menace and then explodes into something that grows and snakes its way into your brain.

Delving back into ‘Vigil’, it was a welcome return of the brassy ‘Big Wedge’ and the bitingly prescient ‘State of Mind’, the latter dovetailing nicely with the sinewy commentary on police brutality of ‘Man with a Stick’.

Whilst these hit hard, it was a devastating ‘Family Business’ that was most shattering, the shame and anger portrayed in the song almost too much to bear as Brendel’s vocal cries and the solo by John Mitchell added more layers to the poignancy of the lyrics.

The titular ‘Vigil in a Wilderness of Mirrors’ still sounds as fresh as it did, its multiple layers and moods perfect for the live arena. A perfect reminder of just how this transition from the frontman of one of the biggest bands in the country to a solo artist was so perfectly accomplished, the track stands as a show of song writing and arranging strength, Fish throwing everything into it from the whisper to full blooded vocals, the Highland swirl of the drums and the bounce of the chorus.

Whilst the tracks from ‘Vigil’ and ‘Weltschmerz’ are striking when listened to in the comfort of home, the rawness and connection achieved when performed at a show is electric.

The cinematic ‘Rose of Damascus’ is a perfect example of this, the pain and fragility of the lyrical meaning etched into every expression on Fish’s face as he delivers the lines as if the central character’s very life depends on it.

This has always been something the artist has excelled at but it feels particularly striking tonight as the Scotsman opens up a world where an innocent victim is caught in a cauldron of political and religious dogma seemingly void of helping those who need it to be faithful to its tenants.

The drug induced nightmare ‘He Knows You Know’ is a deliriously received trip back to the first Marillion album, greeted like an old friend, its punchy rhythms promoting a mass singalong. The cataclysmic and brooding ‘Weltschmerz’ and the folk infused ‘This Party’s Over’ speak of a life lived, the observation of the minutiae of the psyche drawing us once again in as the rolling bass, swelling keys and jagged

riff flood from the stage. It’s moments like this that make it hard to believe that they’ll be no more albums and only one last tour to come, the singer seemingly having so much more to say and, crucially, having that face-to-face connection with his audience to is the lifeblood between Fish and the faithful.

In that spirit, ‘Cliché’ seems to have more resonance than ever, a love song not just aimed purely at romance but something broader, encapsulating the deep affection existing between the performer and his followers.

Always achingly beautiful, this heightened consciousness added a depth that is woven into the DNA and the solo performed by John Mitchell absolutely stunning, his sublime playing one of the highest peaks of an already monumental evening.

With a triumphant ‘View from the Hill’ closing the set the atmosphere was one of a bittersweetness, the buoyant feel of the music coloured by the knowledge that this, for some present, would be the last time they get to see Fish onstage, barring the happily inevitable encore.

Accompanied purely by keyboards, the gentle and plaintive vocals of ‘A Gentleman’s Excuse Me’ were an intimate start, drawing everyone back into his world before the grand fireworks of ‘Fugazi’, its huge sweep and intensity euphoric.

Another trip offstage before a return for the final climatic run through of ‘The Company’ bringing things to a triumphant head, the sense of being in this together reiterated not just through the lyrics but the bonding together of a roomful of people connected by the music of life.

An untouchable live artist, Fish is able to communicate on a level that few ever achieve and whilst this particular party may soon be over, the memories will always remain. Lives touched and lives changed.