Posted on January 9, 2022 by petefeenstra

Pete Feenstra chatted to Manou and Sebastian from Ivy Gold for Get Ready to ROCK! Radio.  First broadcast 9 January 2022. 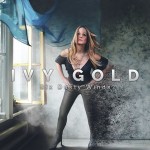 They work hard on their songs and fill their expansive arrangements with plenty of gusto and enough room for spontaneity.

The lineup is completed by keyboard player Anders Olinder who was last seen with Sari Schorr and Glenn Hughes.

The band’s hard rocking style is based round Eder’s soaring guitar work, Olinder’s keyboard noodles and Manou’s wiry vocals, which on the opening cut ‘Face Of Deceit’ and the later ‘Suspicion’ reminds me of Amon Düül II’s Renate Knaup.

The impressive thing about this album is the way that the band grows exponentially over 10 tracks that give everyone room to breathe, stretch out and shape their collective identity.

‘Believe’ for example, bubbles up from a funky groove into a dazzling organ and guitar solo to give the song its defining touches.

‘We Are One’ also draws on a similar funky feel with an animated vocal and a big hair era chanted hook which unfortunately gives it a slightly dated feel.

‘This Is My Time’ is a similar guitar driven funky groove with a notably uplifting anthemic chorus.

The dirge filled title track asks some questions of Manou’s vocals, which she answers favourably when she soars rather than growls.

‘Suspicion’ is a guitar tour de force, opening in a bluesy vein, but then becomes more funkier over a cool organ line. It also marks the point in the musical journey when the project seems to be more relaxed and grooves nicely, especially on the very cool slow fade out.

For the most part, Ivy Gold straddle hard rock bluster, funk and blues, while the slow burning ‘Retribution’ strikes a neat balance between a subtle arrangement, Manou’s hard rock phrasing and a gospel influenced chanted hook which neatly resolves the piece.

Eder again comes into his own with a fluid solo on the melodic radio friendly ‘Shine On’, while ‘Without You’ finds Manou almost over singing on an otherwise laid back track full Eder’s delicate notes, Linder’s cool organ flourishes and Bergman’s subtle shuffle percussive work.

‘Born Again’ rounds things off impressively in hard rocking style, as Eder’s opening guitar burst cuts through a mid-tempo track that borders on the ponderous, but is rescued by the  uplifting lyric: “My soul is rising higher.” The song is finally  transformed by the big chorus and Eder’s defining solo that leaves you wanting more.

There’s plenty of good hard rocking vitality here, making ‘Six Dusty Winds’ a solid enough debut. It’s an album forged by an impressive collective musical ability that is only a few good songs short of a being completely convincing.