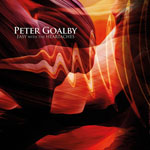 Peter Goalby was the vocalist on a trio of albums released in the 80s by Uriah Heep – Abominog, Head First and Equator. After he left the band in 1986 little was heard from him after guesting on albums from the likes of Shy and John Parr. There was a series of songs recorded in a studio in Wolverhampton with keyboardist Paul Hodson and guitarist Eddy Morton. Robin George also co-wrote three songs and plays guitar on those.

Now, at long last, these songs finally get a proper release on this 11-track album personally overseen by Peter Goalby (from tape transfer, mastering and artwork).

The album starts off with the title track, one awash with guitar riffs and lashings of keys. Takes you right back in time to the 80s melodic hard rock from the likes of Shy, Robin George and Magnum. ‘I Found Real Love’ has a Foreigner feel to it and again plenty of glorious keyboard moments. As does the ballad ‘Take Another Look’, where you do think it is Lou Gramm singing at times.

‘Mona Lisa Smile’ will have Heep fans nodding along, whilst ‘Perfection’ would have given the US melodic rock giants Journey and Foreigner a run for their money. This one damn fine, catchy tune.

Touch of John Parr on ‘I Built This House’, a song which would have been a radio favourite back in the day. Another fantastic song on here and nicely polished to give it that classic 80s melodic rock sound.

All eleven songs feature strong melodies and hooks, any of which could have found their way on rock radio or covered by another artist. Plus of course you have the vocals of Peter Goalby, which really add that extra special something to the songs.

If you loved the Uriah Heep albums Peter Goalby appeared on and/or love 80s melodic rock, this album is a ‘must have’. Of its time certainly, but then good music never loses is appeal and luckily this is one of those ‘lost’ albums that has finally got the full release it deserves. ****1/2