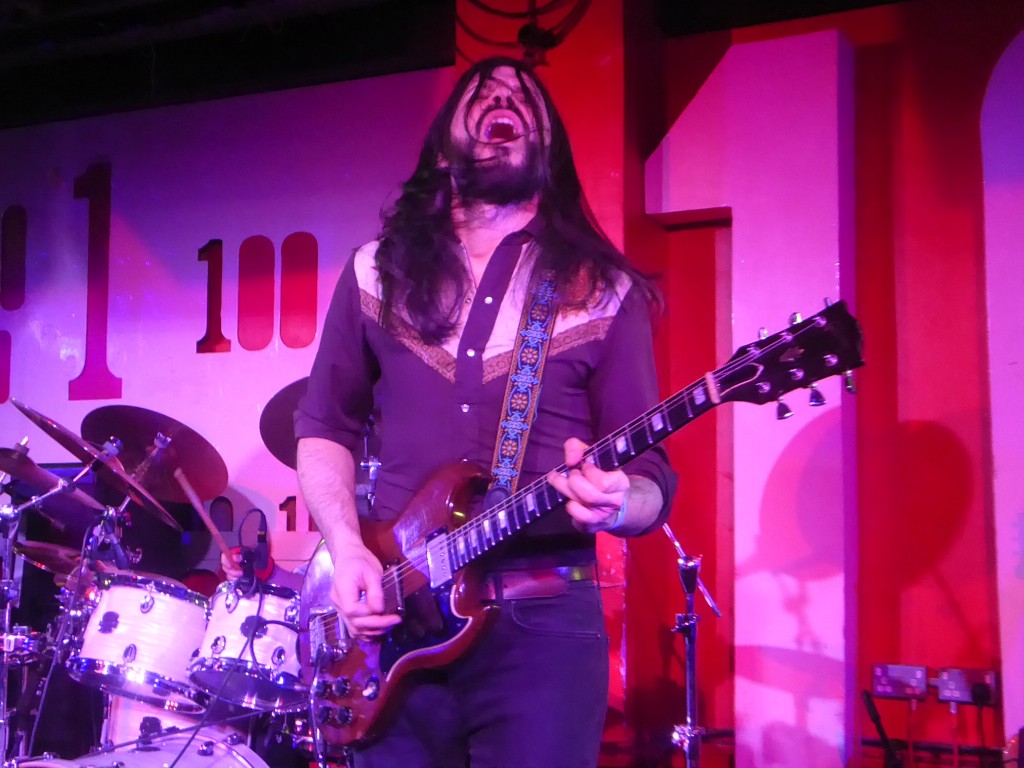 Ten Years After have a considerable pedigree- leading lights in the British blues explosion and participants at Woodstock, as the sixties gave way to the seventies they were a big enough draw at the time to notch four top ten albums and a top ten single. Yet their profile has long been ridiculously low in their home country.

Their name rarely seems to be mentioned either as an influence or a continuing recording outfit and appearances on home soil have been rare as they concerate on overseas markets. As far as I am aware this was their first London appearance since I saw them at the Underworld in 2003, though they have played a couple of festivals. Fortunately they made amends with this show, at one of the few venues to survive from their heyday, as part of the January Blues Festival, thankfully restored after a covid year out.

There was a decent turnout and a very well-received support band, all the way from  Aberdeen in Gerry Jablonksi and the Electric Band. Their distinguishing feature was the instrumental battles between the eponymous guitarist and lead singer and harmonica player Peter Narojczyk that featured on nearly every song including openers ‘Breaking the Stones’ and ‘Heavy Water’. 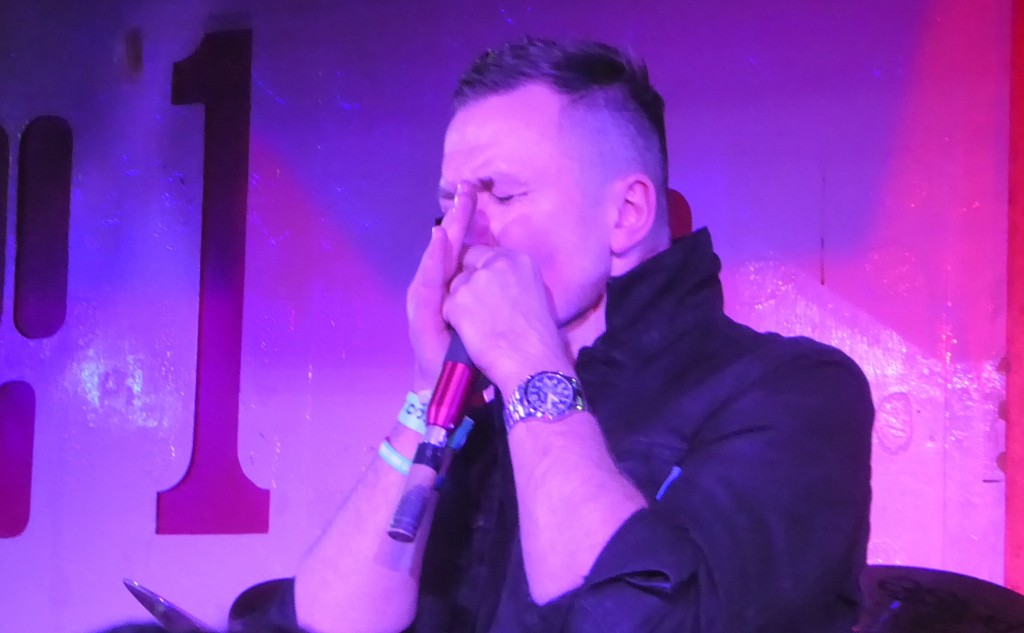 The prominence of the harmonica  – and Peter picked from a selection of a good couple of dozen in their own flight case- is not unusual by itself in the blues but inserted into the band’s raw hard rocking sound, it made for an intriguing combination.

‘Koss’ was a tribute to the legendary Free guitarist with various song titles inserted,  while in a tribute to their late drummer Dave Innes, in a change of pace his successor Lewis Fraser sang the first part of the ballad ‘Anybody’,  and was also called upon for a cover of ‘Little Wing’. Ending with a couple of catchier numbers in the storming ‘Goddamn’ and the slightly poppier feel of ‘Slave to the Rhythm’, I felt thoroughly glad I’d made the effort to arrive early and catch an enjoyable and entertaining set. 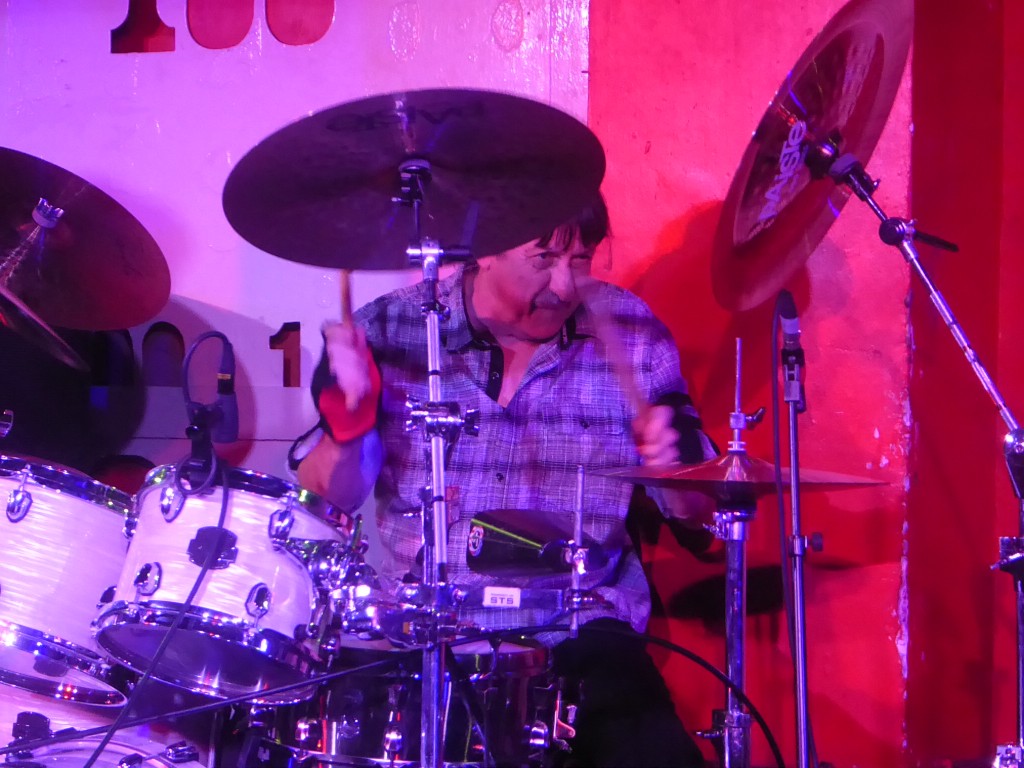 Ten Years After still boast two members of their original quartet in drummer Ric Lee and keyboardist Chick Churchill, both now 76, but this was my first sighting of Marcus Bonfanti, the ‘new boy’ though it is actually eight years since he followed Joe Gooch in inheriting mantle of succeeding late guitarist and singer Alvin Lee. That would be an unenviable task for anyone, but with a strong voice and a magnetic, hirsute stage presence, he rose comfortably to the challenge.

On the opener ‘Land of the Vandals’ his guitar and Chick’s keyboards combined to produce a memorable instrumental hook underpinning a straight ahead rocker, though it wasn’t immediately recognisable to me and I subsequently discovered it was drawn from their 2017 ‘Sting in the Tale’ album, another indicator of that low profile in this country. 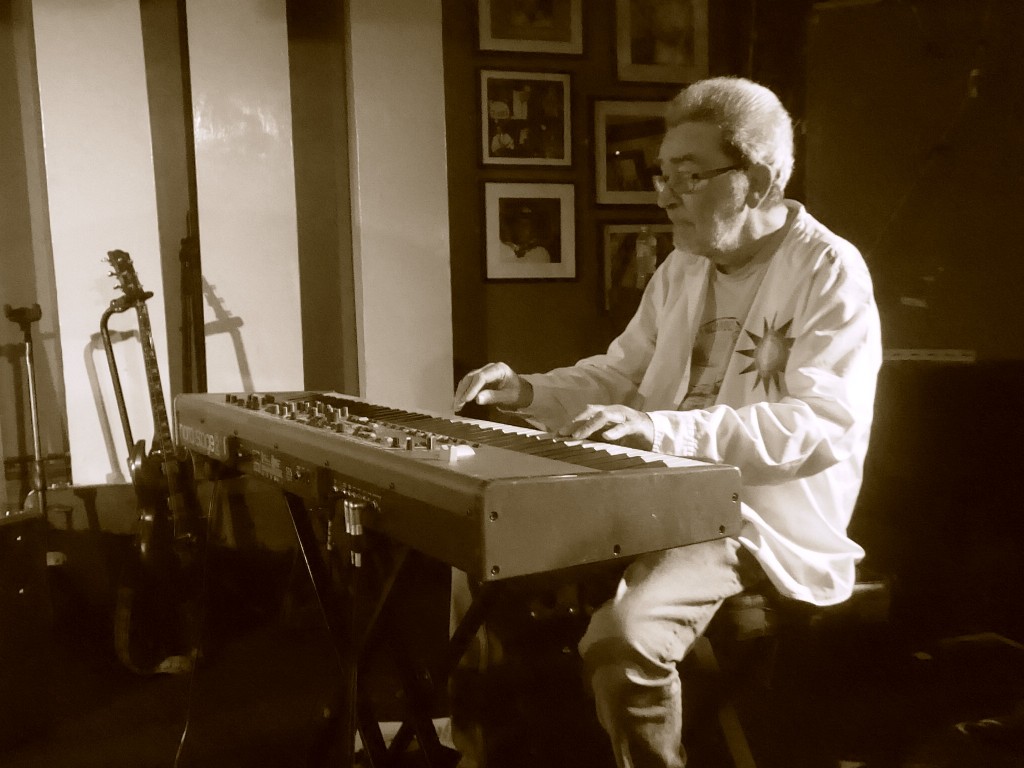 ‘One of These Days’ was much more reassuringly TYA in style in its bluesy jamming with Marcus even playing harmonica, before a rapturous cheer greeted the hypnotic riff of  ‘Hear Me Calling’ (the first TYA song I ever heard, albeit in the shape of Slade’s cover). A solo on his mimimalist looking Nord keyboard proved that Chick retained his old playing magic, all the more reassuring as he had come on stage a worryingly frail figure who at one point seemed overwhelmed by his surroundings.

‘I’d Love to Change the World’ was memorable, mixing those folky passages- and lyrics that somehow seem even more relevant today-  with Marcus exploding into a guitar solo of stunning speed and fluency. ‘Silver Spoon Lady’ (another from ‘Sting in the Tale’) was more straight ahead but enjoyable boogie, before they used up another one of their signature songs relatively early in the set in ‘Love Like a Man’ with that huge, slow riff. The middle section saw Marcus jamming with former Jethro Tull member Jonathan Noyce, standing in for usual bassist Colin Hodgkinson who had injured himself. Considering the TYA sound rests a lot on lengthy and spontaneous jams,  he acquitted himself admirably. 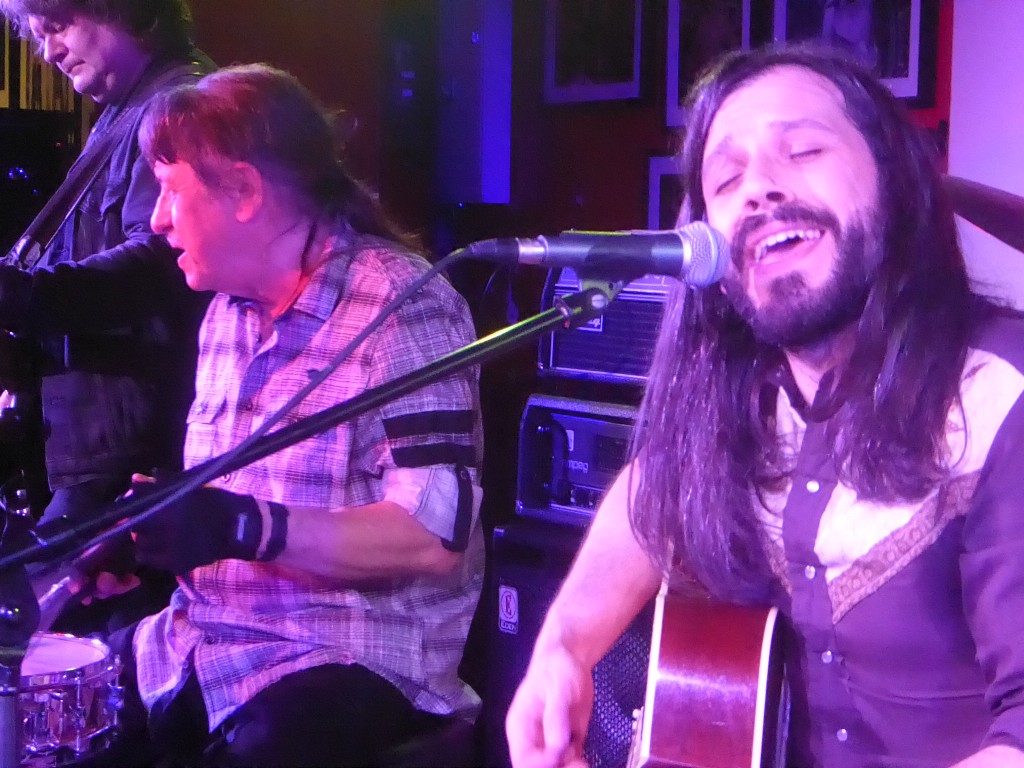 In a surprise change of pace Ric came to the front of the stage to fondly tell some stories of the band and Alvin Lee’s earlier days and play percussion on a mini acoustic set of songs from those years, beginning with the whimsical, almost psychedelic ‘Portable People’ before the more traditional bluesy stomps of Bill Broonzy’s ‘Don’t Want You Woman’ and ‘Losing the Dogs’.

Having got that out of their system,  the rest of the set featured those lengthy souped up jams, often of old blues numbers, that characterise the band. My enjoyment of ‘Spoonful ‘ was slightly dulled by over-familiarity with Cream’s version then ‘Good Morning Little Schoolgirl’ (which surely would be ‘cancelled’ these days) featured more great jamming between Marcus and Jonathan. 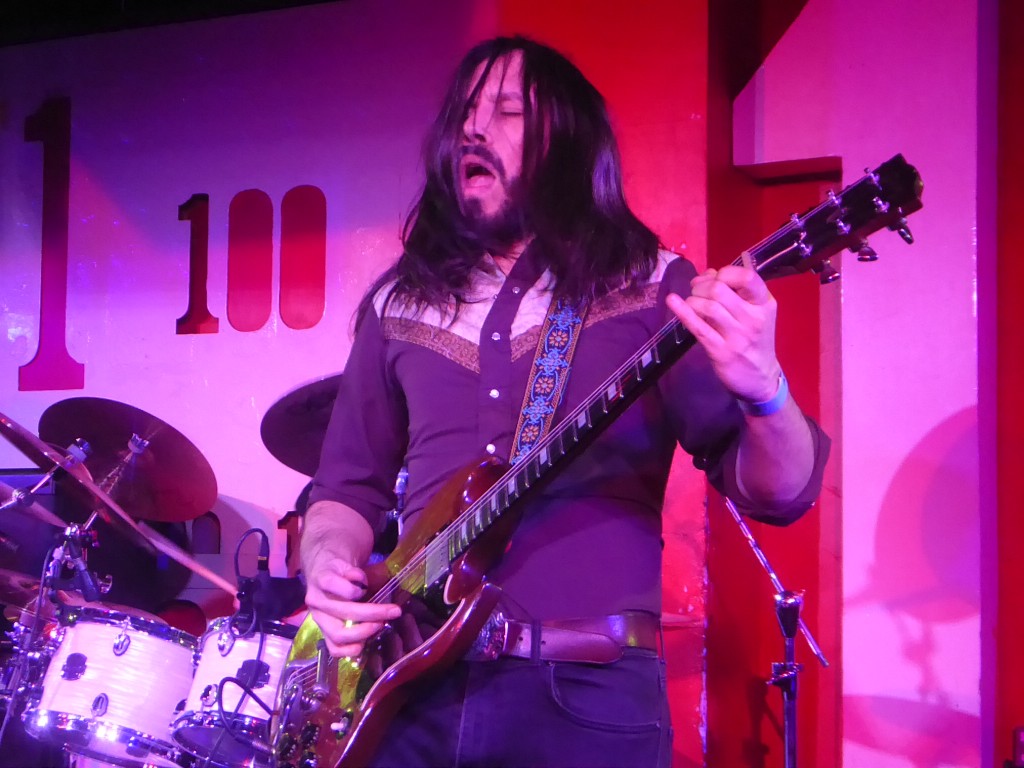 ‘I Just Can’t Keep From Crying’ was transformed as it progressed from a slow ballad by another highly impressive solo from Marcus of great speed combined with feel, before he did likewise on ‘I’m Going Home’,  delivered in their signature style, with Ric’s drumming giving it an almost jazzy swing and the band improvising and slipping in a rock n roll medley.

Discretion was the better part of valour as rather than return to the dressing rooms and back for an encore, they stayed put to take the applause before seeing out the night with ‘Choo Choo Mama’,  a relatively more concise slice of boogie with some great honky tonk playing by Chick. 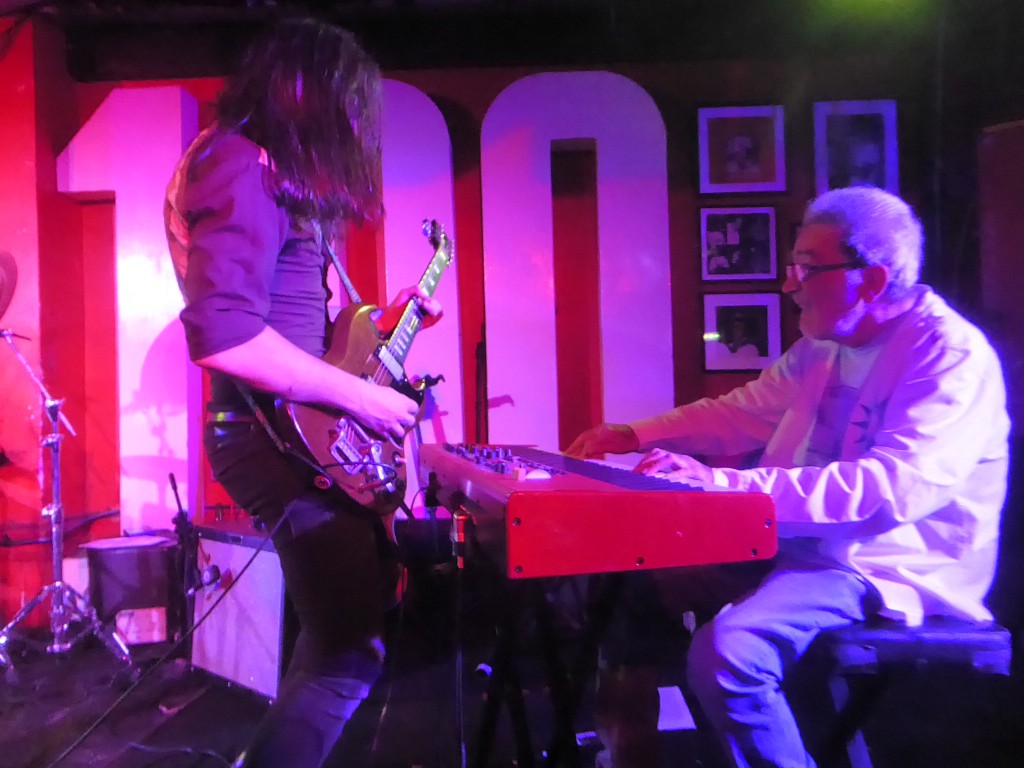 I’d been looking forward to this gig simply because it had been so long, and with a sense of curiosity, and yet the performance was even better than I had dared expect. The passage of time is not on their side, but the blend of old and new faces has breathed fresh life into a band ripe for a long overdue revival in their home country.