Book review: DONT WORRY ‘BOUT THE BEAR (From the Blues to Jazz, Rock & Roll and Black Sabbath) by Jim Simpson with Ron Simpson

Share the post "Book review: DONT WORRY ‘BOUT THE BEAR (From the Blues to Jazz, Rock & Roll and Black Sabbath) by Jim Simpson with Ron Simpson" 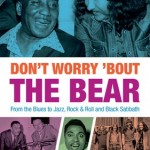 Jim Simpson’s ‘Don’t Worry ‘Bout The Bear’ – the title comes from a Doctor Ross song written for the author– is a down to earth account of his 60 plus years in the music business, as a musician, bandleader, promoter, record producer, festival director, manager, journalist, publisher and photographer etc.

It’s a musical biography that encourages the reader to share his passion and joie de vivre.

There’s little room for the sensational or scurrilous, though he does recount occasional tales of the road in a sanguine manner, while he shrugs off and music biz shenanigans in his own considered way.

He’s clearly passionate about jazz – playing, promoting, recording and writing about it – and has enough interested in blues and rock to invest his time and energy in an array of bands and albums.

Apart from the Marbella Jazz Festival and European tours, it’s mainly a Birmingham centric book, Britain’s second city being in his view: “The UK Capital of Rock and Roll.”

It’s a contention that seeps into a dry narrative style, big on detail and sometimes delivered in a droll if not ironic style. ‘Don’t Worry ‘Bout The Bear’ isn’t so much a coffee table book – though the many excellent photos might suggest otherwise – but more of a reference book, in which the subtitle, “From The Blues To Jazz, Rock & Roll and Black Sabbath” provides the infrastructure for Simpson’s hands-on experiences.

Refreshingly the focus is primarily on music, while any business skulduggery is seen as an affront to his own musical mission.

A trumpeter himself, Jim is primarily interested in jazz, whether it’s meeting a number of his heroes, or rejoicing in the abilities of lesser known players.

He takes us on a music filled journey incorporating his National Service days in the RAF in Gibraltar, where he broadcasts and writes about jazz.

His photographic skills are honed in the streets of Skegness, while the nearby seaside town near Ingoldmells is where first meets Humphrey Lyttelton, who much later becomes the patron of his Birmingham International Jazz festival.

He forms his own Kansas City style swing band and quickly became adept at organising residencies and other gigs that include international blues names like Jesse Fuller, Buddy Guy and Champion Jack Dupree.

Fired by the arrival of the Beat Boom, he proudly notes: “In 1964 the Midland Beat paper estimated that there were over 500 groups in the city.”  He ends up managing a jazz into r&b and soul band.  They change their name to Locomotive, enjoy a ska hit, but have Proggy pretensions.

In championing the band with a Xmas single he effectively starts Big Bear Records, which goes on to be the UK’s longest independent label.

An involvement with Bakerloo blues band leads to him establishing Henry’s Blues House in 1968, which Melody Maker calls: “the first and best progressive music club outside of London.”

It’s worth pondering the quote, because just as Jim was about to branch into yet another role as an agent, hosting an array of top American blues artists, at no point in this book does he appear to be constrained by style, fashion or even a lack of commercial potential.

He even manages to get the very eclectic Tea & Symphony signed to Harvest records.

And by the time of the “From Earth To Black Sabbath” chapter, he’s on a mission to fight Sabbath’s corner against a London based apathetic music press.

“I didn’t expect everyone to enjoy the music, but the quality was undeniable, the presence and the power impossible to ignore.”

Being the music biz, of course he gets shafted, though he says Don Arden: “always without exception, treated me fairly, even generously.”

He blues artists tours are illustrated by some outstanding photos. Ditto his jazz gigs. He also becomes an essential champion of home grown talent such as Val Wiseman (vocalist with ‘Lady Sings The Blues’ and later his partner) and the King Pleasure & The Biscuit Boys swing band.

It’s roundabout the half way point in the book that he drops a barely disguised bomb shell, by admitting that the well sponsored 1990 Miles Davis appearance at the Birmingham NEC – the biggest jazz event the city’s history – is a financial flop, leading to it being reconfigured as a free festival in the future.

There are also some wry reflections on his stewardship of the troubled Birmingham’s Ronnie Scott club franchise, and the later Marbella Jazz Festival, but it’s countered by happier memories at his Birmingham equivalent.

If there’s a downside to the book, it’s in the narrative pacing, which is partly due to a paying too little attention to the changing musical environment. At times it feels as if he’s in a bubble of his own making, but maybe that’s a direct reflection of a true independent spirit in search of new challenge.

The bonus is that there’s a full discography and a proper index. Then again you’d expect nothing less from a true fan. ****

Share the post "Book review: DONT WORRY ‘BOUT THE BEAR (From the Blues to Jazz, Rock & Roll and Black Sabbath) by Jim Simpson with Ron Simpson"