Posted on February 4, 2022 by andynathan 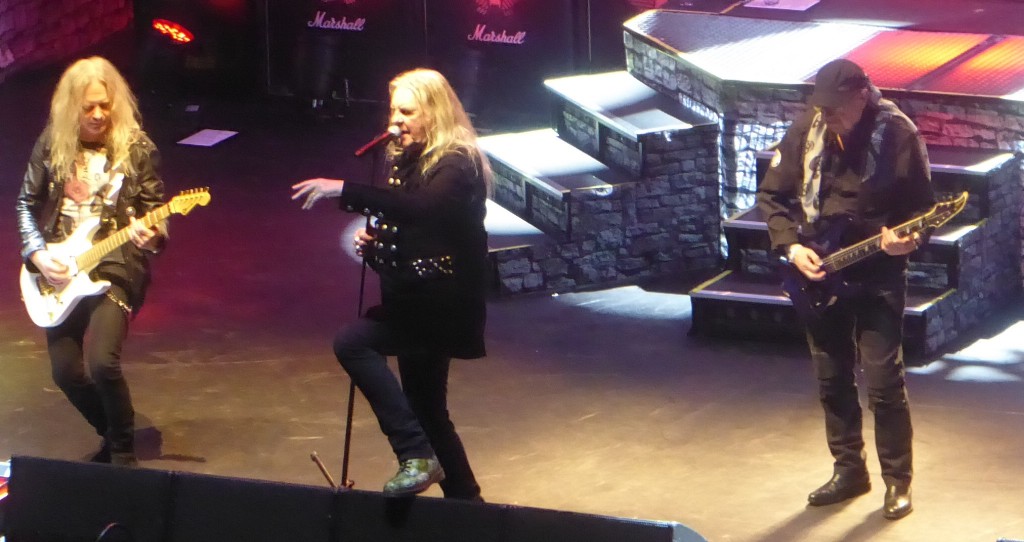 Saxon’s 40th anniversary show was a case of deferred pleasure even by current standards. It was actually first scheduled as long ago as October 2019 but delayed when singer Biff Byford underwent heart surgery, and subsequently rescheduled at least twice more, I lose count.

As Omicron spread you would have got short odds on a further cancellation, and indeed of the trio of shows Glasgow fell victim, so when the day finally arrived it almost seemed too good to be true, and added to the atmosphere of anticipation.  We should count our blessings as these events are still not possible in most of Europe right now, and it certainly felt like the biggest show since the pandemic with seemingly the whole of London’s rock and metal scene, fans, journos and musicians alike, out in force.

Despite the constant rescheduling, the sold out sign was hung outside what was always known as the Hammy Odeon in the days when Saxon were regular headliners here. The last time was in 1990 but this was the final proof how they have worked their way back to popularity on the strength of delivering live every time. 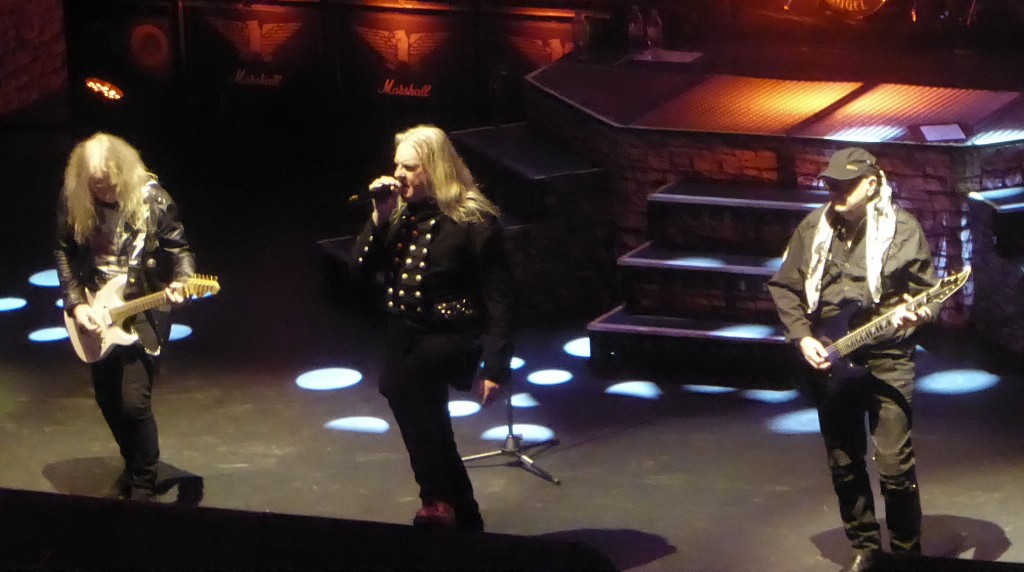 The sense of occasion was added to with a very strong supporting cast and indeed an opening time of 5pm reflected the fact this was almost a hybrid of mini festival and headline show.

The first two acts were very much Saxon’s contemporaries in the New Wave of British Heavy Metal (NWOBHM) movement so indelibly associated with them, though Diamond Head have long been down to one original member in guitarist Brian Tatler. They had an unenviable task going on so early, and with much of the stage cordoned off, and a couple of unmemorable more recent numbers made for a slow start. 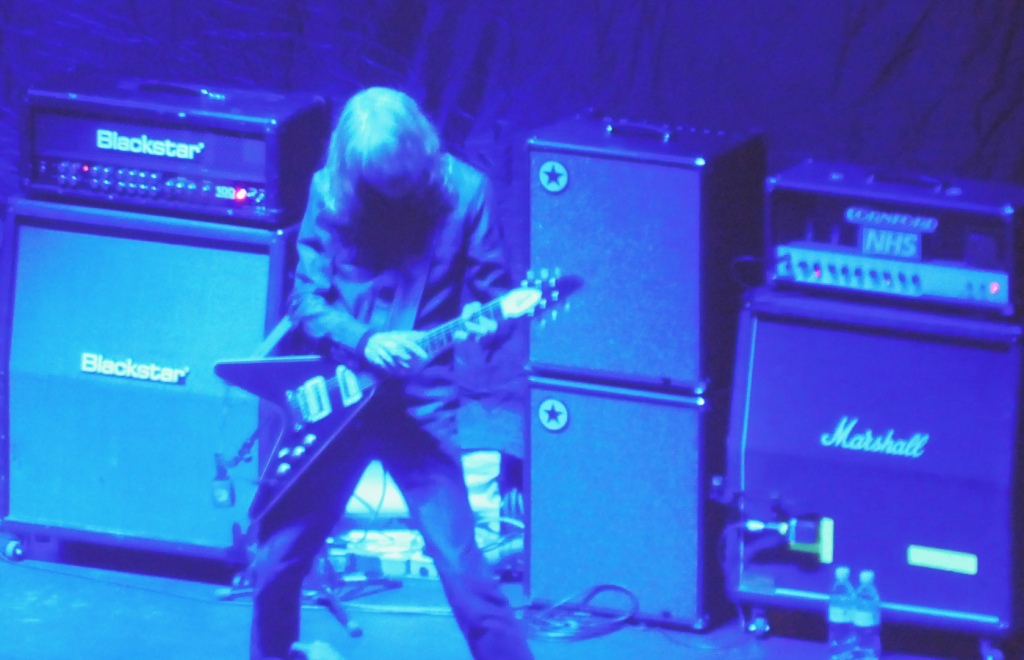 The set then drew heavily- in the form of ‘Lightning to the Nations’, ‘Sweet and Innocent’ and ‘Helpless’ – on their debut which has also celebrated its 40th anniversary since the gig was originally planned, rather than the more polished material off the subsequent pair of major label albums. Current singer Rasmus Andersen has a strong voice but the nuances of Sean Harris’ original delivery were missed.

Finally the set came good with the epic ‘Am I Evil’, with that dark riff and thrilling high-speed solo of Brian’s, that so inspired the young Metallica, in turn reviving Diamond Head’s own career. It induced a bit of a ruck downstairs and even the odd headbang in the balcony. I suspect we will see better of them when they are the sole support on Saxon’s winter tour.

Girlschool were another familiar face, with a long history of touring with Saxon, particularly with old buddies Motorhead.  Again they were rather limited by the wide and shallow stage set up with capable guitarist Jackie Chambers seemingly in a different postcode and they let slip some early frustrations with the sound. My own last sighting of them was in 2008, supporting Dio,  but reassuringly they have not really changed in 40 years right down to frontwoman Kim McAuliffe shouting her ‘cheers you lot’ catchphrase in that broad South London accent. 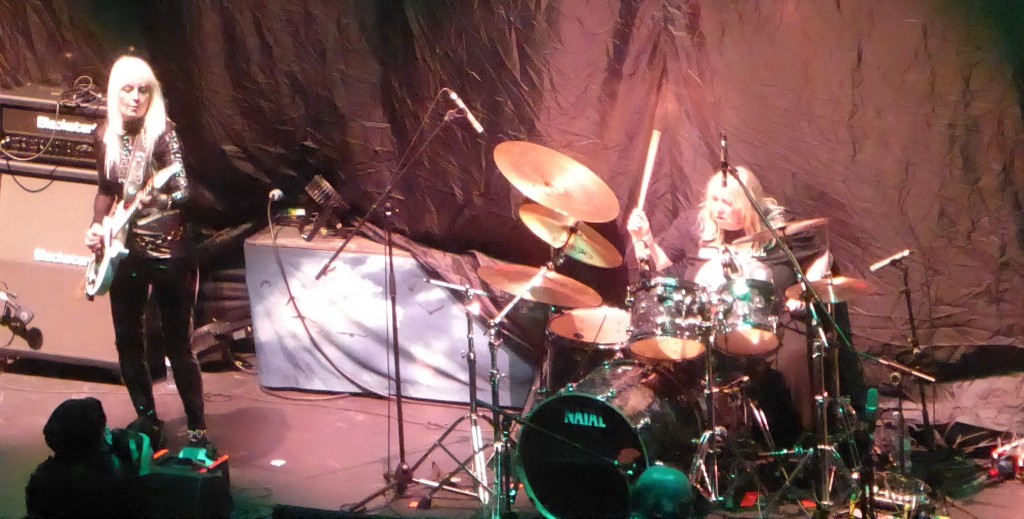 Other than slipping in a solitary song from their most recent album ‘Guilty as Sin’ in the title track,  they fairly tore through a set of old favourites from their first two albums- including ‘Demolition Boys’,  ‘C’Mon Lets Go’, and ‘Future Flash’, followed by ‘Nothing to Lose’ with a crowd singalong and my own favourite ‘Race With the Devil’. Indeed after a tribute to Motorhead their own cover of ‘Bomber’ and a closer of ‘Emergency’ brought back further memories of the days when there was such a kinship and musical crossover between the two bands, and I enjoyed their set far more than I was expecting to.

There was probably a shortage of home grown options to replace Krokus from the original bill,  but a few weeks before Uriah Heep were announced in the special guests slot, which also came with a full band backdrop and stage set and improved lighting compared to the two openers. However, being associated with an earlier golden age of rock they were not as natural bedfellows on the bill. 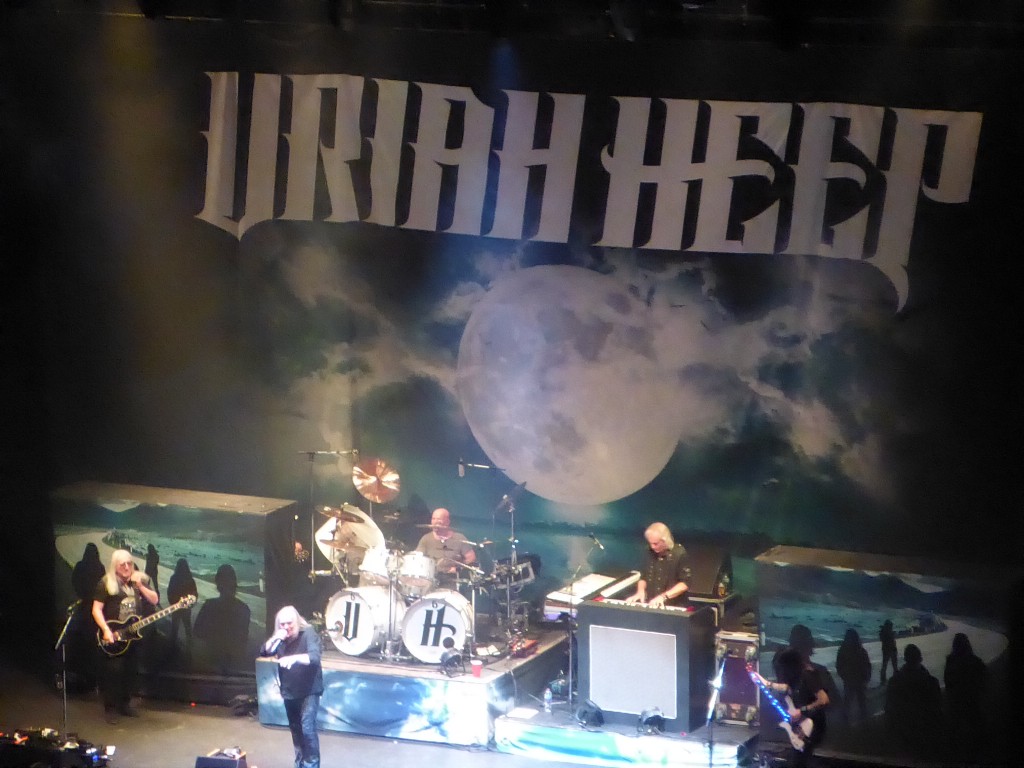 The set travelled backwards in time, opening with a solitary number from their most recent ‘Living the Dream’ album in ‘Grazed by Heaven’ before a storming ‘Too Scared to Run’ which would have been their new song when they appeared together with Saxon at Donington in 1982.

The rest of the set was taken from their early seventies commercial peak. Yet anyone expecting a bunch of dated old farts would have been shocked that this version of Heep is perhaps the heaviest in their 50 plus year career with the younger rhythm section of Dave Rimmer and Russell Gilbrook supplying fresh power. 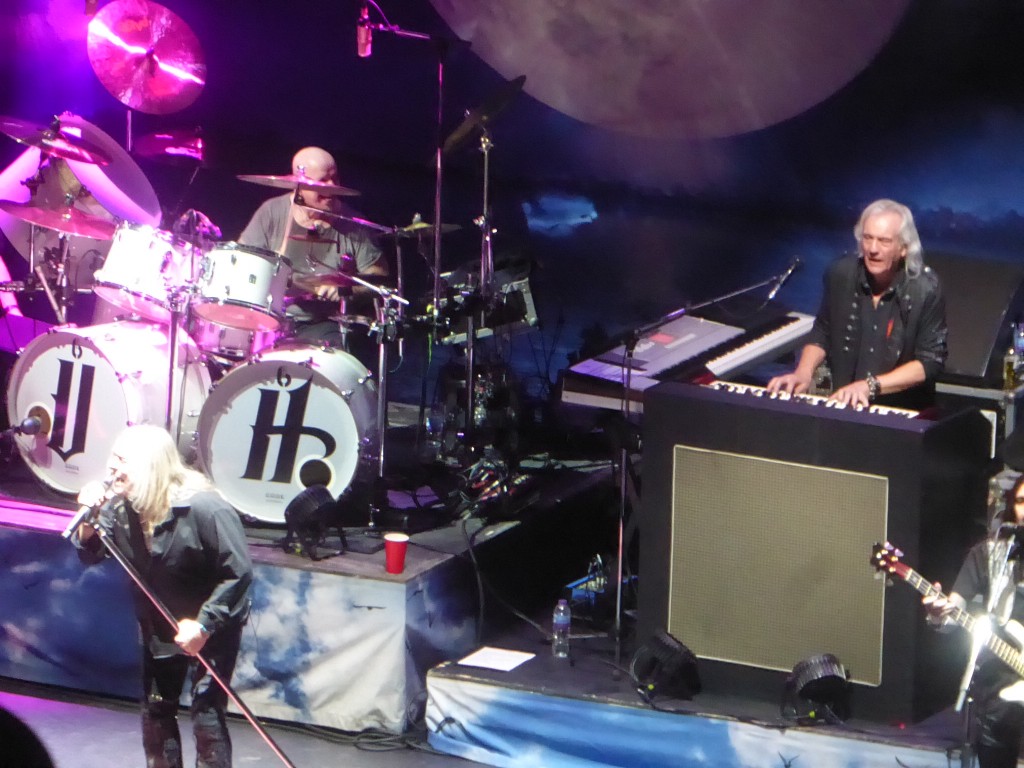 ‘Gypsy’ showcased the band trademarks of heavy Hammond organ playing from Phil Lanzon and founder member Mick Box’s wah-wah guitar, then a rollicking ‘Look at Yourself’ segued into an instrumental jam in which every band member showed off their prowess. They did likewise on the epic ‘July Morning’ which flew by before a couple of slightly shorter favourites in ‘Sunrise’ and the perennial ‘Easy Livin’.

Though I’d seen pretty much this set at Stonedead Festival last year, it was still highly impressive and I sensed they relished a rare opportunity to play a larger venue than usual and win over some new fans. 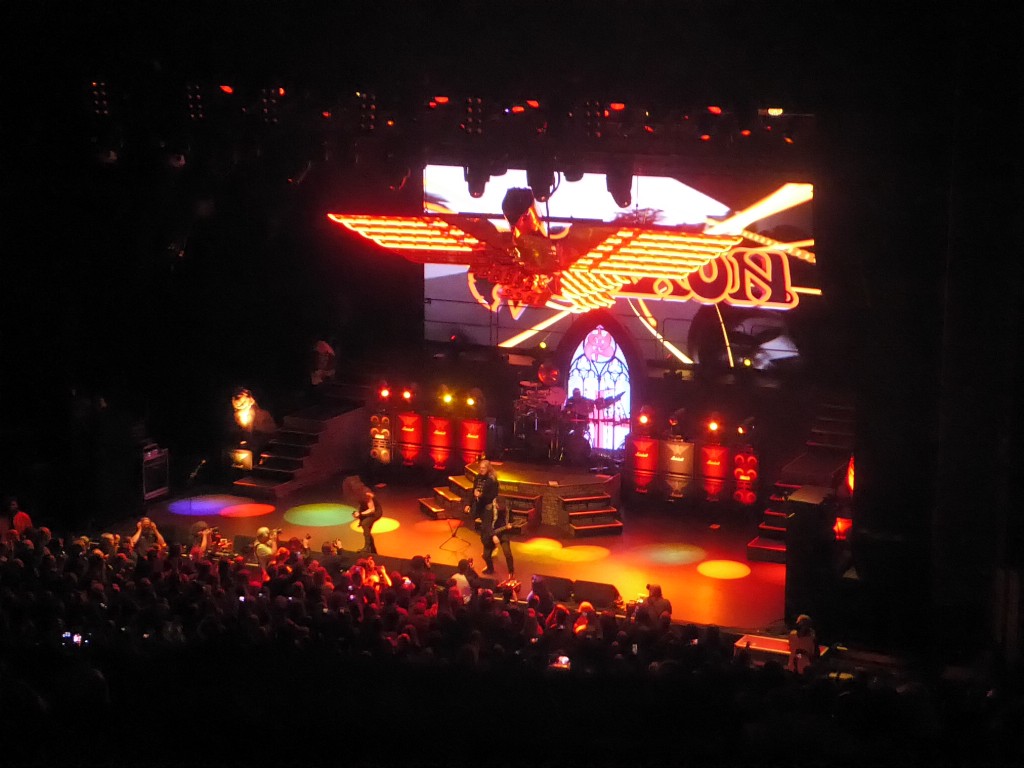 After an introductory montage of old photos and press cuttings the curtain fell to reveal an even more elaborate stage arrangement for Saxon, with the giant Eagle looming over the stage and a stage set resembling a castle with a stained glass window sporting their the ‘S’ logo behind Nigel Glockler’s drumkit.

They opened with a pair of faster numbers old and more recent in ‘Motorcycle Man’ and ‘Battering Ram’ before I was shocked to hear one of their NWOBHM-defining classics so early in the set in ‘Wheels of Steel’, complete with obligatory sing along and getting a few people in the circle fist punching from their seats. 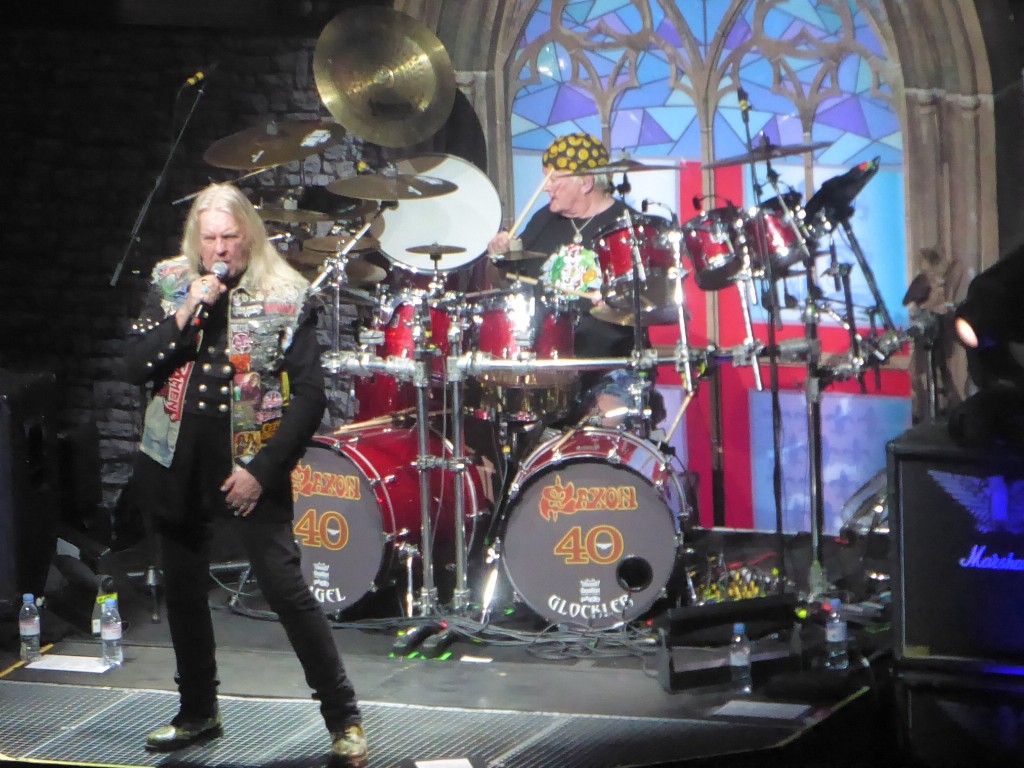 Traditionally a Saxon show focuses on more recent product in the first half of the set before moving on to such tried and tested crowd pleasers. However after their musical and lyrical tribute to Mororhead in ‘They Played Rock n Roll’  came two of the latter in ‘Strong Arm of the Law’ and ‘Denim and Leather’, the guitars of Paul Quinn and Doug Scarratt intertwining perfectly. Not half an hour in, the Ferrero Rocher ‘ambassadors’ advert came to mind- ‘Saxon, with these songs you are spoiling us!’

The full range of their now 43 year career was covered when the rapid fire sounds of the title track from last all-new studio album ‘Thunderbolt’ was followed by ‘Backs to the Wall’ from their very first album. I might have preferred the epic ‘Frozen Rainbow’ to be chosen but this was a night when it was hard to cavil at the setlist selection. 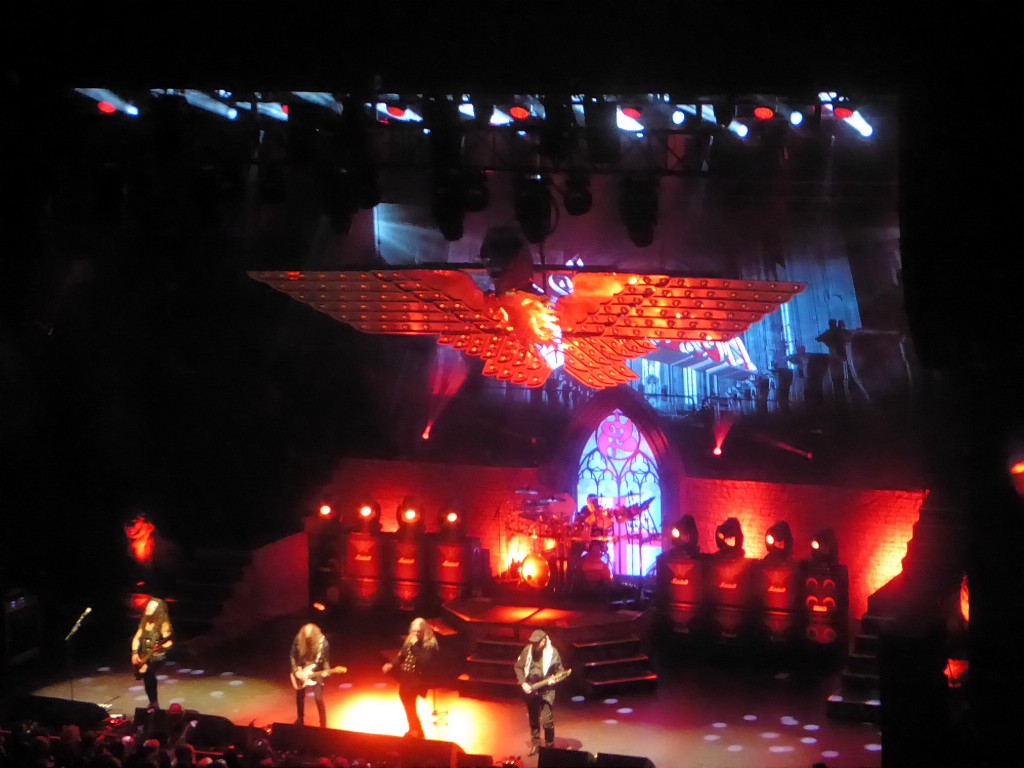 That huge Eagle lighting rig came down during ‘The Eagle has Landed’ and the song had a suitably epic feel notably with Paul Quinn’s feedback-strewn solo while Biff dedicated ‘Never Surrender’ to the fans loyalty during the pandemic, and was rewarded with a moshpit which looked like it was ever growing from my rather more coivd secure berth in the circle.  It was around this time when Biff related his promise to get his first ever tattoo if they sold out Hammersmith and I sensed he was having buyer’s remorse, not least with him now being on blood thinning medication.

Both guitarists shared the solos and were exemplary if unshowy throughout while a pair of title tracks as ‘Dogs of War’ segued into ‘Solid Ball of Rock’, complete with audience participation section, were a reminder that even when their popularity waned in the nineties, Saxon could still deliver the goods. However compared to those days Biff seems to have had a new lease of life with the 71 year old’s voice sharper and clearer than ever, helped it must be said by an excellent venue sound. His bluff humour showed when he explained the meaning of upcoming album ‘Carpe Diem’ was ‘seize the day- in Yorkshire’!

The treats kept coming with ‘Dallas 1pm’, apparently added to the previous night’s set, complete with backdrop and sound effects which almost made you feel you were witnessing the shots fired from the grassy knoll; ’And the Bands Played On’ (a reminder that at one point they were as much a fixture in the top 40 rundown as the Friday Rock Show); and ‘To Hell and Back Again’. A rather less frantic ‘Power and the Glory’ was one of my favourites of the night, with an excellent solo from Doug,  then Biff teasing with a repeated cry of ‘fill your head…’ before an outpouring of energy both onstage and in the crowd to ‘Heavy Metal Thunder’.

There was plenty of time for encores and after I feared they wouldn’t play it, ‘Crusader’ was a good example of how they made the most of the stage set up, Paul coming down from the elevated walkway as he played the intro to this much loved epic. That led into a couple of crowd pleasing classics that so many of us of a certain age grew up on- after ‘747 (Strangers in the Night)’ with the guitarists sharing the solos, Biff brought Paul to the front of the stage and though I knew what was about to happen I couldn’t resist a bit of air guitaring from my seat as he punched out the opening riff to ‘Princess of the Night’. 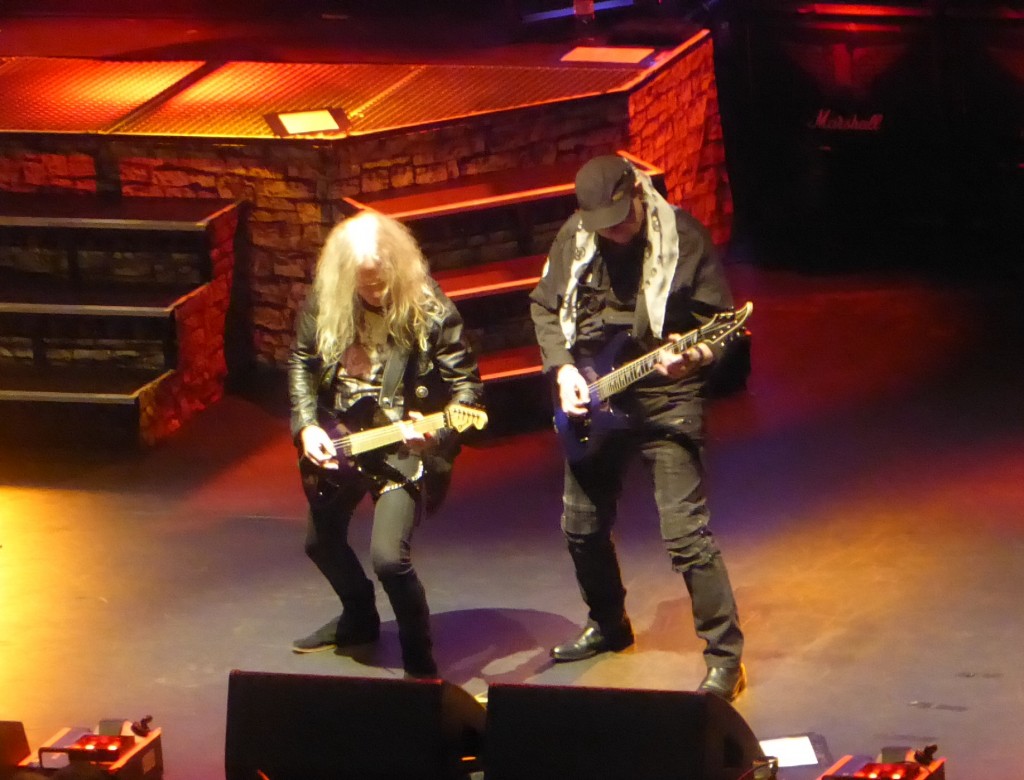 The weekend saw them announce a 20022 tour in support of ‘Carpe Diem’ (already given a rave review on this site) which I am sure will be up to their usual standard of excellence, but it will struggle to match this very special night. For once, the larger venue allowed them to take a leaf out of the books of their one time NWOBHM contemparies Def Leppard and Iron Maiden and use an elaborate stage set to choreograph the show around. Combined with the atmosphere of anticipation and a set of generous length based on their crowd pleasers, I left thinking this must be my favourite of all the many Saxon shows I have seen over the years.