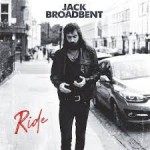 Album number five from the critically acclaimed guitarist Jack Broadbent. Hailed as “The new master of the slide guitar” by the Montreux Jazz Festival and “The real thang” by the legendary Bootsy Collins, Jack Broadbent has wowed international audiences with his unique blend of virtuosic acoustic and slide guitar, and poignant folk and blues-inspired vocals.

“I had to come off the road because of the Covid pandemic and was going to work on a solo project of acoustic material,” he explains. Instead, with Quebec-based drummer and co-producer Mark Gibson, “…we started playing some of the more rock ‘n’ roll stuff I had, and we couldn’t deny that there was a kind of vibe happening. So, I just went full steam ahead in that direction which brought the sound of this album into focus. We built on those grooves and ended up with ‘Ride’.”

The rock feel of the record is further established as the album was recorded as a power trio, with Jack Broadbent being joined by drummer Mark Gibson and bassist Mick Broadbent. Indeed, ‘I Love Your Rock N Roll’ rocks out like a good ‘un, perfect as a live set opener on his upcoming gigs perhaps? ‘Grace’ possesses a lovely acoustic blues beat to start things off, before the rhythm section segue in with their groove. They make it all seem so easy and effortless.

At the other end of the scale ‘Baby Blue’ allows Jack Broadbent to highlight his undoubted guitar playing skills, as well as providing one of the album’s vocal highlights. ‘Who Are You?’ is a winning mix of blues and rock. Loving the keys that add thet little extra bit of class to the song.

Eight songs in under forty minutes, Jack Broadbent doesn’t hang around and it is all top quality blues infused music. An album to be enjoyed by the casual blues fan, as well as the hardened blues fanatic. Impressive work Mr Broadbent. ****