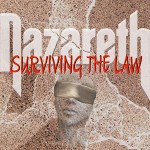 Most music reviewers weren’t born when Nazareth started up, and few bands are still rocking as hard, to enthusiastic acclaim, 54 years later.

Surviving The Law is the band’s second album with Carl Sentance on vocals.

Here’s what we said about the first, Tattooed (2018) : “It must have been tempting to crank up the weapons grade hard rock, and bludgeon an always forgiving fanbase into submission, but it’s arguably their most consistent, inventive album for some time”.

The new album continues where the last left off. With producer Yann Rouiller, they’ve pushed themselves to offer a yet more adventurous, fresh sounding collection of songs, matching the solid, reliable hard rock of the old with the imaginative arrangements and song structures of the new.

And so they have created a very distinctive version of Nazareth, from the raw, moody, multi layered, Nirvana like hard rock of ‘Strange Days’, to the almost whispered confessional, ‘You Made Me’. The latter’s cool use of Hammond organ underpinning reaches right back to the nascent Brit Blues Rock sounds of John Mayall and Chicken Shack.

Jimmy Murrison’s guitarwork – taut, tense, unshowy and loud – is the backbone of the album. The bolted to the floor rhythm section of the Agnews, Pete and Lee, keep it bass heavy and well grounded. But it’s Murrison’s axework that does the heavy lifting … pushing Sentance’s vocals to its limits on ‘Runaway’ or delivering relentlessly clanging, clawing axework on ‘You Got To Pass It Around’, while Sentance sings like he’s a soul man  auditioning for Roy Wood’s Wizard. It’s cool how they work in tandem, carving out their own attractive little niche in the rock’n'roll wall of “how to do it different”.

Other highlights, like the solid, bluesy, seventies hard rock and rolling momentum of ‘Love Breaks’, and the belting Grunge rock of ‘Psycho Skies’, a serious deviation from their tried and tested path, turn these tracks into true delights.

No question, this is music that marches to the beat of its own drum.

The Nazareth sell-by date is still way out of sight. ****