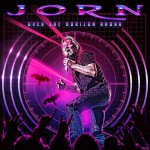 Jorn Lande has worked with guitarist Tore Moren since The Snakes in 1998.

These two have been in each other’s company for so long that they must by now have developed some kind of musical telepathy.

With Lande and Moren on top form, the rest of the band – Adrian SB, guitars, Nik Mazzucconi, bass, Alessandro Del Vecchio, keyboards, and Francesco Jovino, drums, are running to stand still. The result is an accomplished hard rock album that defies fashion.

Lande is on his 10th solo album now, and each recording adds a new layer, building on the past as the future comes down the road toward us at an alarming rate.

Still, this new album is no post-modern, heavy rock freakout full of sonic improvisation – it still sounds like Lande. He keeps a tight rein on everything, though on on some of the more minor compositions – like ‘In the Dirt’’ and ‘Black Nightshade’ – you may have some doubts. Both have sturdy, steel spined choruses, but in each case the journey through the preceding verse and bridge is not so memorable.

The title track ‘Over The Horizon Radar’ and ‘My Rock’n'Roll’ are stamped out from Snakes’ shaped templates. Arguably ‘One Man War’ belongs in that group, but is differentiated by Lande’s lyrics. Much more Dio’s storytelling than Coverdale’s cliches.

There are times you could perhaps argue – ‘Black Phoenix’ and ‘The Winds of Home’ – that the dynamic of Lande’s vocal is undercut by the propulsion of Moren’s guitar. Closer examination again confirm it’s just a match of outstanding talents, each feeding into the other.

In fact it’s an album that mixes the immediate -’Special Edition’, ‘Believer’ – with, to use an old fashioned term, growers – songs that repay repeated listening. The rerecording of Lande’s failed Eurovision entry ‘Faith Bloody Faith’ to close the album, is the perfect definition. ****