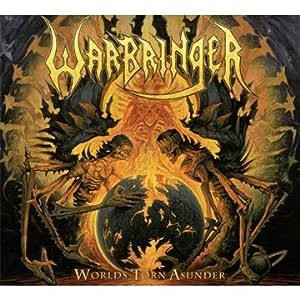 The year 2004 is a seminal one for Thrash Metal as it witnessed the birth of a number of young acts who are directly responsible for what has been widely recognised as a revival of the genre. One such acts hail from the mighty California, home of legendary acts such as Metallica, Exodus, Forbidden, Sadus and Testament (amongst others), and it is a five piece combo called Warbringer.

Even though I was initial fairly negative towards this so-called revival and all the bands promoting it, and if I am to be totally honest with you, I still am to a certain extent, Warbringer was one of the few bands that I have managed to warm to as a result of a very energetic and enjoyable show that they performed in front of a London audience one year ago. And so, I happily took upon the challenge of reviewing their latest studio album “Worlds Torn Asunder”.

One of the main things I remember about Warbringer, as a result of the above-mentioned show, is how much influenced they are by the works of the mighty Exodus – influences which are clearly audible both in the guitar and vocal department. My main concern back then, as it was now, was whether these young lads would find themselves ‘trapped’ by this legendary style glorified by the mighty axeman Gary Holt (Exodus) to the point where getting their own personality to shine through would be simply impossible.

What the ten compositions on “Worlds Torn Asunder” clarified for me is that there is a way for a young band to create a writing process, whereby classic Thrash elements of the late 80s/early 90s can indeed combine with fresh ideas, resulting in material that can satisfy both old school fans such as myself as well as those young lads who have the passion and energy required to enter a mosh pit.

Opening your new album with a song like “Living Weapon” is a very smart decision indeed as mid tempo rhythmical riffs, flamboyant solos and band backing vocals in a short memorable refrain is what Thrash Metal is really all about.

In the even more simplistic vocal tunes of “Shattered Like Glass” there are traces of Death Angel influences in the vocal department whereas “Wake Up…Destroy” is the first track of the album where Swedish-sounding modern Metal elements infiltrate the band’s normally classic sounding riffs and melodies.

Consolidating this fresh approach with the follow up “Future Ages Gone”, the band shows its compositional maturity in “Savagery” – a five minute opus filled with a variety of neck-breaking riffs, skilled guitar solos and atmospheric lead melodies. In the melodic solo and twin guitar theme of “Treacherous Tongue” the band looks towards the mighty Iron Maiden for inspiration while the combination of John Kevill’s powerful screams, up-tempo guitar riffage and band backing vocals in “Echoes From The Void” singles it out as one of the highlights of the album.

“Enemies Of The State” is another bombastic tune which will almost certainly attract your attention while the acoustic theme of “Behind The Veils Of Night” will pave the way for the more rhythmical heavily-distorted tunes of “Demonic Ecstasy” – the last composition of the album!

When I started listening to “Worlds Torn Asunder” I did so thinking that even finding this album remotely interesting would be a successful outcome so the fact that I really started loving the material on offer is indeed a welcome surprise.

Even though these five lads are still pretty much attached to the same Exodus influences that characterised their previous two studio albums, there is indeed a desire to move things forward by investing in themes and melodies of an era more recent that the late 80s/early 90s.

That can only really work to the band’s benefit as I feel that there are already too many ‘cover’ bands out there. As for how much they can musically evolve as a band? Only time will tell but I, for one, am now quite willing to find out!

PDF - you can delete unwanted sections
This entry was posted in ALL POSTS, PURE METAL (All posts), Pure Metal/Album reviews. Bookmark the permalink.