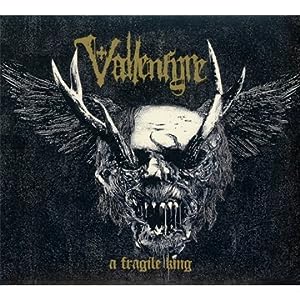 Human loss is dealt with in a personal way by anyone affected by it, but it has also been one of the topics that art, as a channel for conveying human emotion, has dealt with since humans first start expressing themslves through this medium.

So, what is it that you do when you are a high profile artist who normally deals with such things by grabbing your six string? I can only tell you here what Gregor Mackintosh (founding member of Paradise Lost) did when faced with the loss of his father back in late 2009 – he contacted some of his high profile friends, such as My Dying Bride’s axeman Hamish Glencross and Doom bassist Scoot and under the moniker Vallenfyre released “A Fragile King” – an album consisting of eleven songs combining elements of early 90s Death Metal as well as moments of atmospheric/emotive Doom brilliance.

If one were to describe the music of Vallenfyre by using references to the works of their main influences, then the foundation riffs of every one of the eleven compositions on offer are similar to those found on the first two albums of the Swedish powerhouse Entombed.

What you should expect to come across, therefore, are tons of dirty-sounding, low-chorded, groovy guitar riffs whose affiliation is equally split between Metal and Punk . This is fairly justifiable, considering Gregor’s musical upbringing and his soft touch for bands like Discharge and Amebix.

What elevates Vallenfyre from a tribute act to that of an outfit of individual quality is their ability to come up with numerous stupendously simple, but also painfuly emotional melodies in the guitar department which they then adorn with powerful growl Death Metal vocals – putting even early-era Nick Holmes vocals to shame!

The opening track “All Will Suffer” is a simply crafted piece which combines slow melodic lead guitar melodies with mid-tempo head banding riffs, ideal to warm you up and prepare you for “Desecration” – with five minute galloping riffs and an unbelievably catchy lead melody that will resonate in your mind for hours.

In “Ravenour Wh*re”, Vallenfyre follow a more brutal, early 90s back-to-basics approach while in “Cathedrals Of Doom” they are not afraid to show their respect towards the mighty Cathedral whilst indulging in slow mournful melodies, while at the same time bombarding you with numerous groovy mid-tempo riffs and flamboyant solos. “As The World Collapses” is another groovy rhythmical beast, whereas “A Thousand Martyrs” is elegant and aggressive in equal proportions.

One of the songs that truly stands out is the five minute “Seeds”, a track whose haunting melodies and epic lyrics are spine-tingling – quite a contrast to the more straight-forward galloping tunes of “Humanity Wept”. “My Black Siberia” is another outstanding composition as a result of a great selection of lead melodies in both the guitar and vocal departments, while both the “The Divine Have Fled” and Doom opus “The Grim Irony” will provide a few more moments of enjoyment prior to the final curtain call for this quite impressive album.

Past experience has taught me to approach supergroups with much caution, however I am happy to say that Vallenfyre is indeed an exception to that rule. Come to think of it, I do not believe that ‘supergroup’ is an appropriate term for Vallenfyre as it is clear that the purpose behind the creation of “A Fragile King” is an honest quest for emotional expression rather than a desire to cash in on the popularity that the members of this project enjoy through their main bands.

As a person who grew up listening to bands like Entombed, Paradise Lost and Candlemass, I find this musical proposition to be quite irresistible and I hope that it won’t be long before this group of musicians gets back together again to record new music – hopefully for reasons less painful…

PDF - you can delete unwanted sections
This entry was posted in ALL POSTS, PURE METAL (All posts), Pure Metal/Album reviews. Bookmark the permalink.