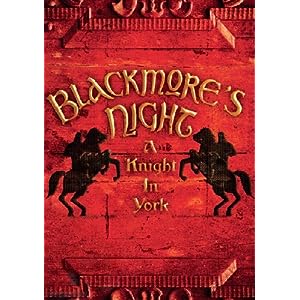 Back in 1997, when guitar legend Ritchie Blackmore decided to abandon the world of classic Rock and instead indulge in his medieval folk musical fantasies with the help of his now-wife Candice Night, there were many people who thought (or, even better, hoped) that this would be a passing fad. Fifteen years and eight studio albums later, their creative outlet Blackmore’s Night is a very specialised but highly successful collective that has helped them build a strong following around the world. They have also had their pick of outstanding locations, including castles and old theatres, and one such inspiring venue was the Grand Opera House in York – the place in which the duet Blackmore/Night and their fellow musicians decided to record the band’s third ever DVD, cleverly entitled “A Knight In York”.

There are many things to be said about this release, most of which are positive and only a handful of which are negative. Though, sadly including no tracks from the band’s first two studio albums, the strongest attribute of this release is that it features only three compositions than can be found on the previous two DVDs of the band. Most importantly, however, “A Knight In York” is the audio and video representation of a great show – one featuring a woman with a great stage presence and outstanding vocal capabilities, a man of unique skill and talent who makes his guitars sing and does so in a manner that looks truly effortless, and, finally, a group of musicians whose contributions on both conventional and renaissance folk instruments are more than complementary – they are damn impressive. Simply said, “A Knight In York” looks like one of those shows that you would consider yourself to be lucky to have attended and envious of those who had if you can now only possess the DVD.

Strangely enough, the first three tunes of the show, among which the violin driven “Locked Within The Crystal Ball” and the up-tempo “The Circle”, are not from the band’s latest (at the time) studio offering but the crowd doesn’t seem to mind at all, clapping their hands in excitement. This is something that was repeated many times throughout the show, as both Candice Night and the band’s hooded bassist Earl Grey of Chimay left no opportunity to clap go amiss. Blackmore was in a great mood, as attested by his impressive tear-jerking solo during “Journeyman”. One of the loveliest moments in the show was when the couple’s one year-old daughter Autumn appeared on stage and one of the funniest was when keyboardist Bard David of Larchmont appeared on stage sporting a white wig half way through “Toast To Tomorrow” and performed the main ‘vocal’ theme of Lady Gaga’s (!!!) hit ‘Bad Romance’ – a theme that was met with a standing ovation by the crowd. Other highlights were Candice’s ethereal vocals on “Barbara Allen”, Earl Grey’s commanding bass tunes in “Darkness” and beautiful cover of the Bee Gees’ classic “First Of May”, after which the band took its bows and left the stage, much to the audience’s displeasure.

Ok, so if the venue was truly fitting, the song choice appropriate and well balanced and the individual performances inspiring then what is it about this DVD release that could be criticised? Simply put – there aren’t any extras. Apart from a four minute video entitled “A Day In York” which features images of medieval monuments in this great northern city and a handful of costumed fans set to the melodies of “Minstrel Ball”, there is absolutely nothing else – no interviews, no ‘the makings of’ no-nothing. That is why “A Knight In York” is a must-have for fans of the band and a potentially interesting
purchase for all the rest. Ah, if you do choose to add it to your collection, which I hope you will, you may want to opt for the digipack Deluxe Edition which features an additional CD with the audio version of the concert.