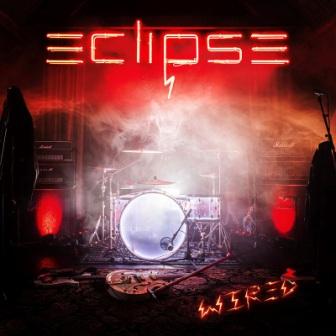 Eclipse have been on one the hottest streaks in melodic rock of recent years- even last year’s stop-gap live album ‘Viva la Victouria’ being a reminder of quite how many anthems they have written. And with singer Erik Martensson having already written the bulk of the W.E.T. album which is an early contender for album of the year, expectations are high.

Previous albums over their now 20 year career have shown progression from one to the next. However they have now settled on a winning formula with the direction on ‘Wired’ very similar to its predecessor ‘Paradigm’, and indeed the W.E.T. album.

The sound has been honed to the extent that while still rocking hard, instrumentation is kept relatively simple and solos to the minimum, so songs are rarely given pace to develop before a big chorus takes over. The production has a modern feel and the guitar sound is razor sharp.

However opener ‘Roses On Your Grave’ is a massive disappointment- the hook below their usual melodic quality and Erik’s voice sounding rather harsh.

Fortunately things pick up with ‘Dying Breed’ before ‘Saturday Night (Hallelujah)’, even though somewhat similar in style to its predecessor,  raises the bar for Eclipse anthems even  higher – the ‘hallelujah for the weekend’ chant in the verse would be  strong enough as the main hook for any other song, even before a main chorus worthy of fellow countrymen H.E.A.T.   If they still existed as I knew and loved them, this good time anthem would be packing out rock clubs.

‘Run For Cover’ touches on the celtic-themed guitars that have characterised their work with a furious solo late on as Magnus Henriksson is belatedly let off the leash while ‘Carved In Stone’ is more considered with a lengthy acoustic intro of over two minutes before bursting into life in a second phase, with a touch of Shinedown or Daughtry. ‘Poison In My Heart’ follows a similar structure.

‘Twilight’ harks back to their heavier ‘Bleed And Scream’ era with some power metal style ‘who-oahs’ and a clever insertion of Beethoven’s ‘Ode to Joy’ (or Rainbow’s Difficult to Cure’)  in the guitar melody.  Yet while ‘Bite The Bullet’ also relies on a metallic riff, the pace is taken down in unusual fashion mid-section with some very twangy guitar playing over a sparse drumbeat.

‘Didn’t Come To Lose’ has celtic themed hooks and a chanted chorus and ‘Things We Love’ even more so with ousting guitars like a more metalised Big Country. Final track ‘Dead Inside’ is not one of the strongest but explores different sounds.

The critical will withhold full marks as the band are just starting to retread past glories – but there is no doubt that after some initial disappointment this is a very good album with Mr Martensson’s Midas touch showing no sign of ending.  ****1/4

Congratulations on your latest album ‘Wired’ which has made the top 3 in Sweden and the top 30 in Germany. How does the band manage to keep themselves in the limelight, especially given the enforced months of the road?

We’ve been working hard at keep writing songs and staying active at social medias. Besides that we released a live dvd/Bluray and a cover song. All this to not lose momentum during this long break.

Was it any different writing and recording ‘Wired’ during the pandemic? Does the band normally record together or is it like many bands now where parts are recorded at various locations and then brought together at the production stage?

We’ve always composed and recorded together in the same room (Erik’s studio that is) so we did the same procedure this time as well. We never had any real lockdown over here so we were free to keep traveling to each other. I wouldn’t say it was any different at all. It was just a bit more depressing given the circumstances.

What was it like coming back to play the band’s first show since the pandemic began? Have you noticed audiences are even more receptive and enjoying the live shows?

It was a weird feeling for sure. You could sense a feeling of happiness and relief in the air. Like people were thinking “Is this really happening”. We were quite nervous as well. Everything felt so new to us. We were just trying to enjoy and be in the moment as much as possible cuz no one knew when next time would be.

You’ve got the Monsters of Rock cruise early next year. How do you approach a setlist for a show like this? Will you be playing multiple sets and/or acoustic shows?

We will likely play 2 full shows electric. Last time we played 1 set at the theater. The other set a couple days later outside at the pool deck. We’ll probably alter the set list for the 2 shows to some extent.

Eclipse celebrates twenty years since the release of your debut album ‘The Truth and a Little More‘. Are there any plans to re-issue this at all?

We’ve said that IF we’re gonna re-release it it’d probably be on a cassette or some other weird format.

We’ve have no interest in releasing it on Spotify and/or CD. We’d rather make good new music instead of promoting a bad album ha ha!

What are you tour plans for 2022? Any chance of a double bill of Eclipse & W.E.T. something I know fans of both bands would love to see.

There will be 1 or 2 tours definately. We just haven’t sorted it out when and where yet. A double bill with another band we would be really cool. We have a few ideas in mind. Let’s see what happens….

We WILL meet next year! It will finally happen and nothing will stop us anymore. Love you!