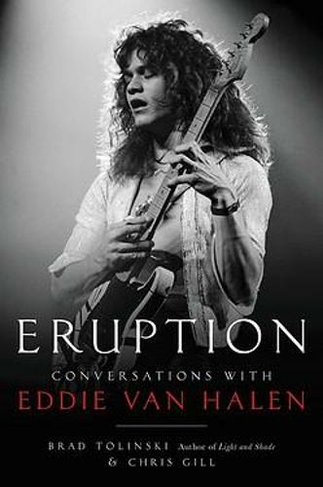 When Eddie Van Halen lost his prolonged struggles with cancer last autumn the rock world mourned – the number of Facebook friends who put his ‘Frankenstein’ guitar patterned design as their cover photo in memoriam being an indicator of that. There will be probably be lots of retrospectives over the coming years, but Brad Tolinski and Chris Gill have the advantage of having visited his 5150 studios many times to interview him over the years.

The format of the book is to have chapters in two parts – first a conventional historical narrative, in chronological order going back to his family’s arrival in California from the Netherlands, then a reproduction of a contemporary interview (though in rather slack manner these are not sourced).

The biography sections are very well written, but if anything they do an overly thorough job as the interviews then repeat many of the same points.  The balance does not seem quite right, given that the book’s selling point is the interviews with him.

However as guitar journalists, he seems to open up to them more than with a showbiz writer or even mainstream rock critic, and is consistently frank and engaging, the quality of his insights only suffering when he was newly out of therapy and quoting a lot of the psychobabble that goes with that trade.

If you enjoy chat of the relative merits of different humbucker pickups this is the book for you and dotted around the book are illustrated descriptions of some of his favourite guitars, called ‘Eddie’s Oddities’.

The text is also broken up with interviews, some historic and some post the great man’s death including contributions from son Wolfie, Michael Anthony and Gary Cherone, plus his guitar playing peers with the most interesting insights from one of the many of the new generation who followed in his wake in Steve Vai, on playing EVH’s guitar parts when in David Lee Roth’s band.

They successfully bring out both the artistic and scientific sides of his undoubted genius, from finding that self-exploration rather than lessons was the way to learn an instrument; to his never ending quest for new sounds and sonic perfection.

They also focus on highs and lows and there is an interesting account of quite how the failure of Van Halen 3 sent him into a professional and personal tailspin for some years. Interestingly the one era that is relatively glossed over is the platinum selling, arena touring early years with Sammy Hagar in tow.

Poignantly the last interviews before his illnesses progressed showed him happy contented, reunited with David Lee Roth and with son as well as brother in the band.

Part conventional biography, part oral history, despite being oddly structured in places, the book crams in a huge amount of information to provide casual fans and devotees with a thorough insight into a man who revolutionised guitar playing.  ****