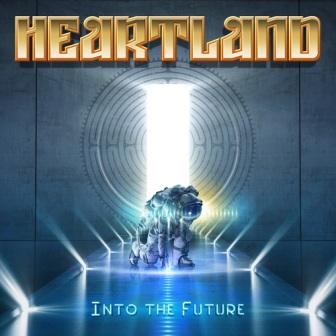 I assumed Chris Ousey had kicked the long career of Heartland on the head with their last album of new material coming back in 2007.

However, after his time with Snakecharmer and also fronting Kingdom of Madness for a while, he has resurrected the name. There is no sign of long time collaborator Steve Morris but more than ample consolation comes in the shape of Mike Slamer,  the former City Boy, Streets and Steelhouse Lane guitarist who for many fans whose playing and arranging skills are spoken of in hushed tones in the melodic rock world. He also worked with the singer on his debut solo album ‘Rhyme and Reason’ which was my favourite album of 2011.

He co-produces, mixes and is one of two guitarists alongside Jaded Heart’s Barish Kepic. Is it really Heartland though, you may ask? Well Chris Ousey’s distinctive voice always gave them their trademark sound, and he is sounding as good as ever.

Opener ‘A Foreign Land’ is outstanding, intelligently arranged, boasting bubbly synths similar to those heard earlier in the year from label mates Touch and a Magnum feel to the chorus. Indeed it was hearing this song on ARFM radio that made me do a swift volte face and volunteer for reviewing duties.

‘Caught Up’ has a little tougher feel and reminded me vocally of Mr Big while ‘A Living Thing’ is a slow burning ballad with prominent keyboards. ‘Giving It All Away’ has the AOR fan’s delight of a guitar riff and stabbing keyboards playing off each other.

However a trio of mid-album songs in ‘Dangerous Game’, with some muscular sounding keys, ‘Climbing Your Wall’ and ‘Mouth to Mouth’ , with a big riff and the Hammond organ adding colour, are not bad, but a little repetitive and lacking inspiration.

Fortunately ‘Not Guilty’ is better,  building momentum during the verses and livelier and more upbeat, then fast paced, vintage Purple-ish  ‘Bolt from the Blue’ offers something different.

‘White Lies’ returns to more conventional AOR with Ged Rylands’ keyboards prominent , and ‘Working For the Man’ is decently catchy but ‘When the Band Plays’ ends the album in average fashion.

This is a quality piece of work, and the productions and arrangements cannot be faulted. However the songwriting means it falls just short of the classic it promised to be.  ****