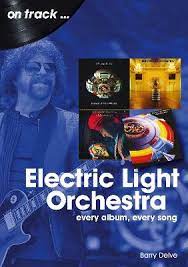 After a highly readable book on Queen a couple of years ago Sonicbond now publish a book based on my other all-time favourite band the Electric Light Orchestra (ELO).

Wisely Barry Delve focusses solely on ELO and doesn’t include the various Jeff Lynne solo, production duties and Travelling Wilburys, which as he rightly states deserve a book of their own. However, there is a brief look at Jeff Lynne’s solo albums in one of the appendacies, plus the Bev Bevan led Electric Light Orchestra Part Two get a brief overview. Mind, you keeping track of that band’s line-up and the subsequent ones of Orchestra would see Pete Frame running low on ink doing one of his famous family trees!

Drawing on already published interviews, Bev Bevan’s memoir and some new interviews with the album cover designers and more, Barry Delve certainly knows his stuff and gives a fair appraisal of each album and song, including B-sides and bonus tracks. He’s a big fan of ‘Julie Don’t Live Here Anymore’, one of ELO’s finest songs from the 80s yet it never made it onto the ‘Time’ album.

Only the debut album seems to get short shrift and to be honest it is very much an album of its time, with the two main songwriters Jeff Lynne and Roy Wood, seemingly battling to find the band’s sound and direction. It was only when Wood left after the first album that ELO started to blossom into the familiar sound loved by millions from the mid-70s onwards.

2001′s ‘Zoom’ gets credit, especially as it was seemingly a false start for Jeff Lynne and ELO, back with their first new album and tour since 1986. Sadly a focus on the US saw the tour wound up quickly and they never made a full UK tour at the time.

Luckily, through DJ Chris Evans at BBC Radio 2 back in 2014 asked Jeff Lynne how many texts he’d need to consider touring again. He answered 2,000 and the Radio 2 listeners sent over 14,000 texts which helped pave the way for the Hyde Park show in September of that year. Since then Jeff Lynne’s ELO (as they are billed now) have toured and released two studio albums to date.

A perfect read for fans new and old, which gets you digging out those albums for a listen and shows there was much more to the Electric Light Orchestra aside from their string of hit singles in the 70s and early 80s. The author sums up the lasting appeal of ELO’s music succinctly in this line – “ELO have always been there for me: it would be a terrible thing to lose.” ****