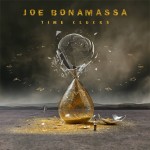 Joe Bonamassa’s ‘Time Clocks’ is infused with reflective songs – a function of a self proclaimed midlife crisis – but counterweighted by the kind of steely, restless determination that has projected him from being a child prodigy to international rock-blues stardom.

He’s drawn to exploring significant questions about the passing of time, his life on the road (or the recent lack of it) and the self, on an album that straddles both introspection and bombast on interesting songs.

‘Time Clocks’ is the work of a mature rock-blues artist anchored by the blues but never restricted by it. He’s more comfortable co-writing , meaning his essence comes through his emotive playing.

It’s a song driven adventurous album, though perhaps not as much as the short introductory ‘Pilgrimage’ audio collage might suggest. His consistently excellent guitar playing always supports the song first, while adding an additional dynamic thrust.

There’s a constant inventive choice of instrumentation from didgeridoo to sumptuous guitar tones and even a faux psychedelic finish one of his many career Zeppelin homages, called ‘Curtain Call’.

He switches the ignition with the pulverising riffs of the outstanding ‘Notches’, on an album that works hard to flow from the beginning to the dichotomous word play of the closing track ‘Known Unknowns’.

The latter is threaded together by some eloquent guitar playing before a final elongated stunning solo provides the perfect resolution to everything that has gone before, and also reaffirms why Bonamassa’s currency now spans generations.

‘Notches’ is a track of unrelenting intensity with a Celtic feel topped by muscular riffs, beefy bv’s and the kind Kevin Shirley avalanche of sound that Bonamassa revels in.

He teases out some expressive top notes over what feels like the constant flow of waves crashing onto a shore, on one of his best songs for years.

And having blown the barn door off it hinges he follows that with his new single, the well crafted James House co-write ‘The Heart That Never Waits’. The song benefits from a lilting chorus and cool use of metaphor: “It’s the train that never comes and the heart that never waits.”

The Bonamassa/House collaboration also provides another highlight in the shape of ‘Mind’s Eye’, the slow build of which owes much to Pink Floyd or David Gilmour in particular.

And if the brief, but broad based collage of ‘Pilgrim’ provides an unexpected album opening, then the title track is more of a proggy ‘kitchen sink and all’ opus.

A crunching chord intro is juxtaposed with a subtle slide and threaded organ line as the song moves towards an anthemic chorus. Bolstered by the booming bv’s of Juanita Tippins and Prinnie Stevenson this could be a Jim Steinman song, with Joe’s animated vocal attack evoking Meat Loaf.

And though it doesn’t quite achieve the kind of grandeur it strives for, it’s very much the thematic anchor track of an album which is an exercise in exploring where the song takes you.

‘Time Clocks’ feels as if it’s based round an overarching theme which he realizes by pouring all his potent musical ideas through a sieve, offset by the use of  a timeless ‘quiet to loud’ dynamic.

The core idea is further emphasized by Hugh Syme’s art work which in turn gives the album’s aesthetic a proggy feel.

It’s certainly Bonamassa at his most adventurous and bombastic with a big crescendo to round things off.

The stop-start ‘Questions And Answers’ has a sub-Latino feel, but never really shakes off a plodding tempo to overcome a sluggish languor. By the time of his exclamatory “look out”, his solo sounds as if he’s purposefully trying to inject some much needed spark into a song that has too much going.

And it’s that ever present feeling of reaching for something bigger that pervades an album full of lyrical enquiry and musical diversity.

It’s ironic then that on ‘Curtail Call’ he does the exact opposite, by recycling portentous Zeppelin riffs, albeit with interesting lyrics.

It almost runs out of steam at the 4.00 minute mark, until Joe’s snaking guitar line injects fresh vitality with a vibrant solo. It also could arguably also have been culled at the 4.56 minute mark, but that would rob us of the feverish string arrangement as part of climactic slow build into the psychedelic finish.

There’s a further left field shift on ‘The Loyal Kind’, a Bernie Marsden co-write that initially sounds like Jethro Tull,  from the Marin Barre style riff to the lyrical imagery of: “Maidens in the shadows,” and “horses in the stable and the dinner’s on the table.”

It evolves into a rock ballad with a lyrical tale of fidelity or otherwise and builds to a scintillating solo that perfectly fits a Whitesnake style rocker.

It takes the trusted Tom Hambridge to bring us back to the blues on ‘Hanging On A Loser’, the main line of which is: “If everything is so bad, why you hanging on a loser like me,” which would make a great country song.

Happily it’s far removed from that, being a Lachy Doley keyboard-led funky groove with a strong vocal, a catchy hook with insistent handclaps and some bursting slide leading to more scintillating guitar.

Having taken the long road home, Joe leaves us with the Alyssa Bonagura co-penned ‘Known Unknowns’, which builds imperiously to the kind of guitar driven finale that makes you want to listen to the whole album all over again.

‘Time Clocks’ may not quite be the stellar album fans hoped for, but at least half the songs here will surely fill his set list in future tours. Job done. ****