La Luz are, according to their bio, a “surf-rock / psych / 60’s pop trio”, fronted by guitarist and songwriter Shana Cleveland, who is joined by bassist Lena Simon, and keyboardist Alice Sandahl.

It never ceases to amaze me the amount of good music being created and released, in addition to discovering older albums you’ve never heard before. La Luz are another new name to me, yet they are now on their third album. The trio produce blissfully, dreamy pop steeped in a 70s sound, with plenty of added sound effects.

Songs like ‘The Pines’ and ‘Lazy Eyes And Dune’ are wonderfully trippy, harmony filled treats. At the other end of the scale ‘Metal Man’ sounds like an unreleased 60’s gem from say Jefferson Airplane. Another song on here that utilises all sorts of sounds and sonic effects.

Highly enjoyable on the ears and La Luz are out on tour in the US this year and due in Europe next year. Worth seeing them live if you can and until then enjoy this little bit of melodic bliss. ***1/2 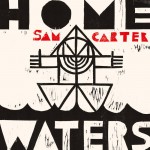 Midlands-born guitarist and songwriter Sam Carter is a highly-regarded instrumentalist, renowned by many as ‘the finest English-style fingerpicking guitarist of his generation’ (Jon Boden). Over the past fifteen years, Sam has toured the world, won a BBC Folk Award and supported the likes of Richard Thompson, Eliza Carthy and Martin Simpson.

‘The Forge’ and ‘Fly The Flag’ are the sort of songs you can imagine being covered by others. The latter’s sound is swelled by the added strings arrangement. The mesmerising ‘Slow Waves’ is a perfect tune to lose yourself in and relax.

Sam Carter possesses a strong voice and his guitar playing is something else. Very delicate, melodic and really draws the listener in. Seek this one out and you won’t be disappointed. ***1/2