Marillion are one of the hardest working live bands around and no surprise that they have wasted little time in getting back on the road after their enforced pandemic hiatus. Tonight was the first of a brace of gigs at the venerable Hammy Apollo. I found myself towards the back of the balcony with a few empty rows behind me on a wet, tube-struck night in town. 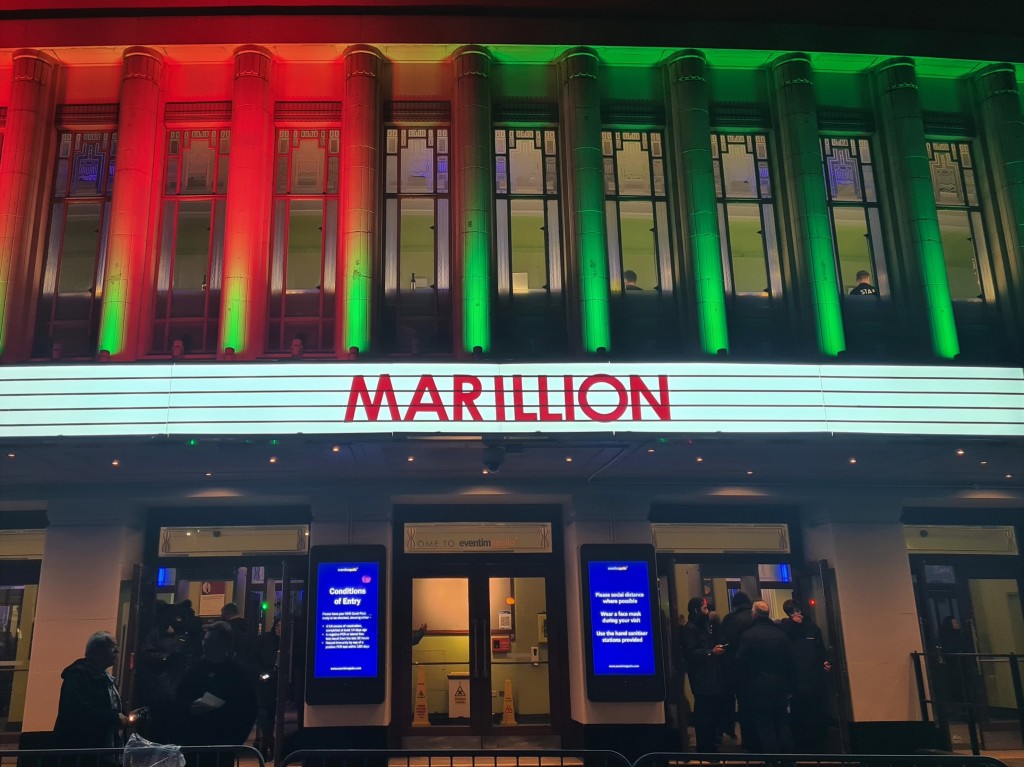 I’m pleased to say that I am a veteran of many fine Marillion gigs, and tonight was another quality, immersive experience well up to their lofty standards.

After such a long break, the atmosphere in the venue was something akin to an informal family reunion, only without the arguments. Warm applause greeted the band’s low-key arrival on stage and the equally restrained opening bars of ‘Sounds That Can’t Be Made’. This is not one of the band’s most played numbers and it was an odd choice with which to begin. Though well received, it was not the only setlist curve ball in an interesting night of high class entertainment.

Almost immediately, singer Steve Hogarth was into the chat, exchanging views with Pete Trewavas about the latter’s need to change the saddle of his instrument. ‘Can’t have you falling off the bass, can we?’ quipped Hogarth.

Next up was ‘King’, which provided a step change in vibrancy, with Hogarth’s strong vocal and little-used second guitar adding some depth and power to Steve Rothery’s heavy-ish licks and the first of many wonderful, dramatic solos this evening.

There was immediately more dialogue. This time about Marillion’s innovative Lightsaver crowd-funded insurance policy, which saw fans contributing to a fund that would have paid tour costs should coronavirus within the band have meant its cancellation. Conventional insurance brokers would not provide C-19 cover. There was a big shout out to Martin who had contributed in this way (and had one gig to go before he would get his money back!)

‘Easter’ is a firm fan favourite and was delivered here with respect for the original. Rothery was in the spotlight for the track’s centrepiece solo, which remains note-for-note the same beautiful fretwork that he laid down in 1989 on ‘Seasons End’, simply amplified in gravitas by the PA, the lights and the penetrating focus of the crowd.

The album ‘Brave’ has aged well. The first two tracks, ‘Bridge’ and ‘Living With the Big Lie’ were played here, though they don’t feature as often as others from the album, and both sounded fresh, with Mark Kelly excelling on the former. Elsewhere on this tour, the band has kicked straight in to ‘Runaway’, the third track from ‘Brave’. But tonight ‘No One Can’ was played instead, which felt like a let-down with its reedy, poppy refrain and lightweight guitar/keys warble.

I’ll admit that I’ve never liked this track and at such vulnerable moments I found myself wishing the band could be a little more energetic on stage. With Hogarth often behind his keyboard in the centre, the scene was sometimes static. Rothery and Trewavas were frequently rooted to their spots and without the diversion of a really good song, things got a touch sluggish.

Just a momentary weak spot however, because next came some new material: three parts of the ‘Be Hard On Yourself’ suite from the forthcoming ‘An Hour Before It’s Dark’ album. The three pieces formed a typically episodic Marillion track where each musician brought plenty of sparkle to a structure that was rocky and driven for the most part; and where Ian Mosley particularly shone. I’m not sure I’ve ever said that about Mr Mosley in a review before.

After ‘You’re Gone’, we were back to the deep dives. ‘The Release’ was originally the b-side to ‘Easter’ and has been pulled from the archives for this tour. It worked surprisingly well, providing the gig with a good dose of twin-guitar oomph and zesty melodies. The enthusiastic audience response to a relatively unknown track suggested everyone was keen to see a bit more levity. 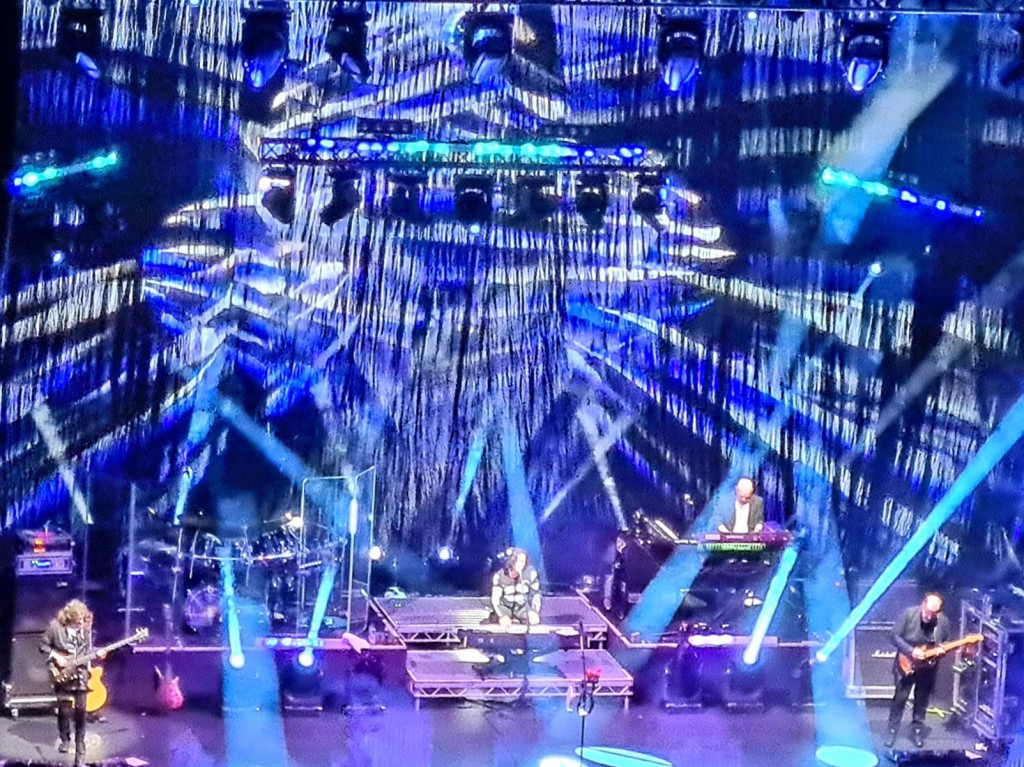 The main set closed with ‘Neverland’ a 12-minute opus from ‘Marbles’ that brought back the intensity and some wonderfully uplifting moments, particularly with Rothery and Kelly combining exquisitely in the second half of the track and Hogarth’s fraught vocals rising above. In the closing moments, we saw a glimpse of real emotion from the normally impassive Steve Rothery, throwing his head back and feeling the moment as his guitar swooped and spiralled. This was Marillion at their finest.

The first encore returned to the chilled atmosphere of the family get-together with a good rendition of ‘Afraid of Sunlight’ followed by a bit of pranking between Trewavas and Rothery that led to a few bars of Van Morrison’s ‘Moondance’. A Hogarth ramble about a fisherman in Rotherham who once threatened him until the played played ‘Delilah’ led, circuitously into a largely acoustic, almost sing-a-long ‘Made Again’. And they were gone again.

The final encore was one of the most impressive mini-sets of the gig: The five parts of ‘The Leavers’ series from ‘F.E.A.R.’. These 20 minutes or so were a microcosm of everything the band has to offer, from powerful, thought-provoking lyrics through the tense moments, joyride crescendos and dramatic peaks of modern progressive music.

The final chapter, ‘One Tonight’ finally saw Hogarth, Trewavas and Rothery together in the centre of the stage actually interacting with each other as the track built to its thrilling climax. The crowd responded in kind.

And so ended another great night in the company of Marillion. A privilege to be here. Nevertheless, I was left feeling that the band had missed a trick somewhere along the line by not including a couple more of the rockier tracks. The crowd were surely crying out for a couple of measures of more visceral participation that ‘Made Again’ didn’t quite deliver. How well would a gung-ho ‘Uninvited Guest’, ‘Paper Lies’, ‘Hard As Love’ or even ‘Hooks In You’ have gone down? Ah well. Perhaps I’ll be forever in search of the perfect Marillion set list. In the meantime, this would do very nicely thank you very much.