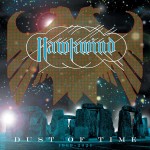 Synonymous with Space Rock and the surprise hit single Silver Machine, Hawkwind are one of the UK’s most revered and hard working rock bands. Formed in the late 60s, they mixed blues rock, progressive and space rock, later blending in hard rock and, as we moved into the 90s, ambient and trance (I blame it on the mushrooms), the band have released over 30 studio albums (with over 20 charting), numerous live albums and even more archive releases. As for compilations? Don’t go there. Noteable alumni include Motorhead’s Lemmy, Rob Calvert, Ginger Baker, Huw Lloyd Langton, and sci-fi writer and poet Michael Moorcock, and the band have to this day remained centred around guitarist/singer/songwriter Dave Brock. Like them (or a bit of them) or not, Hawkwind are a British institution.

This compilation is, before I even press play, one of the best. For a start there’s the wonderful package, a box that opens up to a poster and thick booklet (loads of text, and lots of rare records too). Then we get six CDs in card sleeves.

Disc 1 covers the period 1969-1973, when the band were signed to Liberty/United Artists. Much of this disc is what many traditionalists prefer, when the proto blues rock quickly became their trademark space rock. Guitarist and guitar roadie Lemmy joined on bass because the position needed filling, and during that period provided many lead vocals, including the classic Silver Machine. Not a bad song here.

The second disc covers 1972-1975, another classic period. Kicking off with the 11 minute Brainstorm, there’s plenty of effects over the pounding bass and guitar. Orgone Accumulator and Assault & Battery run to a similar length, and the shorter acoustic The Watcher provides a nice respite. Magnu – 8 minutes of cacophony or a space rock dream? I’m definitely with the latter. Shame there’s no ‘Motorhead’ (a single b-side and the last track Lemmy wrote for Hawkwind before being fired) but that’s a minor quibble.

Disc 3 covers 1976 to 1979, and four albums that saw the band signed to Charisma. The start of the revolving doors of personnel, a touch of hard rock, and further proof that Hawkwind dipped into proto punk, especially with their urban and sci-fi themes. Astounding Sounds And Amazing Music is a criminally overlooked album; well, these four albums are. Quark, Strangeness And Charm is a classic, and the album 25 Years (issued as The Hawklords for temporary legal reasons) even dips into post punk new wave, but still fits in perfectly. The final Charisma album PXR was my intro to the band remains a favourite. Tracks like High Rise (a wonderful urban comment) and the 8 minute Robot are regular listens in this household.

Covering one Bronze and three RCA albums, disc 4 takes us 1979 through 1982. Ginger Baker dipped into the band during this period, and Michael Moorcock returned to provide lyrics. There’s some solid driving rhythms and a good guitar solo or two, but the spaced out undertones remain. Motorway City (also a single) stands out.

Now the catalogue is a little more rushed through, although the band weren’t quite as prolific. Disc 4 covers 1982 to 1992. Opener Night Of The Hawks is one of the band’s finest (uptempo riffing aplenty), and Needle Gun remains a catchy favourite. But from then on Hawkwind experimented a bit more, seamlessly transforming their blend of prog and space rock in to a more ambient trance style of rock music. This is where many prog rock fans checked out, but the space rock fans got it.

The final disc continues this theme, covering 1993 to 2021. There remains a rock undertone but there’s a real journey we’re taken on here. The eleven minute Space Is Their Palestine is an enjoyable trip. Tracks like Love In Space nod to Spade Indie, and while there’s plenty of merits, it’s a little disjointed compared to the pre 84 material.

It would be unfair to complain about the track list, as it impossible to do such a prolific catalogue over just 6 discs. Consider this a wonderful cross genre introduction, or a soundtrack to the wonderful book that comes with it. There’s a lot of hits, not many mises, some live and single edits, and it’s a fantastic package. Enjoy, and if you want to explore further, Cherry Red / Atomhenge have done a very fine job on reissuing much of the Hawkwind catalogue in complete form. Essential. *****