Album review: BITE THE BULLET – End of the Line 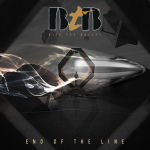 Bite the Bullet trace their origins back to 1986 and still feature the original duo of Mick Benton (Vocals, Guitar, Bass, Keyboards) and Graham Cowling (Drums). They released a strong comeback album, ‘Black and White’, on Escape early last year and now they are back a year later with another new album.

Malcolm Jones joins again to add guitar as Bite The Bullet go more down the FM route, as opposed to Mr Mister, although ‘Camaraderie’ really sounds like primetime Mr Mister and features some the album’s best guitar moments. But the one band that really comes to mind is Brian Howe era Bad Company, especially on ‘Over You’ and ‘Cold Wind’, the latter given extra pizazz with keyboard horns. Rick Benton has that classic rock vocal that whilst very melodic, has a hint of roughness to it.

The title track gives FM a run for their money, with plenty of meaty guitar riffs to enjoy. At the ballad end of things ‘Lost For Words’ is a bit tasty, featuring a harmony filled chorus and a passionate vocal from Mick Benton.

‘Base Jumping’ sees them sign off the album on a high. A very catchy hard rocker which highlights this album’s heavier style. Reminiscent of Shy at times.

Another well-crafted piece of melodic hard rock from Bite The Bullet, who should be in the collections of any melodic rock fan. ****