Never have I seen a queue so big so early at the 02 Academy in Bristol, particularly on a school night – and this had nothing to do with the time taken to show covid status and get in, which was smooth and efficient, but everything to do with change to the support act. Originally, British Lion were due to support, but they pulled out with only a month or so to go, citing the Darkness’ covid requirements as unreasonable. Filling that support act is none other than, NWOCR breaking band, Massive Wagons with a 30-minute slot to showcase exactly what they’re about. 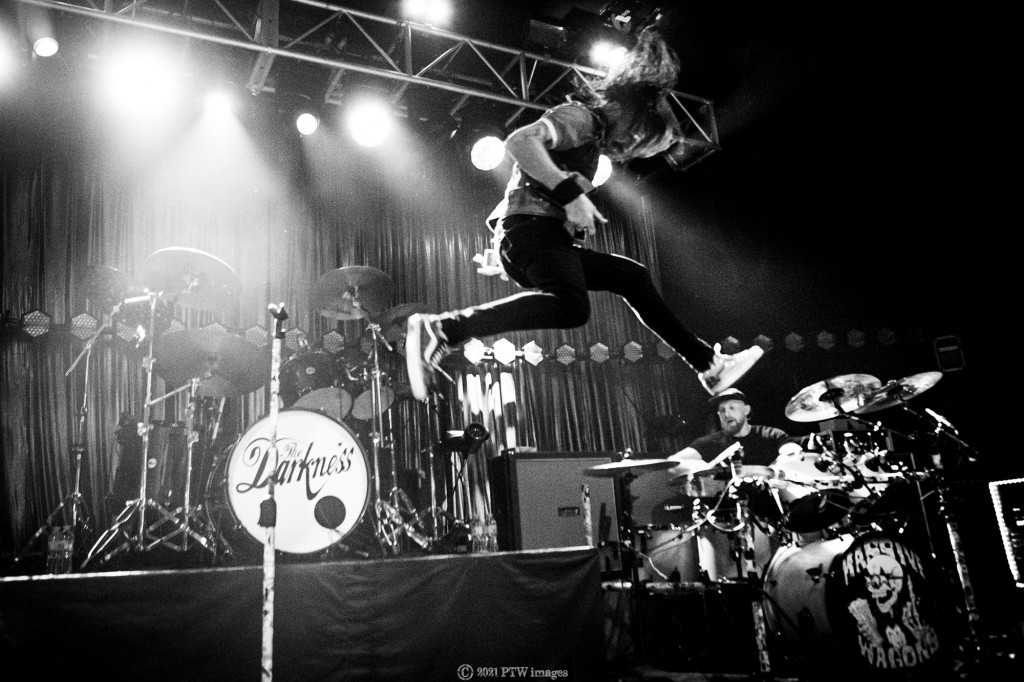 There are a few Massive Wagons fans in the crowd (me included) and the excitement is building as those of us who have seen Wagons before, know the rest of the crowd are going to be inducted in a blast of high-octane rock.

Launching onto the stage to Fee Fi Fo Fum, Baz and band start as they mean to go on, delivering high energy, fast paced rock to Bristol, the floor fills up quickly as people come to check them out. Baz working the stage and crowd from the opening riffs of ‘In It Together’, ‘China Plates’ for those who live their lives vicariously through social media, this song is for you! The set includes a crowd pleasing, sing-along  cover of The Clash’s ‘I Fought the Law’, by which time Baz has them eating out of hands, fist pumps all round. Closing out with ‘Ratio’ and ‘Back to the Stack’ to an enraptured crowd, it is pleasing to hear people acknowledging how good they are, new fans definitely made – great to see the band having a ball too, whilst delivering a great performance. In my humble opinion, the sound levels were set for the headliner so make sure you check Massive Wagons out on other channels if you weren’t convinced of how good they actually are. 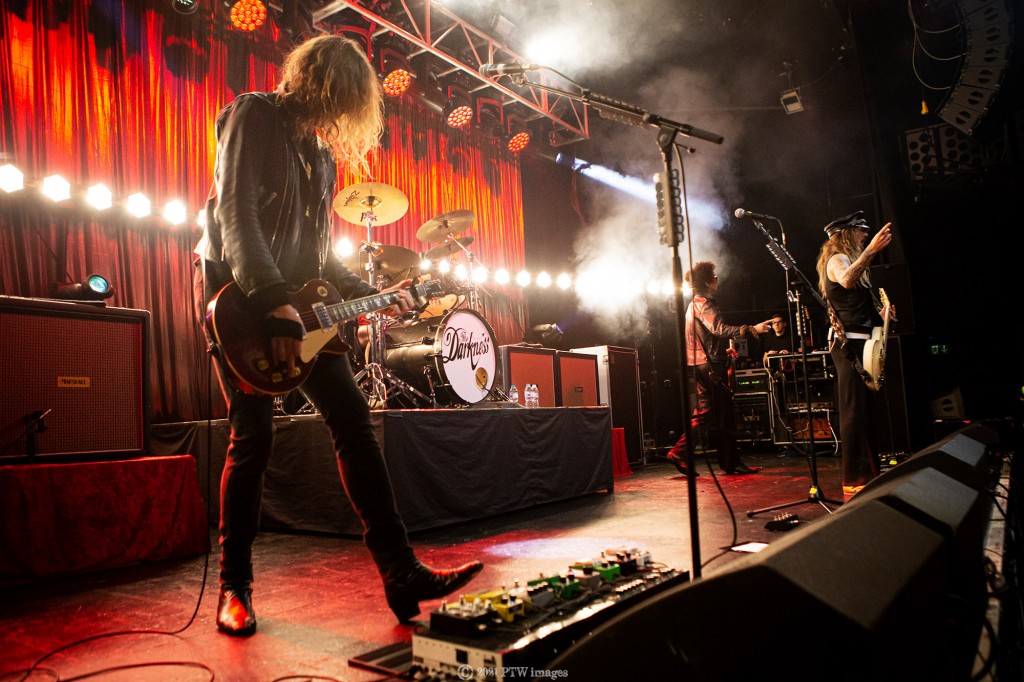 The Darkness grace the stage with their presence to ‘Welcome Tae Glasgow’ and Justin is in his usual understated attire, looking like one of Village People in his leather trousers, jacket and cap combo – tonight is definitely a treat for those of us who love a lively frontman. They launch into ‘One Way Ticket’, followed by another the crowd favourite, ‘Growing on Me’ and we are rocking!

Introducing songs from the new album, Motorheart and then returning to the back catalogue with ‘Black Shuck’, ‘Friday Night’ (from the crowd participation, you wouldn’t think it was a damp, cold, stormy night in Bristol that’s for sure) and ‘Love is Only a Feeling’.

Justin’s legendary taste in catsuits continues with a cheeky gold version that looks like it was fashioned out of 1970’s curtains – you can’t knock him for being out there! 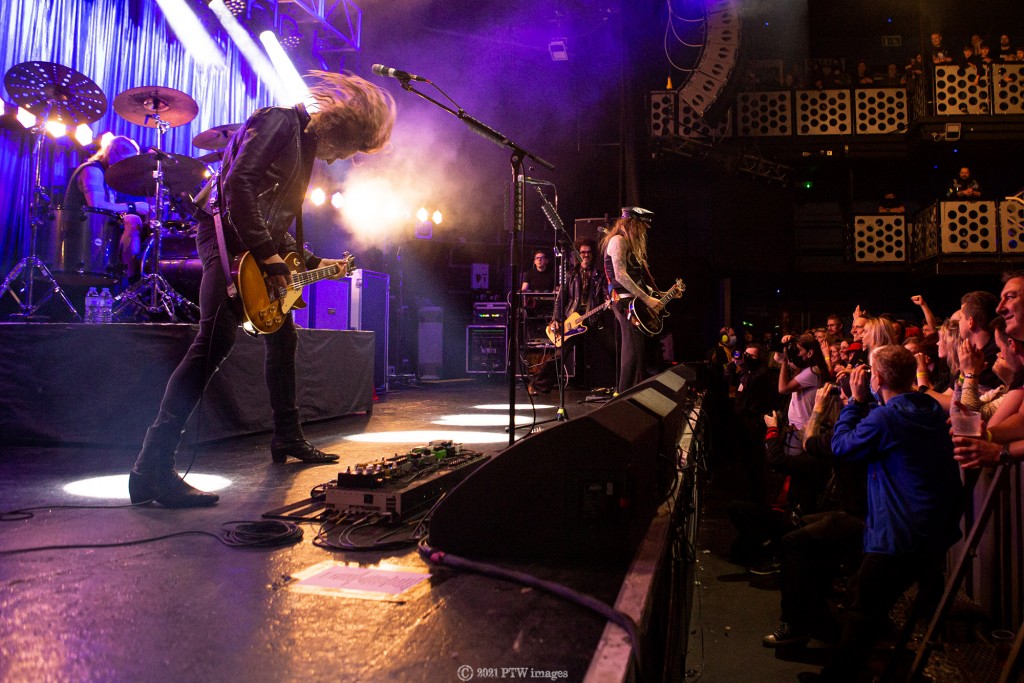 I’ll own up to having a complete fan girl moment watching the sublime Dan Hawkins riffage, on what seems like the biggest selection of guitars ever, Frankie Poullain on delivery all the rhythm needed on bass and of course, Rufus Taylor (son of Queen’s Roger Taylor) on drums.  Plus, addition support with acoustic guitar and cow bells from the limited crew.

We have a few comedy moments with Justin offering an extension cable to those filming, to enable them to charge their phones, so they don’t miss any of the show – please people stop doing this, take a few pics, put your phone away, be in the moment and enjoy it!

Fair play to Justin for stopping mid song during ‘Solid Gold’ as he realised there was a problem in the crowd, once satisfied it was sorted, the band resumed as if nothing had interrupted the evening. 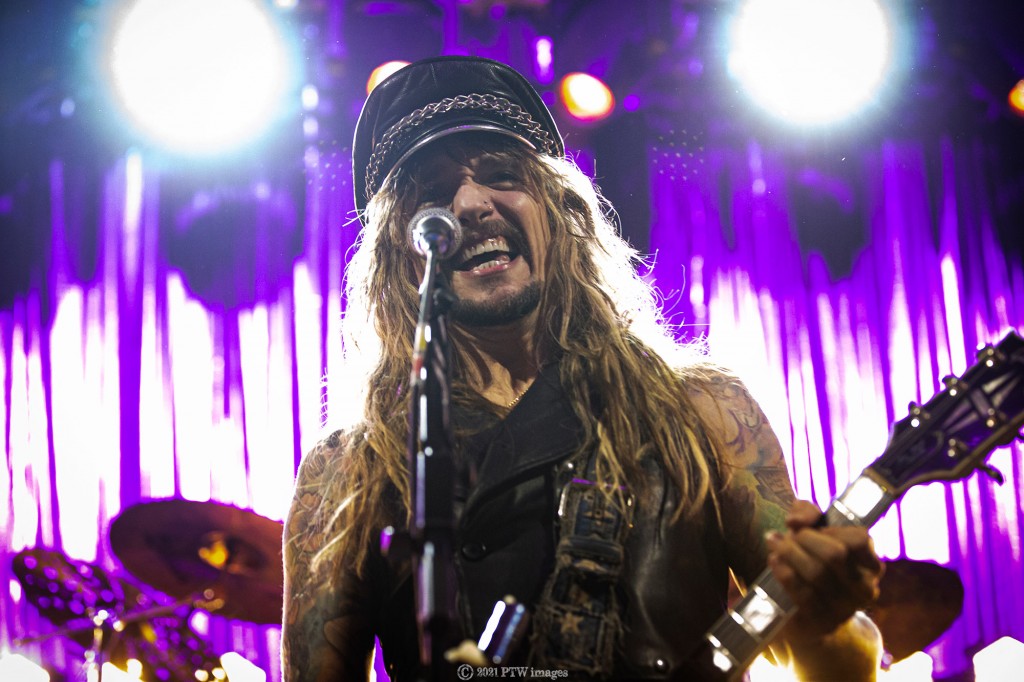 Justin having just delivered ‘Get Your Hands off my Woman’ pronounces that we all needed to be in the moment for ‘THE song’ and that it was just for us, not for the ‘watchers’ elsewhere, phones put away at last, it’s ‘I Believe in a Thing Called Love’ which is just fabulous, the crowd going mental.

For the encore, the band retake the stage in the most ridiculous Christmas outfits with Rufus having to take full credit, dressed as a Christmas tree, he hard barely room to get behind his drum kit and let alone see what he was doing, after a couple of comedy moments, they launch into a medley of Christmas songs, starting with ‘Do They Know It’s Christmas’, ‘Last Christmas’ (apparently this doesn’t count for Whamageddon), ‘Mistletoe & Wine’ and of course, culminating in ‘Christmas Time (Don’t let the bells end)’. Complete envy of Dan’s Marshall Christmas jumper – love it!

A fabulous, lots of fun evening which is everything you’d expect from The Darkness, a band that doesn’t take themselves too seriously, yet are superb musicians – they are marmite, but I love them.