Pete Feenstra chatted to Suzi Starlite and Simon Campbell for Get Ready to ROCK! Radio.  First broadcast on 12 December 2021. 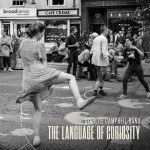 The Starlite Campbell Band’s second album ‘The Language of Curiosity’ is a cross genre, conceptual indie blues album, full of honest songs, great playing and shot through with an undeniable joie de vivre.

It’s a well written, superbly crafted and passionately delivered album with a subtle organic retro feel. 10 heartfelt songs are given their immediacy by consistent vocal harmonies, studio experimentation and plenty of spontaneity.

And though it only features a couple actual blues outings, it’s an album that explores the way various facets of the blues act as a catalyst for a broader musical canvas in which the duo’s creative process always celebrates the moment.

They fill their music with contemporary lyrics which sometimes rely on internal rhymes to give a sense of acceleration, while a liberal use of metaphor also gives them an evocative feel.

In sharp contrast, they use by an old school recording approach to emphasise the melodies and polish the harmonies, while the arrangements frequently derive their vitality from The Searchers and The Byrds style jangling guitars and some occasional George Harrison style slide.

Much of the album is built round the locked-in rhythm section of Suzi Starlite’s lilting bass lines and drummer Steve Gibson’s muscular drive. The duo make light of the job of recording remotely.

The strong lyrics are part of a seamless musical journey which reveals different aspects of the band’s music.

All the above elements are to be found in the burgeoning rock into psychedelia of ‘Said So’, which shifts from an opening Dave Davies, Kinks style riff, via a snappy hook, to a 70’s psychedelic wash favoured by welsh band Alkatraz.

There’s also an Allman Bros harmony guitar link, a manic mash up and some impressive Steve Hillage style space rock and the kind of siren sample associated with Man’s Phil Ryan back in the day.  They finish with a big crescendo featuring a passing Ray Manzarek organ motif.

This number alone gives us an early insight into the band’s unique oeuvre. For while they happily occupy the role of musical magpies – raiding the 60’s 70’s and even early 80’s with an Elvis Costello feel of the title track – it’s the way the past evolves into the present to give them something unique that makes this album so engaging.

If their debut ‘Blueberry Pie’ album was an impressive homage to the two British Blues Invasions, then this album is a significant step forward.

There’s an undeniable familiarity to their music, but it’s counter-weighted by plenty of diversity, structural depth and lyrical meaning.

They open and close ‘Distant land’ with a powerful grungy Neil Young dirge  - all piercing guitar, tub thumping rhythms, a disguised McCartney bass line and an uplifting hook – to which they add a luscious harmony laden bridge and unexpected castanets.

The guitar squalls at the end reflect the vitriolic concerns about homelessness in general and the current refugee crisis in particular.

They unashamedly raid The Faces back catalogue for the riff driven, electric piano and slide opening of ‘Gas Light’, leading to a chanted hook. The title concerns the manipulative nature of the ‘gaslighting’ concept, the subject matter of which they leave us to guess.

The ballad ‘Take Time To Grow’ has a living in the moment vibe and could easily become the band’s own anthem. A slow build – comprising Johnny Henderson on organ, special guest pianist Gabriel Del Vecchio and Simon’s jangly guitars – give way to lyrics with a poignant universality and a perfect drifting piano-led outro.

‘It Ain’t Right’ finds Suzy in Sue Foley mode with close-to-the-mic vocals which provides a striking contrast to the soft brushed backing and biting lyrics.

She’s equally good on the closing fazed vocals of ‘Ride On Cowboy’, in which a sparse intro with a subliminally strong repeated hook is subsumed by a luscious funky percussive groove.

And if the stomping single  ‘Stone Cold Crazy’ isn’t quite as convincing as what has gone before, it still boasts a catchy hook that resolves the hard driving Paul Kossoff/Free style guitar line.

‘The Language of Curiosity’ is the perfect title for an album with a feel good aesthetic cover that digs deep for meaning.

Listeners of a certain age will doubtless have fun spotting the various influences at play, but ultimately it’s the depth of the band’s own songs and their musical versatility and accessibility that gives them every right to be in the vanguard of contemporary rock-blues.

File under refreshing, innovative and close enough for the blues. ****½