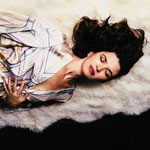 Sarah Perrotta released her debut album – ‘Drink The Sky’ (2000) – with the band Outland Dreamer when 19 and it received rave reviews.  Since that time she has worked with Garth Hudson of The Band who appeared on her second album ‘The Well’ (2008) which also featured legendary bassist Tony Levin (King Crimson, Peter Gabriel).  Levin appears on the follow up ‘Tonight’ (2010) and the latest offering which is produced by another Gabriel alumni, Jerry Marotta.

Perrotta’s vocal style reminds of prime-time Carly Simon fused with a touch of  Helen Reddy and even Imogen Heap.  And there’s a bit of Julia Fordham in there as well.

This is an album of highlights, from the opener ‘The Other Side’ via the bitter sweet ‘The Wilderness’ and the cool groove of ‘Spectrum Of Color’.

We recently reviewed the Christmas album from the band Orleans, mentioning in despatches that during their most commercially successful period Jerry Marotta was their drummer.  Marotta has lent his experienced ear to this album as well as his drums and you can’t help feeling his production is a masterstroke.  It gives free rein to Perrotta’s use of orchestration and multi-tracked backing vocals.

In short this is a sumptuous feast and would have sat nicely in Asylum’s catalogue in another era.  Classic, and classy.  *****