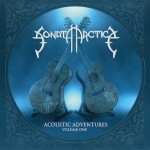 After Sonata Artica toured in 2016 with an acoustic set and then again in 2019. From these two successful tours the idea was born to capture these versions on two acoustic albums, the second of which is due later this year.

“Not all of the stuff we tried worked out which is why some songs were not recorded,” Henkka stated, adding “…a lot of the songs sound quite different from the original versions.”

The two opening songs, ‘The Rest Of The Sun Belongs To Me’ and ‘For The Sake Of Revenge’, are easy on the ear with minimal acoustic backing. Vocalist Tony Kakko sounds uncannily like Klaus Meine of Scorpions on this pair.

A cunning mix of banjo and organ run through ‘A Little Less Understanding’, one of the stand out arrangements on the album. ‘Tallulah’ is a beautiful song and not surprisingly one of their most popular songs in the streaming world.

Plenty of changes in pace too, as ‘The Wolves Die Young’ romps along, as does ‘Wolf & Raven’, where Henrik “Henkka” Klingenberg plays at lightning speed. These two songs would doubtless be great fun to hear performed live.

The whole concept works well as the band have adapted the songs, adding in extra instruments where needed, and Tony Kakko’s vocals fit the frequent quieter moments perfectly.

Sonata Artica have passed me by somewhat which is my musical loss as this band have some talent and songs. After listening to their acoustic versions of their songs on this album I have been investigating their back catalogue as I would humbly suggest you do, if not already a fan. Power and melodic metal songs never sounded so good in acoustic form. ****