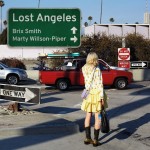 This one has an interesting story behind it. Brix Smith was originally named after The Clash standard, Guns of Brixton, which is pretty cool.

In the 90’s she went to a gig in her native USA to see John Peel’s darlings “The Fall”. In fact cult darlings really; or even “The Mighty Fall” as Peely used to say!

Anyway Brix hooked up with singer Mark E.Smith, and they drove off to a party together. “So what do you do?” said Mark.
“I’m kinda in a band” she replied
“Have you got any tapes to listen to?”
“Yes”
“Who wrote these songs – they’re genius!”
“Er, me”
So Mark E Smith married Brix and invited her to join The Fall !

The album ‘Lost Angeles’ is released as a duo with Marty Willson-Piper, long term member of “The Church” and not his first collaboration with Brix Smith. In fact he has a fine pedigree of collaborations with prominent artists. He’s also a world renowned record collector, with some 50,000 vinyl records in his highly lauded collection.

Lost Angeles was recorded 25 years ago but never released (can you see what they’re doing here?).

Marty’s jangly guitars open proceedings on ‘Backwards’, evoking The Smiths, especially when Brix’s opening line is ‘such a handsome man’ !

The songs are very well crafted, in fact excellent songs. There’s only one cover on the album, and you’ve got to love an artist who chooses one penned by Johnny, Joey, Dee Dee and Tommy Ramone

In a world 25 years ago of Oasis, Radiohead, Pulp and Manic Street Preachers they somehow fit (at least on the outside).

Made at the VIP Lounge in Penzance – need to watch out for pirates (boom boom !) ****