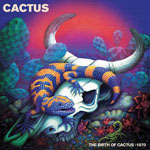 Following other heavyweights such as Iron Butterfly and Vanilla Fudge, Cactus fashioned their own brand of bluesy heavy rock at the turn of the sixties.  It was a supergroup in the making with ex-Fudgers Carmine Appice on drums and Tim Bogert on bass.

Now Cleopatra have unearthed the band’s early gig when they shared the stage with the likes of Hendrix and Grateful Dead.  It was recorded a month or so before the release of their debut album in July 1970.

I was reminded of their contemporaries Mountain as they pile through the instrumental opener ‘One Way…Or Another’ (which gave them the title of their second album) followed by ‘Sweet Sixteen’.  Their brand of riff driven blues based rock will transport you back to an early era when this genre flourished.

In 2021 we got the latest iteration of the band with ‘Tightrope’, Appice present and guitarist Jim McCarty guesting on two tracks.  But, excellent as it was,  it failed to capture the real essence of this early 1970s version which is thankfully captured here in all its raw, visceral glory. ****